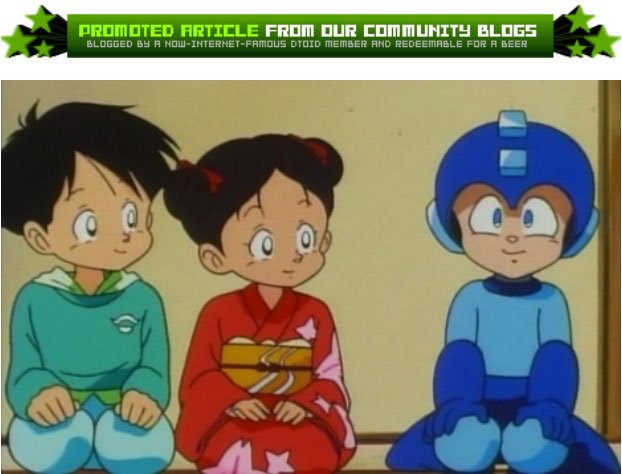 The Mega Man cartoon from the early ’90s did not hold up well. I think we all can agree on that. That doesn’t stop me from holding on to those dear memories of waking up at seven on Saturday mornings to catch the latest adventures of ‘roid-abuser Mega Man and his April O’Neil jumpsuit-wearing, vacuum arm-toting sister Roll. So what if it deviated from the source material a bit? After the mighty green midget from Captain N: The Game Master, I don’t think anyone was complaining.

Some years ago, I was browsing the aisles of Best Buy and spotted the series on DVD. I was planning on picking up the first season when I noticed another DVD right beside it titled Mega Man: Upon a Star, a properly proportioned Mega Man greeting me on the cover. Curious, I bought that instead, unaware of the treat in store for me.

I later discovered that prior to the Ruby-Spears production that we’ve come to love (hate?), a pilot was pitched featuring character designs far more faithful to their game counterparts. In 1993, a three-episode Japanese OVA based on this pilot was produced by Capcom but was never aired. It was decided that the show should be retooled into something a little edgier for American audiences, so the OVA remained MIA until its Japanese video release in 2002 and its American debut three years later. That OVA is Mega Man: Upon a Star.

Firing up the disc, it’s hard not to get pumped during the opening montage as Mega Man lays the smackdown on all the Mega Man 5 Robot Masters while the credits roll and ’80s synth rock blares. However, something quickly turned my excitement into apprehension: 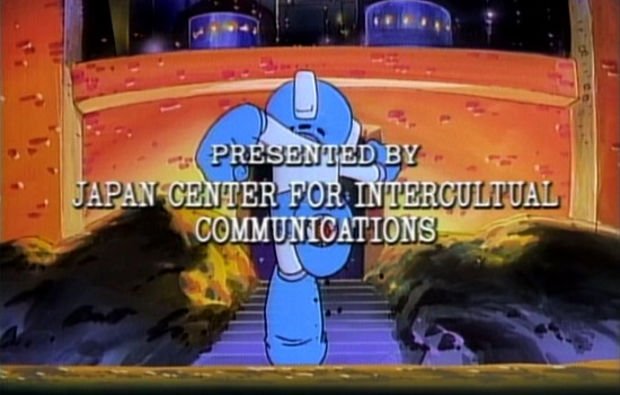 “Presented by the Japan Center for Intercultural Communications”? Aw crap, it’s an educational film! Alright, let’s assess the damage, shall we? 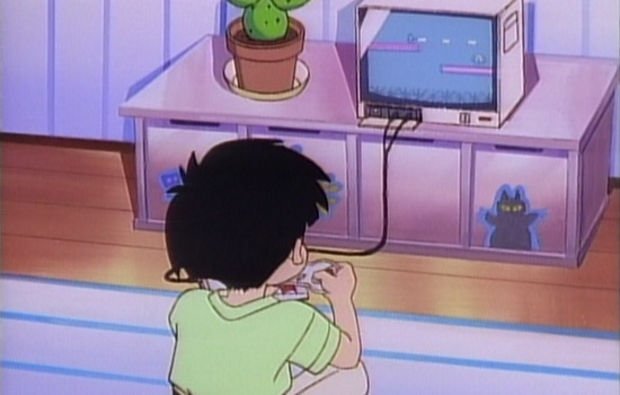 Our story begins with Japanese fifth-grader Yuuta Kobayashi who is up way past his bedtime playing his American copy of Mega Man 5 (more on that later). As he’s about to deliver the final blow to Dr. Wily, he nods off to sleep, pausing the game before collapsing on the floor. With Mega Man rendered immobile, Dr. Wily jumps out of the TV with aspirations to take over the real world. When Yuuta wakes up the following morning and unpauses the game, Mega Man jumps out as well and asks Yuuta for help tracking down Wily’s location. In order to accomplish so, Yuuta and his sister Akane must first teach Mega Man about Japanese geography and customs. 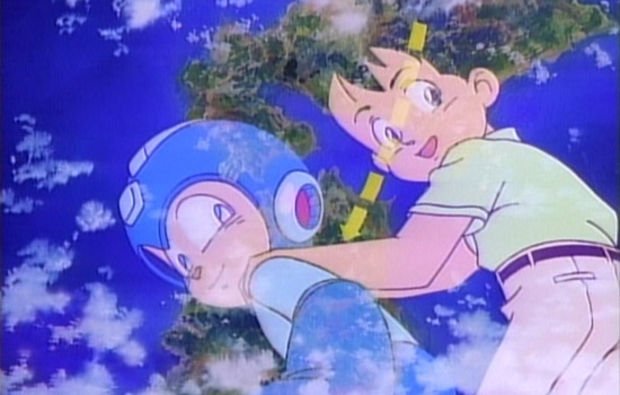 You can’t help but laugh at the inanity of it all. Wily is building a doomsday device that is certain to end all of humanity and Mega Man is busy sightseeing in Okinawa. Armed with the knowledge that Japanese children receive money on New Year’s Day and attend cram school that often ends late in the evening, Mega Man is prepared to stare cold, metal death in the eye.

Thankfully, the show never dives into CBS territory and is perfectly content with sprinkling random facts here and there. At its heart, it’s an action show that offers an introduction to Japanese lifestyles as an added bonus. Actually, I think the intention was to trick parents into thinking their kids were watching an instructional video. 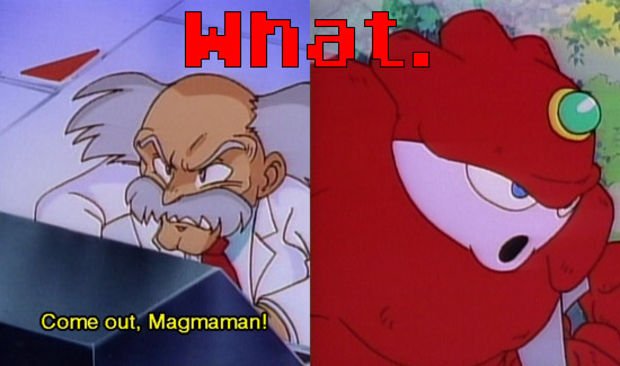 In true Wily fashion, each episode sees him plotting to turn an element of Japanese cultural significance against the population. In the first episode, Wily uses the dormant power of Mount Fuji to construct an army of Magma Men (totally unrelated to the Mega Man 9 namesake… or is it?). In the second episode, Wily steals Dr. Light’s time machine in order to gather a large collection of meteors and set them to drop on a specific day in the future, Tanabata, the Japanese star festival, when Japanese people look to the sky to wish upon the stars (say, that’s where the DVD title comes from!). In the final episode, Wily studies the nature of the typhoons that assault Japan every year in order to construct a typhoon generator with the destructive force to level the entire country.

Meanwhile, Mega Man’s short attention span proves to be his greatest nemesis: “I must find out when Dr. Wily will make his next move! There’s no time to lose… oh, what are those, Yuuta? Koinobori raised in honor of Children’s Day? How interesting! Tell me more!” 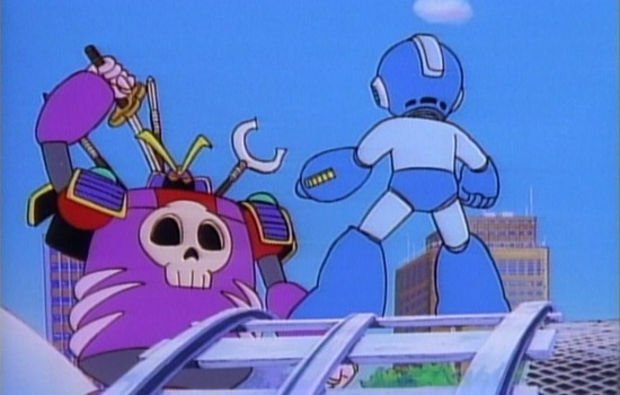 All joking aside, there is a lot for long-time Mega Man fans to legitimately enjoy. The art and animation are quite decent, remaining faithful to the official game artwork and Keiji Inafune’s original designs. Well, scratch that. The first two episodes look fantastic, but the third looks to have been farmed out to the 3rd string backup animation team. Seeing as how the OVA was the precursor to the Ruby-Spears production, it’s only natural that the Ocean Group voice acting team would be on board for both. The only actors who voiced the same characters in both shows were Scott McNeil as Dr. Wily and Jim Byrnes as Dr. Light, but that was enough for yours truly to totally geek out.

There’s also a Japanese-language track option with a curious surprise of its own. I mentioned above that when we first meet Yuuta he is playing an American copy of Mega Man 5. The title screen is clearly visible at one point: 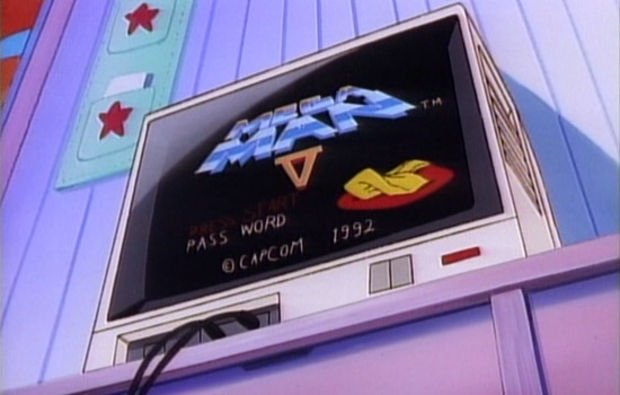 Why would a Japanese child not be playing a Japanese copy of the game? Perhaps his father is an American soldier stationed in the country? No, he is not. Throughout the entire first episode, all the characters are referenced by their Western names, i.e. “Mega Man” instead of “Rockman” and “Proto Man” instead of “Blues.” For episodes two and three, everything switches back to normal. I understand that the nature of the show as a foreigner’s introduction to Japanese culture would require tailoring towards that particular audience, but since the program was to be released both locally and abroad, why would the Japanese version commit to the same changes? And why weren’t the changes consistent across all three episodes? Chew on that for a while. 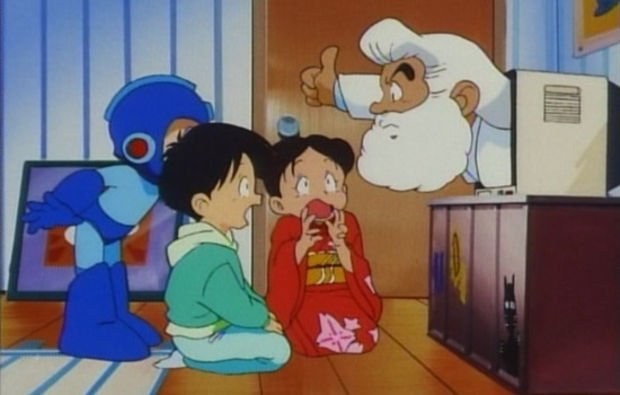 In the end, the show is pandering. It’s silly. Yeah, it’s a kids’ show. But you know what? I actually wound up liking it despite its faults. This is totally something I could have seen myself enjoying as a child. And truthfully? As forced and pace-shattering as those “The More You Know” moments are, it’s an effective way of dropping knowledge on kids while still offering the pulse-pounding action that you’ve come to expect on a Saturday morning with a bowl of Lucky Charms in your lap. The Ruby-Spears show was great for what it was, but it would have been interesting to say the least if the infotainment angle had been explored further.

I recommend trying to score a copy of Mega Man: Upon a Star off of Amazon if you want to have a good laugh or two. Come for the fanservice, stay for the grade-school level culture lessons!