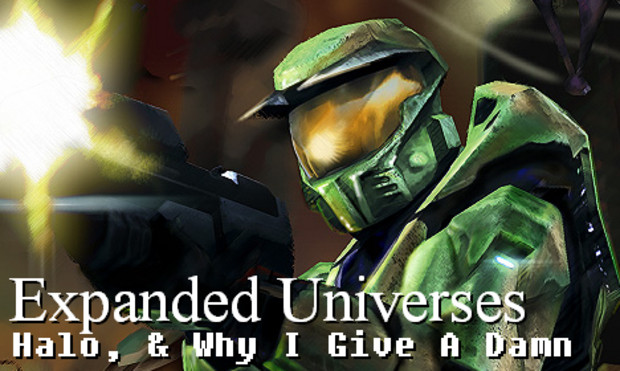 The debate on where Halo rates in the pantheon of ‘all time greats’, both in terms of all of videogames and in first person shooters. is constantly ongoing. Here at Destructoid there seems to be no exception, although from my experiences, it seems to slide more towards the discredit of the Halo series. Most flack towards the Halo trilogy, from my experiences, comes from its lack of a deep storyline primarily in the second and third installments of the game. When looking specifically at the three games in the Halo trilogy, I would see a strong foundation for these claims and I, to a point, would actually agree with the lack of story in the games.

I continue playing Halo 3 simply because I enjoy the pick up and play nature of its multiplayer. But when I first picked up my copies of both Halo 2 and Halo 3, I jumped head first into the single player because I cared about the Halo Universe. What made me give a damn about the characters and the war between humanity and the covenant?

I cared because of the expanded universe in the Halo novels. More after the break.

My first play through of the campaign of the original Halo: Combat Evolved was a fun experience, though I didn’t get into the story. For the most part I simply thought the game pulled a huge chunk of ideas from the James Cameron film Aliens (Sgt. Johnson, the nearly identical Space Marine armor, the whole sequence with the Marines prepping for combat, etc) and small bits of Starship Troopers thrown in too (but I think Bungie would prefur to say they copied Aliens, because Starship Troopers sucks). The single only real highlight from the first Halo’s story was the introduction of The Flood; which in my opinion was the best moment in the entire series and was one of the most perfectly executed sequences in gaming. But after everything was said and done Halo 1 had a stable and overall good story, but it wasn’t anything great or something to write home about.

In between the release of Halo: Combat Evolved and the rushed shit fest that was Halo 2, Bungie and Microsoft released the first three of the Halo novels, respectfully penned by Eric Nylund and William C. Dietz. Now I for the record am not a huge fan of book reading, I blame this on high school for making me read shit books I didn’t care about. The only book I seriously got into during high school was Ender’s Game and that was partially due to my traditional interest in the science-fiction genre.

When I first saw Halo: The Fall of Reach on bookshelves, I approached it with a hesitant kind of joy. The joy obviously stemmed from my enjoyment of science fiction and since I felt the game pulled heavily from Aliens, a movie I hold high on my list of favorites, I figured this would be up my alley. My hesitancy stemmed from this book potentially being a waste of time that was simply meant as marketing for the game. But alas, I snagged a copy of Fall of Reach and took it with me on a family trip that weekend figuring I’d use it as a good way to at least kill time during the road trip. In a strange twist of fate, the book ended up becoming my entire weekend. I simply couldn’t put the book down for some reason and found myself getting deep into everything that the book threw at me. I actually cared about the characters and the things they went through. I was intrigued by the origin of John and the other Spartans and the neo-Wolverine augmentations they went through to become the super soldiers. It was interesting to find out about the origin and kind of AI that Cortana was, how her synaptic networks were from the creator of the Spartan project and how she would become so advanced that she would eventually think herself to death. Fall of Reach showed how divided humanity itself was before the Covenant arrived, that the MJOLNIR armor could crush the arm of a normal human, how there was opposition to the original Spartan project from other military officials, and gave us the first witty remarks back and forth from Master Chief and Cortana.

Ultimately the fate of everyone in Fall of Reach is known if you played the game, which acts as kind of a downer yet adds a bit of tragedy knowing that a lot of Master Chief’s friends will face doom. However, as other books came out based in Halo’s universe, great moments kept popping up left and right that continued to make me care about the characters that appear and do not appear within the novels. Halo: The Flood hit shelves about a year and a half later, and it is probably the weakest book of the original three to be released. This is probably just due to the fact that this book covers the same time frame as the first game, so a lot of the storyline is going to be a ‘been there done that’ to people who had played the game. Despite this the book had definite strong points primarily when it focused onto some of the supporting cast. The stories revolving around the Alpha Base team, Private Jenkins’ struggle to end his own life after being infected by The Flood, and Captain Keyes’ struggle to at least keep the mental side of his humanity in tact while being assimilated by the Flood all add levels of depth that were absent from the game.

Upon finishing the first two books I went back and played through the first campaign again, and everything felt like a completely fresh and different experience. This time through I actually found myself caring about the characters and a larger portion of the events within the game. Everything simply seemed to make sense a little bit more for me and at the same time it had me craving for more in that kind of Star Wars-esk kind of way.

While Fall of Reach established the foundation and back story to a lot of the Halo Universe, it’s Halo: First Strike that added the most to the immediate Halo Universe since the videogame sequels were still in development, as well as Eric Nylund returning to the universe. The book picked up were the game and the book The Flood left off as Master Chief finds other survivors from the destruction of Halo. Over the course of First Strike we find out just how Sgt. Johnson survived being infected by the Flood, and how Master Chief has to choose between following protocol and following ‘what’s right’ in regards to Johnson’s fate. Master Chief is hinted as having an innate fear of the Flood as memories of them from Halo seem to haunt him. Some Spartans once thought dead turned out to be alive either floating amongst the debris in cryo-tubes around Halo or deep underground on the planet Reach as well.

First Strike set the stage for the initial Covenant invasion of Earth, which as we know is the foundation for Halo 2’s opening, as well hinted towards the origin of The Arbiter. It was in this installment of the Halo Expanded Universe that we got introduced to the Brutes, who first appeared in Halo 2, and Engineers, who made their first appearance in Halo Wars. The destructive power of the Brutes was quickly established as a pack of them almost take out Master Chief and a small Spartan team on a mission to destroy a Covenant shipyard.

I have a love/hate relationship with the Halo Expanded Universe. I love it because the novelized contributions to the universe just seem to make sense in terms of feeling like continuations of the videogames. Everything within its universe retroactively made me appreciate the original Halo game and every little event that happened during it. They’re obviously not anything that’s going to be required in high school curriculums but they are great reads and definitely pull you into the universe that is Halo, the best comparison I can make for the feel and pull of the Halo expanded universe is by comparing it to the Star Wars or Star Trek expanded universes.

I “hate” the Halo universe because the one major downside is how the actual Halo games seemingly neglect the rest of the universe. After finishing First Strike, I was, needless to say, pumped for Halo 2. I hoped we’d get some badass battles with a few other Spartans alongside since First Strike established that other Spartans were still alive, see Master Chief show signs of fear seeing the Flood return, and even possibly witness Cortana show signs of her self-demise. However, the sequels make no connections to the rest of the Halo Universe what so ever. The only passing references to the books that we get come in subtle ways; Sgt. Johnson simply replies “it’s classified” when asked how he survived Halo, a few of Cortana’s broken transmissions in Halo 3 as well as Cortana’s opening monologue pull from Fall of Reach a little bit, Engineers don’t appear until the prequel game Halo Wars, and beyond that seemingly everything else is omitted from the game’s story.

Why do I get sucked into the Halo expanded universe? I’m kind of a sci-fi nerd with a creative spirit and, oddly enough, the original game having a good but not great story created the urge to find out more, creating a perfect storm in my mind. And after discovering that the first few novels in this universe were actually good I simply couldn’t escape the pull of it anymore. Halo’s expanded universe itself made me give a damn about the characters in the games and the overall story that is Halo, something that rarely happens for me when it comes to things such as media based on videogames.