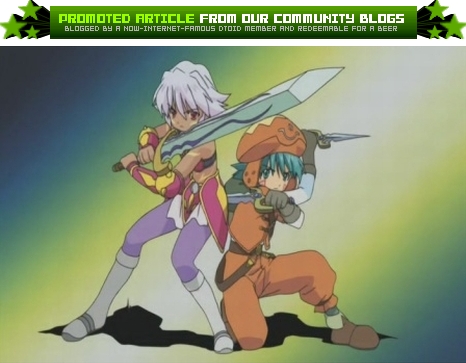 Most of the material involved for an expanded universe ends up being released in the same way. Usually a shed-load of media in the aftermath of the success of its core film or game, and sometimes a little something to go alongside a new release, like the animation that went with EA’s Dead Space.

There is an exception to the rule, however. If there is a company behind the product believes the idea is truly special, one that has a lot of money to throw around, and can get enough promotion on the idea to get the public to notice, then it can do multiple ‘media takes’ on the core product and release them at the same time. The multiple assault on printed paper, code and animation cannot fail to be noticed by the masses, and the profits will snowball.

CyberConnect2 had an idea called .Hack and Bandai tried to push the resulting ‘core game’ as special. But in this case, the ‘core videogame’ proved to be outshone by its own universe for a few particular reasons.

Listing the whole universe is going to take crap-tons of time, so I’ll only list the parts I’ve come into contact with, and form the initial releases alongside the ‘core game’.

.Hack was released on Playstation 2 on four separate discs, named Infection, Mutation, Outbreak and Quarantine. You are asked to enter two names; your name and the name of the character you are supposed to be playing as. In the default case, you will call your character Kite.

You start the game from the desktop of a computer installed with the Altmit OS (the operating system of the game you are playing). The game in question , made by fictitious CC Corporation, is a pseudo-MMORPG called ‘The World’. I know that title sucks, but there is a reason why the game was named that way; it just looks rather vague and silly at the start compared to our real-world versions of MMO’s nevertheless.

You are invited to the game by your friend who uses the online moniker of Orca, and you start off the game with him introducing the basics. Then things get awry; whilst traversing a map, Orca and Kite are assailed by an unbeatable monster. In spite of Orca’s high level, he is not only defeated alongside Kite, but withdraws into a coma in the real world.

Kite avoids his friend’s fate, and receives a bracelet from a mysterious A.I. that appears in the game. Through a series of further encounters, he ends up realising that the bracelet he has been given can ‘hack’ parts of the game, turning the ‘unbeatable’ monsters into extremely feeble types, as well as accessing ‘protected areas’ through the hacking of gates. Through this activity, Kite heads toward a conclusion that will gain him many allies, see more players become comatose and pit him against a danger that potentially matches that of a disaster that happened several years ago called Pluto’s Kiss….

We see Junichiro Tokuoka, a former CC Corporation employee, in .Hack//Liminality, turning up around the events of the game to try and figure out why players are going into comas. If you can bear to look at his garish shirt in the first feature, In the Case of Mai Minase, then congratulations, you can probably have the fortitude to watch the other three parts, Yuki Aihara, Kyoko Tohno and Trismegistus.

.Hack//Sign is set in 2010, months before the events of the game, and presents us with the player character Tsukasa, who cannot log out of ‘The World’. He meets up with several players in the game to find out what has happened and how to escape the game….

A player matching Tsukasa’s description is revealed in the second novel of .Hack//A.I. Buster, and is encountered by a system administrator called Kazushi Watarai, using his player-character Albireo. The following incident prompts Watarai to leave the CC Corporation, as well as a distraught Saki Shibiyama, who takes control of the Cobalt Knights previously under control of Watarai…

…and Saki then turns up in .Hack//Legend of the Twilight under the player name ‘Kamui’. The manga details the events years after the game, the plot involving two players who have won skins that are based on the heroes of the game, Kite and Blackrose.

I had two reasons for purchasing the game; one was that I liked RPGs, the other being the character design was made by Yoshiyuki Sadamoto, who used his skills for Neon Genesis Evangelion. You have to remember that I live in the UK, that Japanese culture was breaking through more into the mainstream here. I really wanted to try this game out.

In the end, I was disappointed a little. The game itself was rudimentary; press button for a physical attack that didn’t feel or sound like it made contact. Travel around maps that, for all the graphical changes, constructed with set shapes of rooms. Endure the feeling that you are only doing two types of main quests; fetch the item at the bottom of the dungeon, or battle the boss at the bottom of the dungeon. Do a few simple mini-quests. Trade a few items with NPCs. Listen to the same dialogue by the other characters you put in the party over and over again. Listen to bad English voice acting by lesser characters. The only saving grace is the hacking mechanic; you can develop it to get more abilities, but use it too much, and you end the game by corrupting your character indefinitely. A nice touch, but when you are doing a poor mirroring of an MMO, that’s trivial.

Where does the expanded universe come into this? Well, I could say it puts a few nails into the coffin of any real desire to play the whole game again. The first strike is made by the fact that the expanded universe has the information that makes the story in the game less vague. Every RPG’s strength lies in its story, and when only the basic information is given there, with less explanation than you’d like, then your experience suffers.

The second mark on the game thanks to the expanded universe is the fact that the universe is more interesting than the game. I enjoyed finding out certain details in the .Hack novels, and the manga, although not the best in the world, was enjoyable. For someone whose main interest is in videogames, however, this puts the ‘core game’ even further in the shade. They also list things that could have made it into the game, like personal rooms in root towns and the inclusion of a Werewolf class. You have four DVDs, and yet we are given a low-frills RPG. I believe there were big opportunities missed here.

No, I haven’t watched .Hack//Sign, but I’m gathering that, on the basis of review comments listed on Wikipedia, that it will have a higher chance of being more entertaining than the .Hack videogame (although there does seem to have its naysayers) who primarily point at the slow pacing of the show. No matter if you are given the ability to play as characters from .Hack//Sign at the end of the forth disc, or trying to arouse curiosity at exactly is going to happen when you follow the quest after the ending of the game. I would only find it just above viewing horse racing on television as stimulating, especially if that is the first time you’ve seen the Sign characters.

A third strike is made by two missing episodes of .Hack//Liminality in Europe. At least, possibly. You see, the first two episodes were released alongside the first two games, and other two episodes are listed in the instruction manuals of the other two. But they are not there. Are they on the game discs? I don’t know. What is for sure is that they might be up on the internet. So what am I complaining about? Well, if Bandai/CyberConnect2 wanted to get people in Europe to buy the games with the hope of getting the episode on DVD, then they would up the chances of getting more money. This decision may have cost people the only reason to buy the game. There is the issue of the game starting out at £30-40 in some places. Multiply that by four and that is a very costly hole in your pocket for a ‘meh’ RPG. Then again, that is an issue in the game’s area, not the expanded universe. I was lucky enough to get the last two games as presents.

The end result is that Europe has not seen a release of the .Hack//G.U. games, but we still get more .Hack merchandise. For example, if we can’t get the game, but can get an anime version of Legend of the Twilight, more manga and more items based on a game we may never get in contact with, then the expanded universe has faired better than its ‘core game’. And as for Sadamoto’s efforts, he’s got a lot of people cosplaying.

Ultimately, the publishers and creators just want your money. The expanded universe here is proof of that, clearly holding back parts of the story in one piece of work in order to try and get you to exchange money for the next. But if you are going to rant about the blatant wallet-raping that forms the basis of capitalism, remember, this isn’t illegal. We give our money to Nintendo for pieces of Mario and The Legend of Zelda, and they do their job very well. We are rewarded with ‘core games’ and materials of high standards, and usually end up with a few bits of expanded universe material that aren’t completely up to scratch. In the case of .Hack, it’s the other way around. Its universe, in one way or another, only helps to contrast this quality gap even more.