As you may have already noticed from our earlier story, Valve has announced a brand new campaign for Left 4 Dead, known to the world as “Crash Course.” We were invited to Valve’s offices in Seattle to check the new levels out and give you the skinny on what to expect. Things are not yet completely finalized, so a few things I saw may be changed before release, but if you want some general impressions on this brand new campaign, you’re in the right place.

Read on for our full, exclusive preview of Crash Course.

As already detailed, Crash Course is designed purely for Versus Play. It can of course be played in a straight Campaign mode, and it works with Survival mode, but the shorter length and more intense combat situations are geared toward competition. With eight of us kicking seven shades of crap out of each other in Valve’s office, we played through the game multiple times, and before we begin with the details, let me just confirm this straight away — it’s very fun.

Crash Course begins shortly after the events of No Mercy, with The Survivors starting out by the crashed remains of the helicopter that had rescued them. The new dialog was not fully in place yet, but I was informed that the helicopter pilot was infected, and Zoey’s been blamed for crashing it after she wigged out and shot him. A whole selection of new audio has been recorded especially for this campaign, and it’s sounding like the wit and patter that the game’s become known for will be in full effect.

The new campaign is much shorter than the ones you’re used to, which is a deliberate decision on the part of Valve. I’d been told that players generally felt that full campaigns were too long for multiplayer matches, and that they generally stuck around for about half of one. With that in mind, Crash Course consists only of two chapters, which sounds stingy, but is a perfect length for a quicker, more decisive Versus match that should encourage players to stay with a battle from beginning to end.

Since we’ve got a shorter campaign, much more has been packed into a smaller space. Lucky players who know where to look can upgrade to second-tier weaponry almost straight away. However, they’ll have their work cut out for them, because there’s a chance to get swamped by the horde right from the very beginning. The levels have also been designed to give Special Infected plenty of advantages, if they know the terrain. For instance, there are a greater amount of high buildings and close-knit walls for Hunters to perfect their pouncing techniques, and there are some decent hiding places for Boomers to jump out and do that thing they do so well.

Each of the two chapters have their own major horde event as well, with the first one taking place on a blocked bridge. In order to clear the blockage of abandoned cars, the Survivors need to activate an artillery cannon to blow the vehicles out of the way. The infected then swarm in on the area, which consists of a wide open space and a large house. There’s actually not very much the Special Infected can do here. The space is too open for Boomers and Hunters to really get an advantage, and Smokers can be confounded if the Survivors take refuge in the building. Still, the common zombies will provide players with enough problems.

When players cross the bridge itself, they better pray that a Tank doesn’t make an appearance. Absolutely littered with cars, this area gives the Tank an incredibly good chance of humiliating Survivors. Luckily I was on the Infected team when this happened, so I got to feel pretty great about things.

Fans of Left 4 Dead‘s Safe House graffiti will be pleased to know that it returns in Crash Course. It was still being worked on when I played, so the walls were a bit bare. However, there was a bit of poetry scrawled on one surface, which was followed by fresher graffiti absolutely ripping the prose apart. One particular criticism read: “I’m in the middle of a zombie apocalypse and this poem is the worst thing to happen to me.” Left 4 Dead writer Chet Faliszek pointed out the graffiti and noted, “Not even zombies can stop people griefing.” 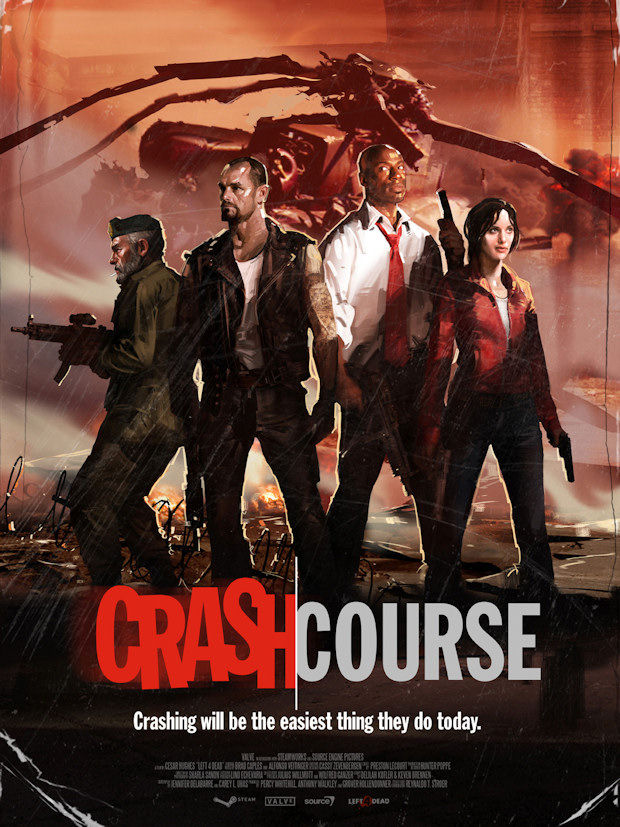 The second chapter, by far, is one of the most awesome yet seen in Left 4 Dead. There are a number of surprises in store, so be warned that from here on in, I’m giving out spoilers. If you want to be spooked by this game’s grand finale, stop reading. The rest of you, carry on …

The big finish of Crash Course sees the Survivors reach a garage, where a bus is waiting at the top of a vehicle elevator, just out of reach. In what looks to be an homage to the Dawn of the Dead remake, the bus is armor-plated and designed to railroad the fearless foursome through any marauding army of infected. Unfortunately, players must first get the bus down, and that requires use of a generator located in the parking lot outside.

The generator, unlike usual event alerts, takes time to activate, with players having to wait while the power charges up. As an extra surprise, the generator sometimes fails, regarding a second activation. Once it’s powered, the bus lowers and the horde comes. Survivors can hide in the garage, where there’s a mounted machine gun and a stack of boxes, or climb atop a coach outside, where ammo is conveniently located. Either location is fraught with peril, as the infected will pour in from literally everywhere. After several long minutes of sustained horde attack, the really bad thing happens.

All the power goes out.

Players are now stuck in the dark, surrounded by zombies, and need to fight their way back to the generator in order to power it on again, stuck in the open and having to slowly wait for the power to return. Of course, a Tank will make his appearance now, before or after, and all this stress combined makes for easily the most intense and challenging finale in the game. Should players survive, the bus lowers in time and those who made it hop in the back, at which time the bus will drive away, mowing down any infected left standing.

Ultimately, Crash Course is an incredibly worthy campaign, perfectly designed for Versus. In the time it normally takes to play one campaign, we got quite a few matches in, with the overall time for the new maps taking around twenty-five minutes to complete. If you’re a big Left 4 Dead fan, you really need to play Crash Course when it comes out. These quite possibly could be your favorite maps yet.