Neversoft has already announced a bevy of new features for Guitar Hero 5. From its on-the-fly instrument switching to its new take on competitive multiplayer with its “RockFest” modes to its “Party Play,” it’s certainly not just a rehash of last year’s World Tour.

With Guitar Hero 5, Neversoft is also looking to add considerable replay value and depth to both on-disc tracks and its downloadable content, in the form of song “Challenges.”

“Basically we wanted to really give players another layer of replayability on a song,” Neversoft’s Brian Bright says. “I mean, if you get four or five stars in the past, in career mode, you’ll basically be done with a song. Maybe you’ll go to ‘full combo,’ but that’s a fairly hardcore step for most players.”

Guitar Hero 5 should now offer more, for players of all skill levels. Hit the jump for an exclusive first look.

For each song challenge, the game presents three tiers of difficulty — Gold, Platinum, and Diamond. The challenges for the on-disc songs are specific to those individual tracks. Players are told what the song-specific challenges and tiers are before starting a song, so they know they know their goals before they begin. As they play the song and begin working towards the challenge, a “record” icon shows up next to the note highway and begins to fill in. When it fills in all of the way, the center of the record will turn Gold, acting as a marker to let players know they’ve at least obtained gold status. 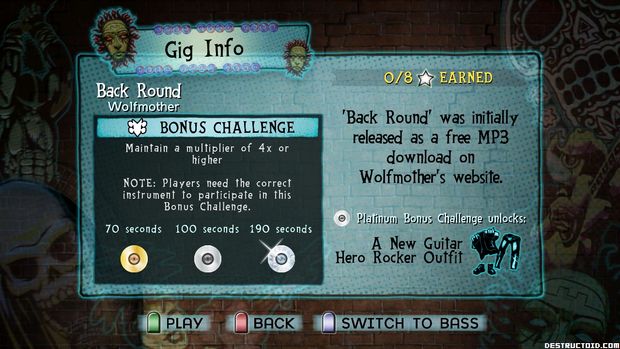 Bright gives us an example of one of the challenges.

In this instance, completing the Gold level challenge means hitting 5 of the “fame” notes, 20 for Platinum, and 24 for Diamond. The different thresholds are set as goals for players of varying skill levels, with Gold being obtainable by “Easy” or “Medium” level players, and Diamond only by those who play on “Expert.”

“The cool thing is, we did want some of the Diamond Level challenges to be fairly difficult, because you know there are plenty of ‘Expert’ level players out there at this point,” Bright explains. “So we did want to give them a challenge, [but] we didn’t want them to be frustrating or annoying. They’re all tuned to be fun; they’re not hoops you have to jump through. You don’t even have to do them if you don’t want.”

But you’re probably going to want to nail them, not just for personal satisfaction, but to obtain all of Guitar Hero 5’s unlockable items, characters, venues, and in-game instruments. Gone is the cash earned to purchase unlockables, replaced by the challenges and stars earned to mark your career progression.  Completing the aforementioned “Fame” challenge and achieving “Platinum” unlocks the “Sartorial Eloquence” outfit for Guitar Hero rocker Johnny.

As such, Bright says that you’ll be able to earn a total of nine stars while playing these challenges.

“You can get between one and six stars on a song,” he tells us. “You’d have to play really bad to get one, and you’d have to play perfect for six. Then you can earn an extra three stars by earning the different levels of those Gold, Platinum, and Diamond challenges.” 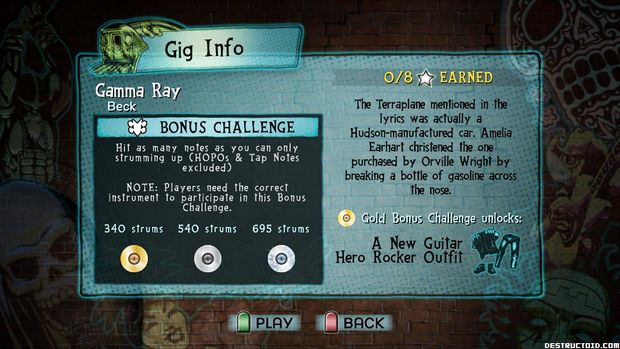 Because some of the challenges are instrument-specific — the challenge for Beck’s “Gamma Ray” is tied to the song’s prominent bass line, for instance — Guitar Hero 5’s on-the-fly instrument switching comes in to play. At any point during a gig or a song you can easily switch from one instrument to another, in order to complete a challenge, by pressing a button and navigating a simple menu.

Is there a drum challenge and you don’t have a drum kit, or simply aren’t skilled enough to reach the Diamond tier? A full band challenge and you don’t have a full band (or friends)? No worries. Bright notes that if one member of a full band nails a challenge, the unlockable is awarded to everyone playing. This also extends to online full-band play. Need a full band or an Expert-level drummer to help you out in your career? Jump online and find one in the game’s online lobby.

In addition to the song-specific gigs, the career mode will feature open gig challenges. In these open challenges, real-world sponsors (which Neversoft and Activision aren’t naming just yet) offer up challenges geared toward specific instruments. In these gigs, any song from the game disc or downloadable content can be chosen to complete the challenge. Choosing the correct songs will be key.

These challenges are more general, tied to traditional Guitar Hero gameplay, rather than playing to a song’s strengths. For example, the task may be to score 100,000 points in Star Power, or to use the whammy for 60 seconds. Or as a full band, maintaining a 4x multiplier for a specified amount of time. When picking the songs, you’ll want to pick something with a lot of opportunities to use the guitar’s whammy bar, or a song that will let you use longer Star Power streaks. 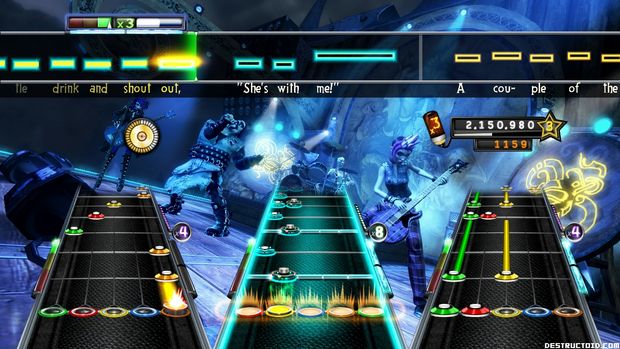 With 80-plus songs on the disc, and open challenges, it sounds like Neversoft is really pushing to extend the replay value of the music in Guitar Hero 5, as well as keep players interested in the game.

“There’s always a carrot out there for every song,” Bright says.

Below, check out a few of these carrots — Activision has provided us with some example challenges to whet your appetite. 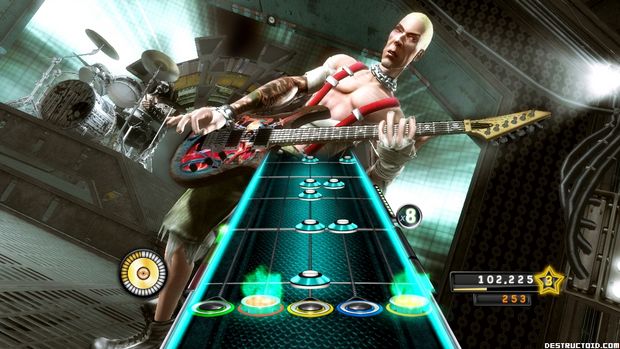 Band – Score as many points as possible

Bassist – Hit as many notes as you can only strumming up

“In My Place” – Coldplay

Guitarist – Whammy the sustains as long as possible

Vocalist – Nail the descending “fames” at the end of the song.

Band – Score as much as you can while in Star Power

Band – Refill the Star Power Meter as many times as possible

Guitarist – Maintain a multiplier of 4x or higher.

Band – Score as many points as possible

“Runnin’ Down a Dream” – Tom Petty

Guitarist – Whammy the sustains as long as possible

Bassist – Maintain a multiplier of 4x or higher

Bassist – Hit as many open notes as you can

Guitarist – Get the highest note streak you can

Bassist – Hit as many open notes as you can