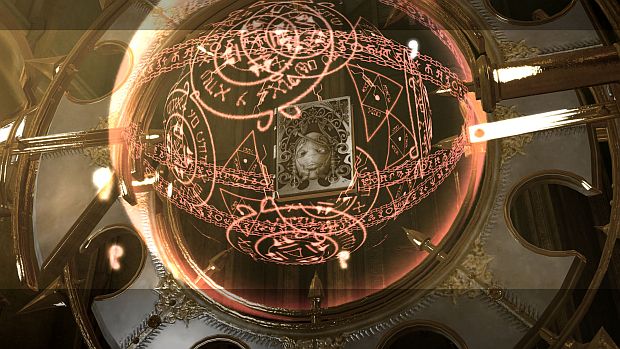 Looking back at my preview of Square Enix’s NIER, one can see that there is a whole lot going on. From the plot alone it is obvious that the game has a lot of unanswered questions and talking points.  Never mind the delicious bit of transgendered goodness that has been haunting the game since it was first announced, there is plenty about NIER that is confusing beside ambiguous fleshy bits.

So answers, even with a decent preview, are still up in the air with NIER. Thankfully, between some international emails, questions between Japan and the States, translations, (and translations of the translations) we were able to get some exclusive information on NIER. Follow the jump for what we discovered, especially if you like your Action-RPGs with a dash of dark quirk. 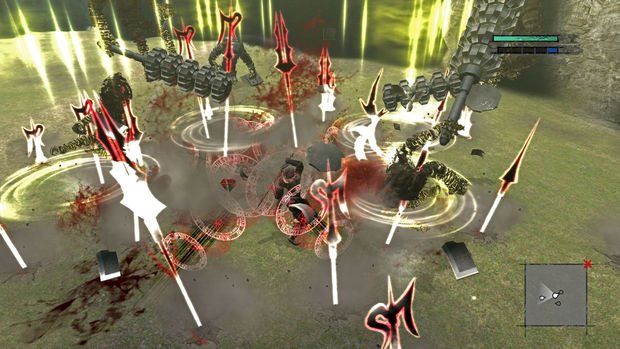 One of the most obvious starting off points was the story. I really wanted to talk to my representative  with Square Enix about whether or not NIER might be too complex and bothersome for gamers. “We don’t think so,” they said. “NIER is rated M for Mature, and it is designed for a sophisticated, adult audience. It is also an RPG, a genre that is known for having complex, on-going storylines.

They continued: “It gets a bit complicated when trying to explain the entire story in one sitting, but the intent is to make the first play-through a straight-forward experience for players skimming the surface of the game (and we hope no one has issues there!). The episodes are short and to the point, with clear themes of “good vs. evil”. What we aimed for was a complexity that becomes more and more evident as players develop further understanding of the story.”

It was funny that they brought up the element of maturity for a game. For example, NIER may be one of the most recent games to feature the transgendered character of Kainé. We know there has been a lot of talk about her in the press, but we really wanted to get the Japanese perspective on the situation. When asked about that, our contact mentioned that “Kainé is a character that has attracted a lot of attention, and for many reasons. First and foremost, she is an attractive and very powerful warrior. She stands out in any screenshot we release.” Alright, seems fair enough. 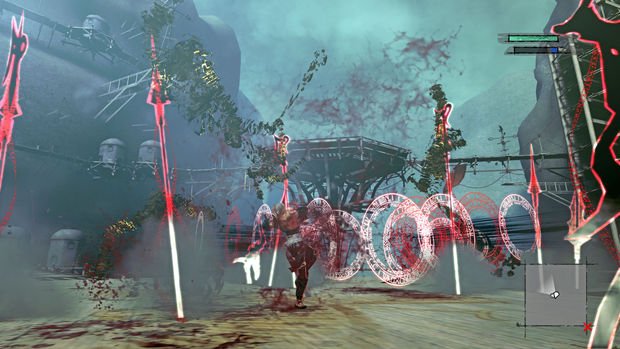 However, it was with the second half of their response that we might see the end of Kainé-drama: “Second, it has been revealed that she is a hermaphrodite, a detail that became a somewhat sensational factoid that reappears quite often and has been discussed ad nauseum in forums. The truth is, her character was developed with the fact that she was a hermaphrodite as a basic part of who she is – we never considered that it would become such a major discussion point.”

So there you go! She has got boy and girl parts, but she’s a normal, well-rounded human being. Seems like we got a lesson in tolerance!

However, an accepted human being she may be, but a potty mouth she remains. Anyone who has seen the teaser trailer for NIER where  Kainé uses some naughty language to get what she wants was a little surprised to hear such a thing coming from a Square Enix published game. We asked about that. 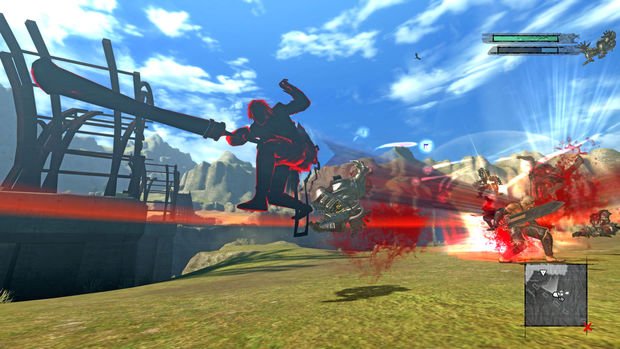 “This content and attitude might be seen as a change of course for Square Enix from the outside, but committing to deep development of unique and interesting characters has always been a staple of Square Enix, so we don’t really see it that way. Kaine has had a difficult life for many reasons and has learned her powerful combat abilities through struggle. She does have an extensive vocabulary and is not afraid to express herself using strong language. It is core to her character and helps define exactly who she is.”

She’s only one companion character, however, and her story is just one of many the NIER will tell. We were reminded of this when our representative said that “The companion players are not only critical story points, but they also will fight alongside Nier throughout the game. They will not only act on their own, but you will be able to issue directions to them – such as attack, defend, etc – to help coordinate your actions and design the fight to your liking.” 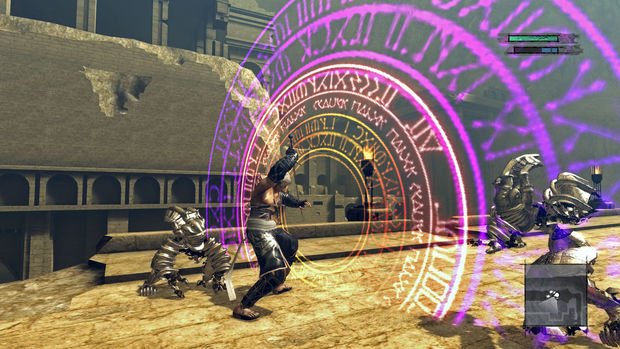 If you remember from that video, the character receiving her vice is someone called Grimoire Weiss. He’s a talking book, actually, one that is very important to the game. We asked about him, as all of the representatives I had worked with were rather coy about this character. They said that “Grimoire Weiss is, to begin with, a book. But he is not a book in the way that you or I think of them, which should be obvious by the fact that I called a book ‘he.’ Grimoire Weiss is essentially a character – a companion to Nier who possesses incredible power and knowledge. He has his own personality and attitude. Nier and Weiss work together to try and unravel the mystery of the Black Scrawl and defeat enemies such as Shades.

“In the lore of the game, Nier discovers Grimoire Weiss being held captive in a shrine, guarded by massive golems, and frees him from his bonds. In return, Grimoire Weiss lends his power to Nier, which in practical gameplay terms is what allows the player to have access to a variety of powerful magic spells. Grimoire Weiss also enables Nier to unlock other abilities, such as enhancing his weapons, martial arts moves and magical spells with powerful ‘Words’ found throughout the game. Defining Grimoire Weiss as good or evil is a difficult question, and one that the player will only truly understand after playing through NIER.” 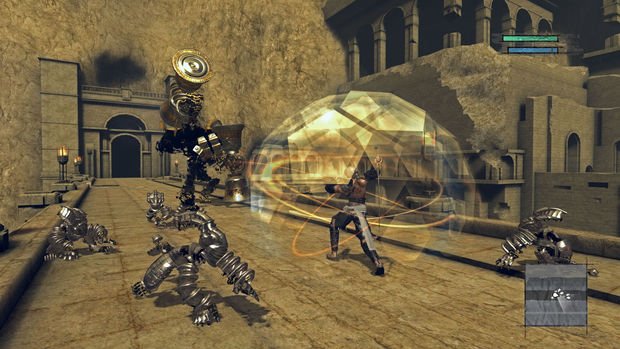 One confusing element was the importance of these book characters, as our lovely source can “confirm that there are additional books in the game. Whether they are friends or foes, good or evil… that’s part of the mystery of our storyline that will be unraveled later.”

Like any good Action-RPG, magic is going to play an important role in the experience. NIER is no different, and the experience of the game is tied to earning, using, and modifying spells. If you remember form my preview, there are “words” that can be used to modify weapons and armor. It looks like they are more useful than that. “The magic system is designed to provide Nier with the ability to face off with ever-more challenging enemies and these powers will grow and develop along with the player’s experience and abilities.  In addition, the magic system has been designed to be upgraded and customized with ‘Words’ so that individual players can design their spells to fit their gameplay style.”

They continue saying that “by choosing from the variety of magic spells and combining those choices with carefully selected ‘Words’ to augment those spells, players can tweak the game to fit their preferred play style, whether they prefer ranged spells, or area of effect abilities or if they like to add resistance capabilities to their own traits or apply weaknesses to enemies. 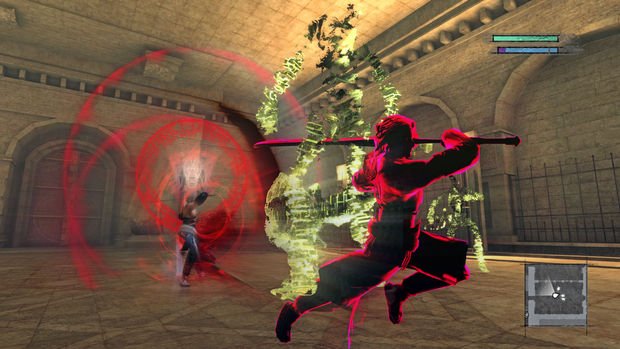 Finally, before we finished, I wanted to ask them about the line “nothing is as it seems,” which was repeated to me continually as I watched the game being played. “All of these controversies,” they said, “are part of the story or character development, but to be sure, there are major turning points in the game that will upend everything you thought you believed. We say ‘nothing is as it seems’ because there is a lot we are not able to discuss – anyone who plays NIER will find themselves very surprised when the reality is revealed. Learning these truths is part of the journey of the game.”