A couple days ago, I received an email asking me if I wanted to check out Other Ocean’s studios, where they’re currently working on a game based on The War of the Worlds. The email noted two very specific things: first, this game has nothing to do with the Tom Cruise movie of the same name, other than being based on the same source material. I’m pretty sure everyone’s sick of Tom Cruise these days, so that’s good.

Second, this game was described as an homage to old rotoscoped evasion-based platformers like Out Of This World and Flashback. I’m always game for an alien invasion, but this is the part that really caught my attention. 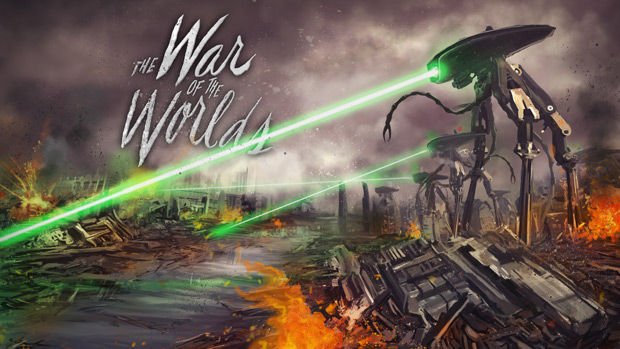 The War of The Worlds (PSN, XBLA [Previewed])
Developer: Other Ocean Interactive
Publisher: Paramount Digital Entertainment
To Be Released: 2011

At the studio, I sat down with Other Ocean’s head of development Mike Mika. He gave me the rundown of his career history, as well as that of Other Ocean. Other Ocean’s most recent work includes the Xbox Live Arcade version of Castlevania: Symphony of the Night, Dark Void Zero, and all the iOS incarnations of Super Monkey Ball. If that’s not recent enough for you, they were also the guys behind that ridiculous Bulletstorm promotional game, The Duty Calls: The Calm Before The Storm. As much as I wasn’t feeling Bulletstorm, I’ve gotta admit that was really well done.

Mike compared the studio to The A-Team, in the sense that they’re a group of industry veterans who have no problem tackling really weird projects. Most of their work up until this point has been been tied in with larger releases, or updates of older games for current platforms. With The War of the Worlds, though, they basically made some phone calls and said “we want to make this game.”

HG Wells’ novel The War of The Worlds was first published in 1898, and has seen a number of adaptations, including the 2005 Spielberg film where Dakota Fanning is annoying, and Orson Welles’ notorious 1938 radio drama. The videogame, however, is based on the original novel with some inspiration drawn from the 1953 movie. If, for some reason, you’re unfamiliar with the plot, it’s pretty straightforward: Martians land on earth and start killing people. 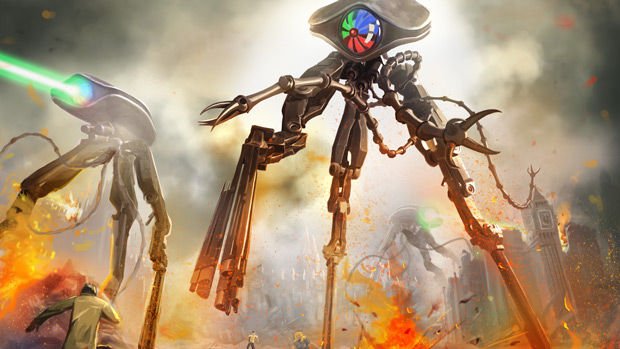 Official concept art of the Martian tripod from the game.

In the game, players control the hero — whose name is still a secret — as he makes his way through London during the alien invasion.

Technically speaking, the game is a two-dimensional side scroller that focuses on puzzle-solving and evasion instead of shooting guns or swinging swords. The controls aren’t final yet, but the build I played had a very simple two-button configuration. One button was jump, and another was the climb button. The climb button could also be held down while moving to run. The part of the game I played involved a bit of crawling into pipes.

I feel like an idiot trying to describe the control setup, because it’s pretty old school. Visually, on the other hand, The War of the Worlds is a delightful punch in the face. As I mentioned, this game is a throwback to old rotoscoped titles like Flashback. For those unfamiliar with the term, rotoscoping is the act of animating over live action video, frame by frame. It’s sort of a precursor to motion capture.

The rotoscoping effect by itself gives the The War of The Worlds a unique appearance, since the technique doesn’t get used much nowadays. Unlike the old Genesis-era rotoscope titles, this game is gritty and dark. It’s got touches of color, but for the most part, the palette is muted. Mud and shadows are inherently dark and gritty, but the use of color in this game seems to imply sepia-tone film more than war-torn London. Of course, the Martians are all chrome and floodlights, and they add a lot of color. I’ll get back to that. 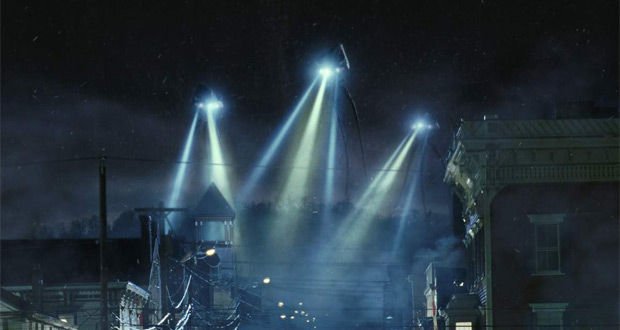 The game’s logo, which I saw on the loading screen, is very distinct. It simply says The War of The Worlds in handwritten cursive, very similar to the 1953 movie poster. Stylistically, I haven’t seen a lot of handwritten in game logos. This might seem like a stupid observation, but it very much sets a tone for the rest of the game’s design.

I got to play part of the third level, which takes place in Hyde Park. The area has been turned into a makeshift base for the [human] military and by the time the hero reaches the area, it’s been mostly destroyed. Mud, smoldering craters, and overturned tanks are all over. There are NPCs running around, behaving as panicked as humans would during an alien invasion. In the distant background, tanks and Martian tripod walkers are in the middle of battle. At one point, a tank passes in the foreground. In spite of the overwhelming sense of scale and chaos, the game mechanic here is strictly two-dimensional.

Both in gameplay and aesthetic, The War of The Worlds is reminiscent of Limbo. The controls remind me a bit of Prince of Persia Classic on XBLA, but with less jumpin’ around like a dang spider-monkey. The color scheme is something else entirely, somewhere between Limbo and Fallout 3. 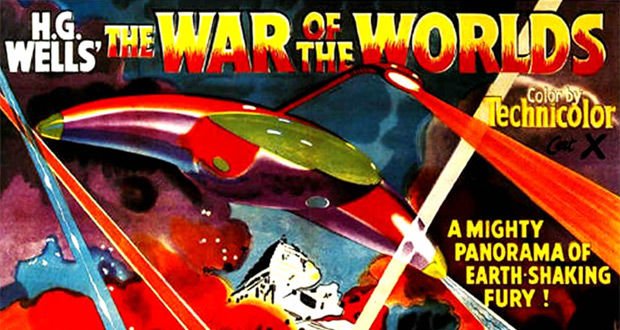 The game is considerably less colorful than the 1953 movie’s poster.

Throughout the Hyde Park level, alien drones fly around terrorizing humans. They follow the hero with bright white floodlights, and if he’s not quick enough to evade, the beams focus into a ray that turns him into a charred, flaming skeleton.

Most of the game looks somewhere between old gritty war footage and a current-gen videogame, but the alien death rays and the accompanying flaming skeleton look as though they were pulled from an old science fiction movie. Coupled with the game’s mostly realistic look, this effect could easily be hideous and inappropriate, but it totally works here.

The build I played didn’t have any audio, but I’m told The War of The Worlds has a script written by someone reputable, a score composed by a very talented somebody, and that it’s narrated by a recognizable Hollywood actor. I’m sworn to secrecy beyond that, but I will say this much about the narrator: we are in for a treat. You’re probably gonna get the fanboy gigglesweats over this one. 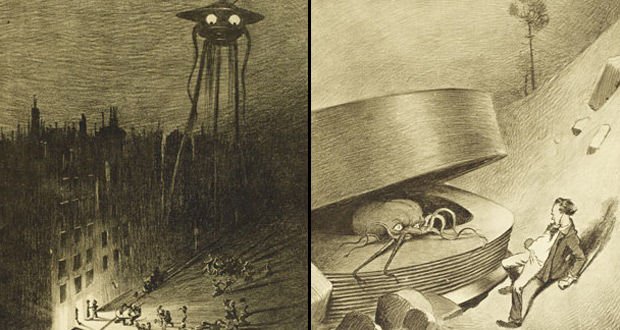 I have absolutely no idea what is going on here.

When he was telling me about Other Ocean’s foundation and history, Mike really stressed how much this was a game that he and his colleagues wanted to make, and that’s the main reason I have a lot of faith in it. The War of The Worlds was hand-picked from a pile of subject matter that a bunch of guys thought would make for a cool video game, and the gameplay isn’t trying to compete with what another studio is doing.

Most of the outside talent that’s gotten involved with the game has done so because it sounded cool, not because of the paycheck, and that’s usually a good sign. I don’t think anyone will argue with me when I say that the best popular media (games, movies, comics, music) is the kind that’s created out of passion, and not for the sake of creating a product.

A week ago, The War of The Worlds wasn’t even on my radar… I didn’t know it even existed. But after what I got to see, it’s planted firmly on my “want” list.