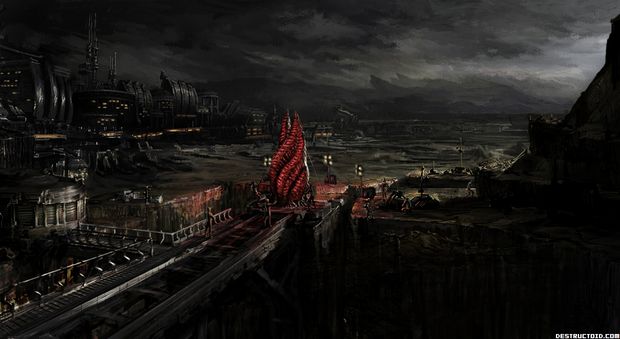 [John “JC” Calhoun is the Senior Designer in charge of story on a little Wii-exclusive hitting shelves later this year, Dead Space: Extraction. Maybe you’ve heard of it? We’ve got an exclusive little sneak peak at what will be his first blog entry on the official Dead Space: Extraction Web site, which is set to go live next week. Enjoy. – Nick]

Hello! My name is JC, and I’m the story designer on Dead Space: Extraction. If you haven’t heard, Extraction is the official “first chapter” in the Dead Space universe. A prequel — easy, right?

Actually, if history has taught us one thing, it’s that prequels can be extraordinarily difficult.  You need to have a compelling story for franchise fans, but not alienate new players.  And with Dead Space, this challenge is threefold, because there’s already so much material to draw from.  Not only is there the award-winning game, there’s also the graphic novel and animated feature to work with.

So where to begin?

kicks off moments before the mysterious Red Marker is extracted from the far-flung colony of Aegis VII. Fans will know what happens next, and I don’t think I’m spoiling anything when I say it’s bloody and disturbing. This is a key moment in the graphic novel, and it’s where Extraction first intersects the franchise. A good analogy would be that if the graphic novel runs east-west, then Extraction runs north-south — and the Marker’s extraction is the point where they intersect.

From there, our heroes spend a few chapters escaping the colony. Their salvation is the planet-cracker Ishimura, which they reach via shuttle. Once on-board, our heroes have an adventure that runs parallel to the events seen in the animated feature. You’ll see some familiar faces, and uncover the truth behind some of the secrets hinted at in the movie.

I can’t reveal what happens next. (OK, I’ll reveal a little: body parts fly everywhere…) But I can tell you that the final scenes of Extraction intersect a critical moment in the original Dead Space game. Hmmm… what moment could this be?

Finally, Extraction is coming to you from the same great team that brought you the first game. The designers and artists, and even the writer and some voice-actors, are involved on this project! The platform may be different, but be assured: Extraction is authentic Dead Space, through and through.

I’ve briefly hinted at Extraction’s heroes, and I’ll cover each one in detail in later blog posts. Thanks for reading!