Yesterday, I posted about the firing of an Age of Conan GM for cybersex with a player. As you may recall, the player invited a sexual encounter with a Funcom employee following an assistance request. After a bit of humorous banter using in-game terms in a suggestive manner, the GM started to really take things up a notch with downright graphic depictions of sex acts. Then, like that awkward moment when your mother walks into the room at just the wrong time, the player announced they were male.

It was a prank as hilarious as it was shocking. Who could imagine that a GM for what is said to be the second most popular subscriber-based MMO, someone who should have to have enough experience with the internet to know better, would wind up in so obvious a trap? Funcom responded quickly by firing the GM and issuing a statement of their commitment to customer service practices that do not involve employees getting their freak on.

Late last night, Destructoid was contacted by someone claiming to be the instigator of this little fiasco. He’s known on Age of Conan as “Fastolf” and he promised us more insight into what went on as well as his complete set of unaltered screenshots from the event. Skeptical? So was I, until he provided both the goods and the above image of his character admitting to relations with a certain robot. Scandalous!

Hit the jump to read more about this lascivious tale of misplaced passions, misplaced pants and sock-sniffing fetishes. Please note that while the text in this post contains no offensive content (outside of our norm), the images in the gallery contain text that is completely uncensored and possibly NSFW. 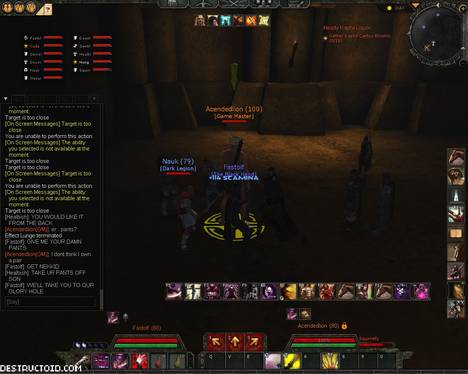 According to Fastolf, it all started with a valid request to fix a glitched raid. “Our raid boss (the honorguard in Kyllikkis Crypt) didn’t respawn and I sent a petition to have [a GM] reset it. We waited the full week, so there was some sort of problem.” Even at this early stage, however, Fastolf was already beginning to get the impression that he had a live one on his hands. “While he was there, I joked around and told him to take off his pants. And of course, he did.”

The GM did his job and reset the raid. So, why wasn’t this the end of the story? “Well, it was 3am, there’s no PvP in the game, and we couldn’t do any more PvE. So at first I was thinking, ‘Hey, why not just joke around with a GM while I still have [him] since most petitions take 9 hours to be answered?’ It wasn’t really until he began getting into the conversation (and getting his e-hardon) that I really began setting him up.

“At first I said a few of the in-game moves in a sexual way, and he took it to the next level,” he explains. “After that, I wanted to see how far it could go and ultimately answer the burning question I’ve always had while playing AoC: ‘Why does it take GMs 9-12 hours to answer petitions?'” 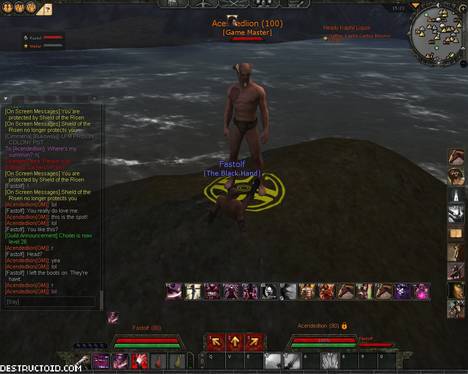 As we know, it went fairly far. The GM left Fastolf behind, promising to, “summon [him] to take care of [his] petition.” If you’re missing the subtext here, by “petition,” he means “imaginary vagina.” Sure enough, the GM had found an appropriate place for a little private time, warped Fastolf to the location and the conversation became increasingly crude.

Once satisfied with the lengths that the GM was willing to go to in describing their sexual fantasy, Fastolf decided that it was time to let the cat out of the bag. As the screens show, the GM was engaged enough with writing his description that he failed at first to notice the revelation that Fastolf was actually male. Even after being explicitly told, he continued to disbelieve that he’d been had. “[He] still insisted I was a woman because I used the word ‘hun’.”

To further demonstrate his incompetence, the GM later returned to a comment from earlier in the encounter that could have had serious consequences for another player. “He asked me if Hong, a player I joked around stating he was a gold farmer, was actually a gold farmer. I assured him Hong was not a gold farmer, and he said something along the lines of ‘good i was about to permaban him lol’. Apparently, the whole ‘I’ve been f*cking with you the entire time,’ and the fact Hong is in my guild just didn’t get through to him.” 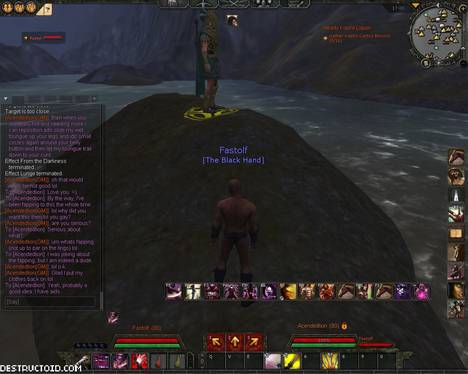 The fun didn’t stop just because the coitus ended. No, there was some time for snugglin’ yet. Either out of fear for his now tenuous position or being big enough to admit when he’s been duped, the GM complimented our hero for his success. He even goes so far as to suggest that he should seek work as a GM also, citing in a most delicious irony that, “the perks are great.”

Since he obviously had the upper hand, Fastolf decided to take advantage of the situation for some quick cash. “I told him at a later time I’d post these screenshots unless he gave me 100 in-game gold. Of course, within 24 hours, it was there.” It’s the one part of the exchange that Fastolf seems to have regrets about. Oh, not the extortion, but that he neglected to document it. “I truly wish I had taken a screenshot of that bit,” he laments.

As for how the screenshots wound up on mmorpg.com the other day, Fastolf claims he’s innocent. “I sent some of the conversation to friends and they leaked it out.” His pals really only beat him to the punch, though. Despite the blackmail payment from the GM, Fastolf says, “I was going to post the evidence regardless of whether those screenshots were leaked.” 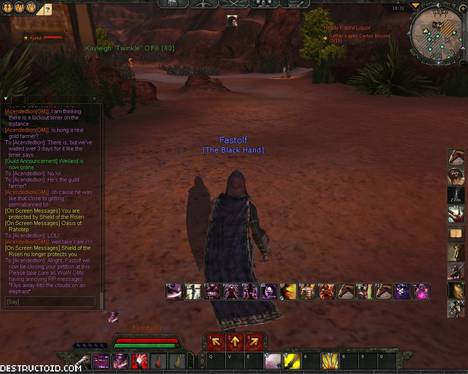 But now the story is out and the Funcom employee with whom he shared such sweet, tender moments is gone. “I’m mostly worried about him hunting me down and killing me,” comments Fastolf. “Aside from that though, I thought it was hilarious he was fired. I know if I pulled that crap on the job I’d expect to be fired too. Then again, I’m not that dense to cyber with random customers.”

And what does the future hold for Fastolf? “I do not plan on continuing with AoC,” he says. Indeed, it seems that the prankster has a bigger fish to fry. “I play my toon Fastolf on Andorhal in WoW nowadays anyways where I still try to ‘RP’ with GMs on there.” Hard as it is to imagine someone managing to get away with such a thing twice, let alone with a company with Blizzard’s reputation, there’s still always that chance someone will be foolish enough to let us see Fastolf again.

Is it a scathing indictment of the practices used by Age of Conan GM employees? Not really. One isolated incident should not be enough to condemn the entirety of the online support. Nevertheless, poor response time, inappropriate conduct and manipulation of game resources for personal gain are concerns that I sincerely hope Funcom is addressing within the ranks after this event, as it’s obvious that at least one person didn’t get the proper training.

I’d like to thank Fastolf for taking the time to talk to me about this and for providing a story that is equal parts amusing and terrifying. I’ll leave you with one final quote from the man who killed a GM, the last thing he said in our interview:

“Oh, just for a last confirmation. You sure you won’t take off your pants for me?”

You know, I’m actually considering it, but I hear you have the AIDS.