I recently went on a tear about how I’d like for more women in video games to throw off the shackles of gender concepts in favor of just being as interesting and genuine as possible. The female protagonists from WayForward are a perfect example of what I mean. Their female leads sometimes cute, sometimes beautiful, but always distinctly feminine, but without being defined solely by their gender.

Their next game, Mighty Milky Way is no different. It’s planet hopping, gravity-based puzzle platformer about a little green alien girl who exudes confidence, charm, sex appeal, but most importantly, she clearly does things her own way. She hangs out with a T-Rex, beats up said T-Rex, and isn’t afraid to spin some records after the fight.

Speaking of that T-Rex, the “pre-production artwork” you see above is evidence of how that character was designed. The little check mark on the right says it all. WayForward is the studio that’s willing to give a hastily drawn picture of a cyborg dinosaur scribbled onto some lined paper the green light for an appearance in an up and coming videogame. That’s my idea of a studio who knows how to have fun with the process of game development.

Read on for a better look at the intentions, concepts, ideas, and awesome doodles that went into the creation of Mighty Milky Way, courtesy of WayForward’s Sean Velasco. 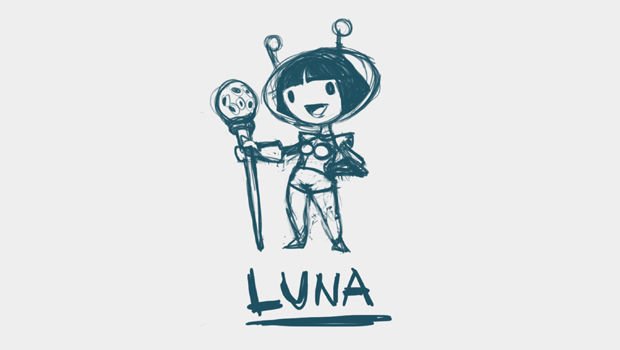 Dtoid: What are you hoping players experience when they play Mighty Milky Way?

SV: We want players to scratch their brains over devious puzzles. We want them to grit
their teeth as they skim past the surface of a dangerous planet. We want them to shed
a single tear when they hear the choirs singing “T-Rex!”. Above all, they should scratch
their heads at the nonsense, and then smile as they embrace it!

Dtoid: How did you come up with the characters for Might Milky Way, particularly Luna. Any
Olimar influence in there? Jetsons maybe?

SV: The only thing those characters have in common are bubble helmets! I’m surprised
you didn’t throw “The Fury” from Metal Gear Solid 3 in there too. We basically just
wanted to make a cute little space girl that had a sort of 50’s retro chic, and Luna was
the result! As you can see in my admittedly crude concept art, she was originally way
more retro. Naturally, that got massaged out as we made the game mightier.
The T-Rex was drawn on a legal pad while we were at Jack in the Box. Not
Joking. 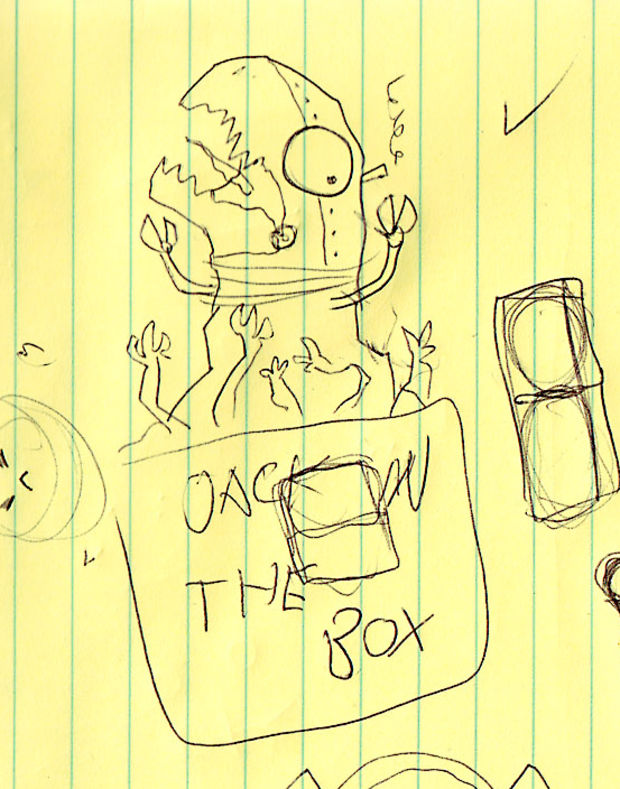 Dtoid: By my count, Luna is the third original WayForward heroine to star in her own game.
That’s more than a lot of bigger, older developers have done in their lifetime. Is there a
reason why WayForward is so fond of female protagonists?

SV: We’ve actually had several of them over the years in addition to the ones you see
on DSiWare. Our creative director, Matt Bozon, is fond of female leads, especially
ones that are strong characters in addition to just looking pretty. The other directors
and I wholeheartedly agree with this concept, and it’s become one of our core tenets.
WayForward fights the misogyny!

Dtoid: WayForward also has a knack for designing female characters that aren’t overly
sexualized or objectified. Do you have general rules around the way that you design
your female protagonists?

SV: We like our characters to be attractive and appealing. But, it’s important to let the
personality dictate the look. It’s easy to make a sexy-looking design, but not necessarily
an attractive character. Discerning audiences can tell the difference, and it’s easy to
turn people off. Milky Way’s lead gal “Luna” is a character I’d be proud to show my
mom! Side note: whenever I’m working on something bloody or violent, she always
says “Why can’t you make another sweet game like a boy and his blob? That game was
so nice…”

Dtoid: Back to Mighty Milky Way, what lessons did you learn from designing Mighty Flip
Champs, and how did you apply those lessons to designing your new “Mighty” game?

SV: The Bozon Bros. designed Mighty Flip Champs, whereas I helmed Mighty Milky
Way. The team makeup and structure was totally different on both projects. However,
the Milky Way team looked hard at the unique aspects of Mighty Flip Champs and
valiantly endeavored to bring them to our game. The two Mighty games are very
different, with distinct personalities, but we think that’s what’s great! Hopefully we can
do another Mighty game with a different team, and it would be a third pillar of quirk!

Dtoid: Is there a specific reason for the reoccurring “Mighty” prefix?

SV: We wanted to tie the games together so that they would stand out among other
game titles. Ideally, we could make a bunch of Mighty games; games that have the
same reoccurring elements. Players would go in knowing sort of what to expect, and we
could build a library of unique games under the same moniker! Think the Bit.Trip games
and Pixeljunk series and you aren’t too far off.

Dtoid: Is there any potential for a retail release of your DSiWare games? Sadly, there are a
lot of people who don’t have their DSi’s online, and I feel like they’re missing out.

SV: While we love the DSiWare platform, we are always looking at different ways to get
our games to the players. I wouldn’t be surprised to see some of WayForward’s original
titles coming to other platforms in the near future…

Dtoid: Any potential to bring your games to other download services or consoles?

SV: Absolutely! I can’t talk about it right now, but you will hear more about our diabolical
plans very soon!

SV: The music in this game is truly amazing! However, I am going to have to call out
Luna and the T-Rex’s relationship as my favorite part of the game. Their dynamic is just
so complicated, realistic, and exciting. Once you play the game, you will understand. Or
maybe you won’t! That’s the beauty and mystery of Might Milky Way.