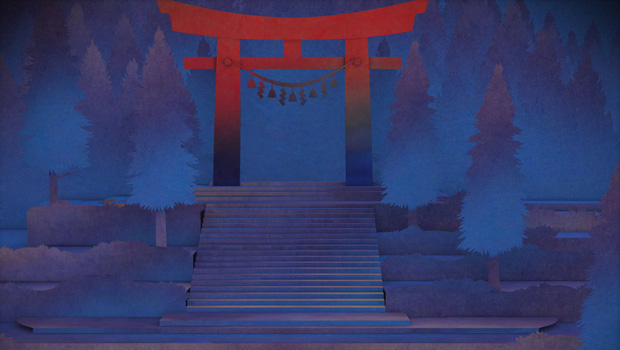 The papercraft adventure arrives on iOS this summer, eShop in 2014

If you enjoy atmospheric adventure games like Superbrothers: Sword & Sworcery EP and love paper cutout art styles, Tengami ought to be on your radar. Indie studio Nyamyam was originally targeting an iPad release in Summer 2013, with Windows and Mac ports later down the road. In an exclusive interview with Nintendo Life, the team has announced that a Wii U version is coming too, set to drop in the eShop in 2014.

The most exciting part about this news is the pedigree of the dev staff, which consists almost entirely of Rare alumni, both pre- and post-Microsoft acquisition. We’ve got Jennifer Schneidereit, who was only briefly with Rare to work on Kinect Sports; Phil Tossell, a 14-year vet with Diddy Kong Racing, Star Fox Adventures, and Kameo: Elements of Power under his belt; Ryo Agarie, artist for Perfect Dark Zero and Viva Piñata; and David Wise, legendary composer responsible for the tunes of Battletoads, Donkey Kong Country, and more.

“I have fond and nostalgic memories of the years I spent working on Nintendo consoles at Rare.” Tossell explains. “I never imagined I would have the opportunity to work with Nintendo again so soon after starting Nyamyam. It’s very exciting.” This isn’t the first time that an ex-Rare member waxed nostalgic about his time with Nintendo — Banjo-Kazooie composer Grant Kirkhope recently expressed a strong desire to work with the Big N again. Maybe all these people should form a new company called “Uncommon” and become a dedicated Nintendo second party!