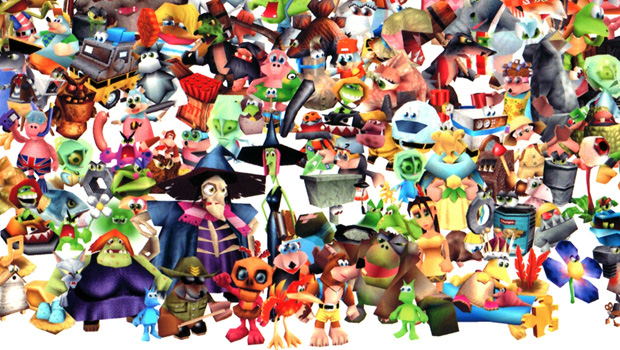 Grant Kirkhope lays it all out on Game Grumps

I was away on a self-imposed hiatus this past week, thus I missed out on sharing this recently released Game Grumps guest starring Grant Kirkhope, composer for Banjo-Kazooie, Donkey Kong 64, Kingdoms of Amalur: Reckoning, the upcoming Yaiba: Ninja Gaiden Z, and many others. If you haven’t watched the special one-hour, I advise you to make some time. Kirkhope is the prototypical crude, manic British man, and he’s absolutely hilarious.

Towards the end of the video — starting around the 57:43 mark — JonTron asks Kirkhope about how Banjo-Kazooie: Nuts & Bolts ever became a thing. In addition to his disappointment with the direction of the Xbox 360 racing-platformer mishmash, Kirkhope also expressed a desire to “get the band back together” and make a true Banjo-Kazooie 3.

“I keep wishing that all the ex-Rare staffers would just get together and form a company, and go to Nintendo and say, ‘Give us the money. We’ll make you Banjo 3 for the Wii U,’ or whatever,” Kirkhope said. “Just make Banjo 3 like it should have been made back then and it would be great, and it would be great on Wii U, and all the ex-Rare guys would be together again all happy and kissing each other.”

Obviously, it’s highly unlikely that Microsoft would relinquish the rights to the Banjo franchise, but there’s nothing stopping Grant and the boys from making a spiritual sequel. This is reaffirmation of an initiative that Kirkhope and former Rare artist Steven Hurst kicked off last year, in which the two went on Twitter to gauge interest in such a project.

Kirkhope suggested that the reformed team present the idea to Nintendo, which I understand to mean that he values the synergy Rare and Nintendo shared back when they were the best of bunk buddies. Rare was given a chance to shine during its partnership with Nintendo, and since its acquisition by Microsoft, many have noted that the studio’s output is not quite the same. Would the remnants of the old crew be able to recapture that same magic? Grant hopes so.

This needs to happen. Seriously. You’ve been leading us along for months, Grant. Let’s do it to it!