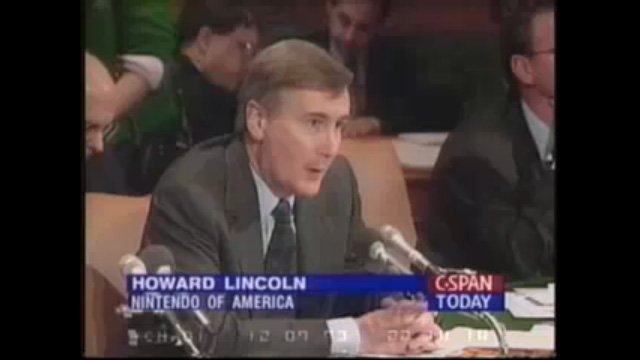 Nintendo of America used to be cutthroat and vengeful

The Nintendo of today is known for being quiet and humble, making conservative decisions, and doing its best not to intentionally piss potential third-party partners off. Most of the complaints directed at Nintendo’s current state can partially be attributed to this behavior — which isn’t to say that it didn’t work for the Wii and DS. This wasn’t always the case, though. There was a time when Nintendo of America was the biggest, baddest shark of them all, and software developers and retailers were genuinely afraid of the House of Mario.

One of the key figures in establishing Nintendo as a Western powerhouse was Howard Lincoln, the lawyer turned Nintendo executive who was recently the focus of a lovely feature by Not Enough Shaders’ Emily Rogers. He defended Nintendo against Universal’s “Donkey Kong” lawsuit, became senior vice president of NoA in 1983, then served as chairman from 1994 until his departure in 2000. In his nearly two-decade tenure, he was responsible for some of the most influential decisions in Nintendo’s third-party relationship history.

From bringing on both Rareware and Retro Studios as second parties to defending Nintendo during the videogame violence Senate hearings in the early 90s, Lincoln wasn’t afraid to take risks. He also wasn’t afraid to speak his mind — some of his words regarding the competition were so brutal that you can still feel the scorch marks years later. Could his actions be part of the reason many third parties became wary of working with Nintendo later on? Possibly, but you can’t deny that the man got results.

If you’ve ever read David Sheff’s Game Over, you would already be familiar with some of Lincoln’s earliest success stories. One such tale was how Lincoln got revenge against Tengen and Atari Games for their unlicensed version of Tetris on the NES. Tengen had originally sued Nintendo for refusing to allow Tetris on home consoles. Lincoln noticed a loophole in Tengen’s licensing terms with Tetris property holder Mirrorsoft, which he exploited in order to “steal” the rights to publish Tetris on consoles and handhelds, thereby forcing Tengen to recall all copies of its version already on shelves.

Lincoln’s thoughts on the situation? “We knew we had those bastards by the balls. We knew we were going to make a fortune on this product and they, in turn, were going to get kicked in the head.”

During the videogame violence Senate hearings — sparked in part by the 1992’s Mortal Kombat and resulting in the formation of the Entertainment Software Rating Board — Lincoln took the opportunity to deflect focus away from Nintendo and onto SEGA and retailers that stocked SEGA product. In the above video clip, he held up the infamous SEGA CD title Night Trap as an example of an adult game directly sold to youths. SEGA was furious that Lincoln would be so petty and self-serving during a period when the entire industry needed to band together.

Lincoln was not bothered, and he even wrote a poem directed towards then-SEGA president Tom Kalinske: “Dear Tom, Roses are red, violets are blue, so you had a bad day, boo hoo hoo hoo. All my best, Howard.”

When not getting on people’s bad side, Lincoln was strengthening relationships with other third parties. He saw great potential in certain teams to provide the kind of Western software that Nintendo couldn’t develop on its own, which led to partnerships with Rareware, Retro Studios, Silicon Nights, LucasArts, and DMA Design (now known as Rockstar North). He even convinced Electronic Arts to publish sports games on the N64. In case you’ve forgotten, EA had long been nervously opposed to developing on Nintendo hardware; in fact, EA sports titles were one of the big bullet points the Genesis initially had over the SNES.

Lincoln would step down as chairman in 2000, and most of the other major players of Nintendo’s “old guard” — first NoA president Minoru Arakawa, executive VP Peter Main, and global Nintendo president Hiroshi Yamauchi — departed by 2002. Many of Lincoln and old-school NoA’s accomplishments have since dissolved, resulting in the different we see Nintendo today.

Ms. Rogers strongly implies that the current management is to blame for all those partnerships going the wayside, but I personally think Nintendo was forced to change. It’s a shame that Nintendo lost excellent talent, but you have to remember that the company wasn’t exactly firing on all cylinders at the start of the century. That was a different age, and Nintendo couldn’t be the rampaging bull it once was in this new generation.

Nonetheless, we could use another guy like Howard Lincoln at the helm, someone who actively courts Western studios in a bid to expand Nintendo’s library and actually succeed. Especially in the wake on publishers’ continued refusal to bring any of their upcoming software to the Wii U, a little of the 80s shark mentality couldn’t hurt.

Howard Lincoln: Kicking Ass Before Reggie Came Along [Not Enough Shaders via NeoGAF]