You can scramble eggs, too!

“Hopefully, nobody has any questions about Hunt,” Turtle Rock co-founder Chris Ashton said, his eyes darting around a cloistered room flush with press. “We’ve been talking about that forever!”

Over the past several months, the humble, long-bearded design director has ceaselessly detailed this one fragment of the experience, holding his tongue about just about every other facet of the asymmetric game of pursuit. In that moment you could see it on his face, a shy glimmer of excitement to, at long last, reveal something new. 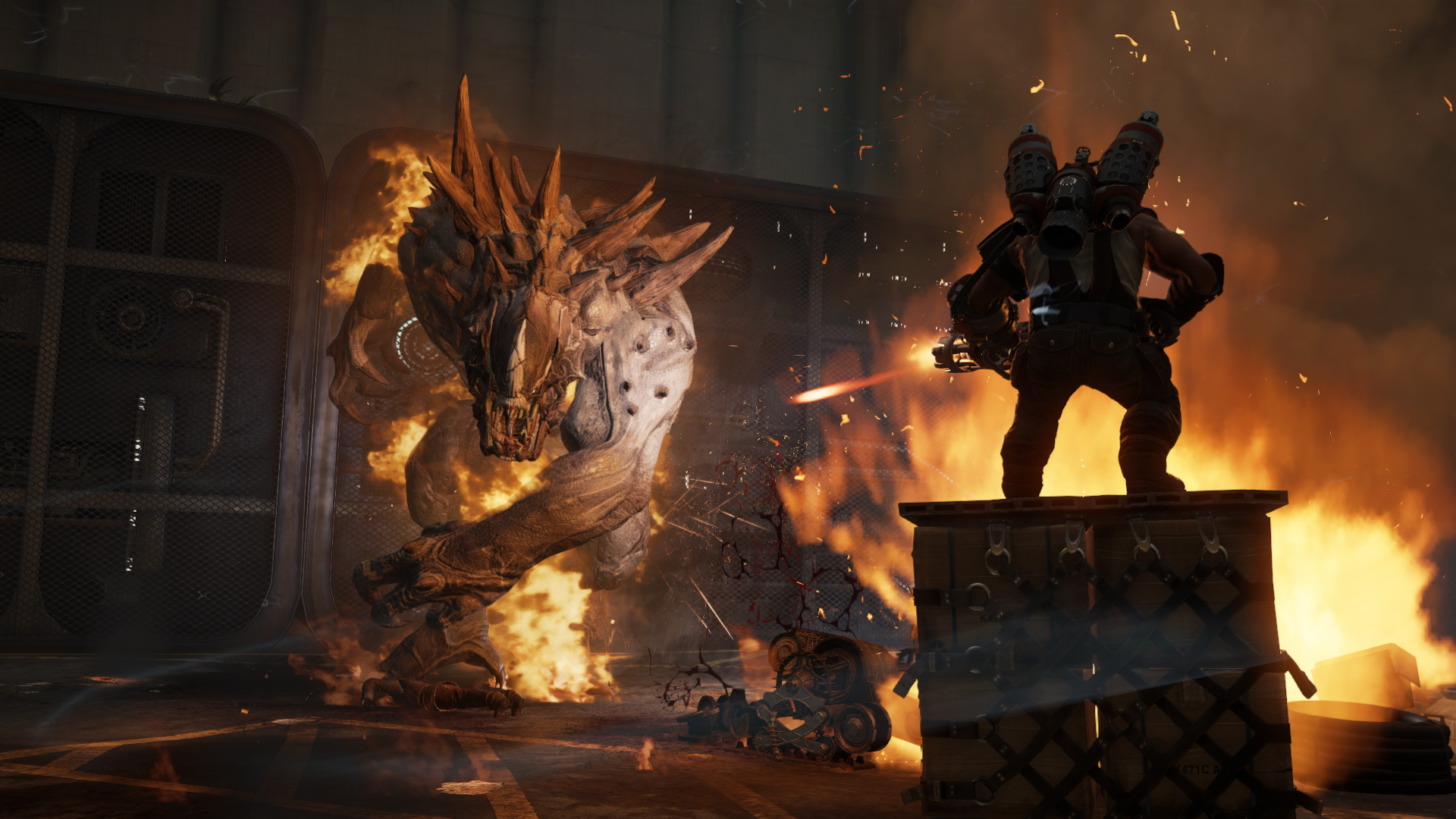 Ashton, along with his partner in crime, creative director Phil Robb, provided us with the rundown on Hunt anyway. Evolve follows a team of four hunters who endeavor to take down a colossal alien monster. Though, as we soon learned, that’s not always the primary objective.

Turtle Rock revealed three new game types: Nest, Rescue, and Defend. Nest was by far my favorite of the bunch, as hunters attempt to eliminate a handful of monster eggs before they can hatch unto the world and terrorize its colonists. Of course, the alpha monster will have some say in the matter, doing its damnedest to save the young.

Part of that effort may involve hatching one of the eggs prematurely, allowing the alpha to double team the humans alongside a stunted Goliath. It’s a delicate balance of risk and reward, enlisting the help of an infant demon, simultaneously increasing your firepower whilst also bringing the enemy one step closer to their goal. 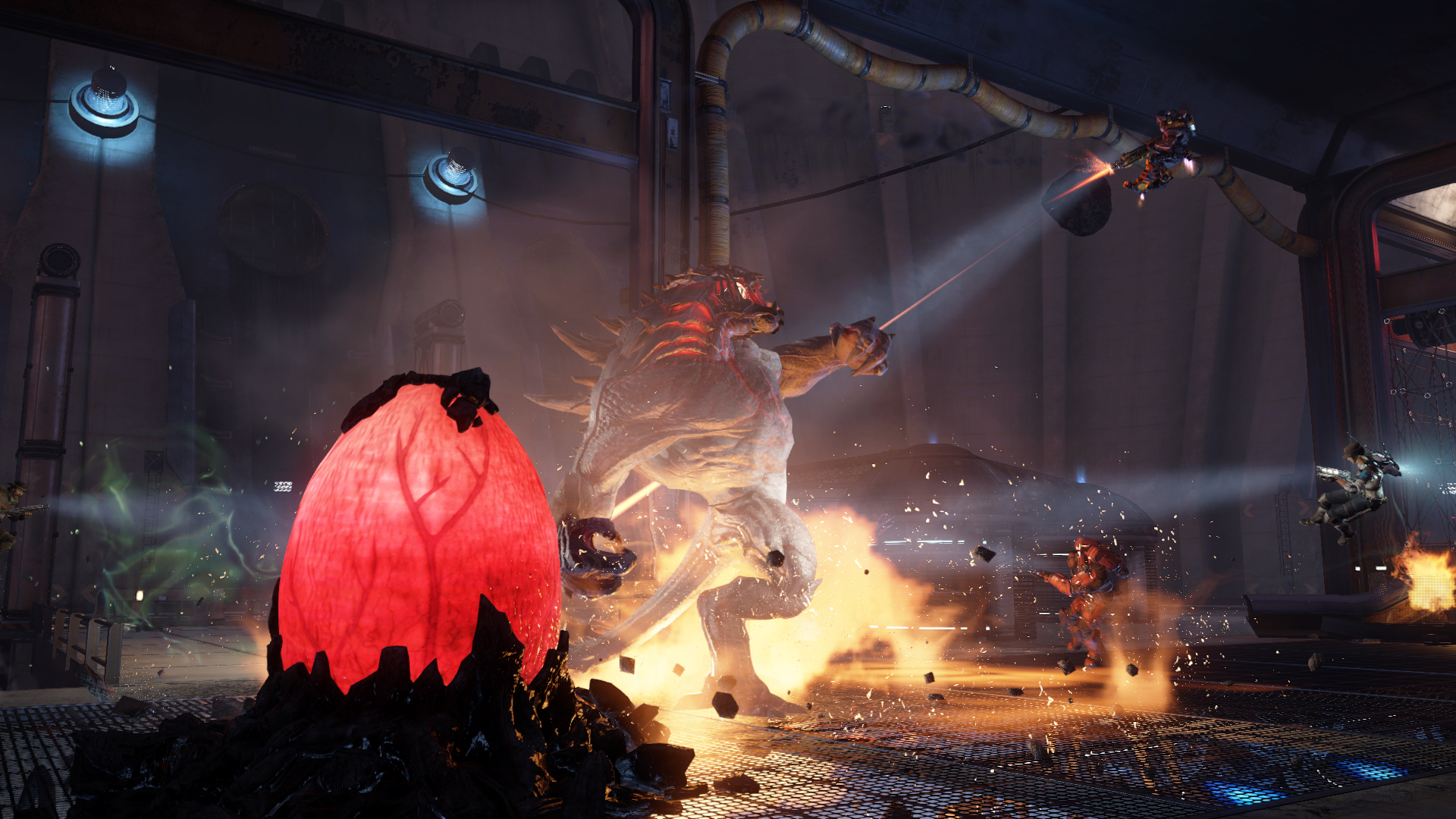 The mode also lends itself to new tactical possibilities for the hunters. Typically, it’s in your best interest to stick together, as a single human is no match for the monster. But the monster also can’t be in several places at once, and the hunters always have the option of splitting up and taking out multiple eggs in concert. I have one word of advice for players keen on employing this strategy, though. Make sure to keep an eye on your surroundings. It really sucks getting gobbled up by a carnivorous plant and have no one around to help.

Rescue mode turns the tables on the human team, giving them something to protect. After a group of colonists is attacked and flees into the wilderness, it’s up to the hunters to locate, revive and lead the survivors to rescue shuttles. Meanwhile, the hulking monster is trying finish the job. This can lead to some pretty tense moments, trying to target these civilians while four well-armed soldiers harass you from afar, as well as flashes of frustration. Nothing is quite so disheartening as coming up short because one of these goons gets hung up on a piece of scenery.

The final mission type we saw, Defend, is something of a retrenched horde mode. There’s a massive spaceship looming overhead. It’s loaded with civilians, refueling, and preparing to escape. There’s one problem, though. Small waves of Goliath minions led by a stage three alpha are headed its way, aiming to take out the generators and make the whole thing explode. It’s a spectacle and makes for an intense showdown. 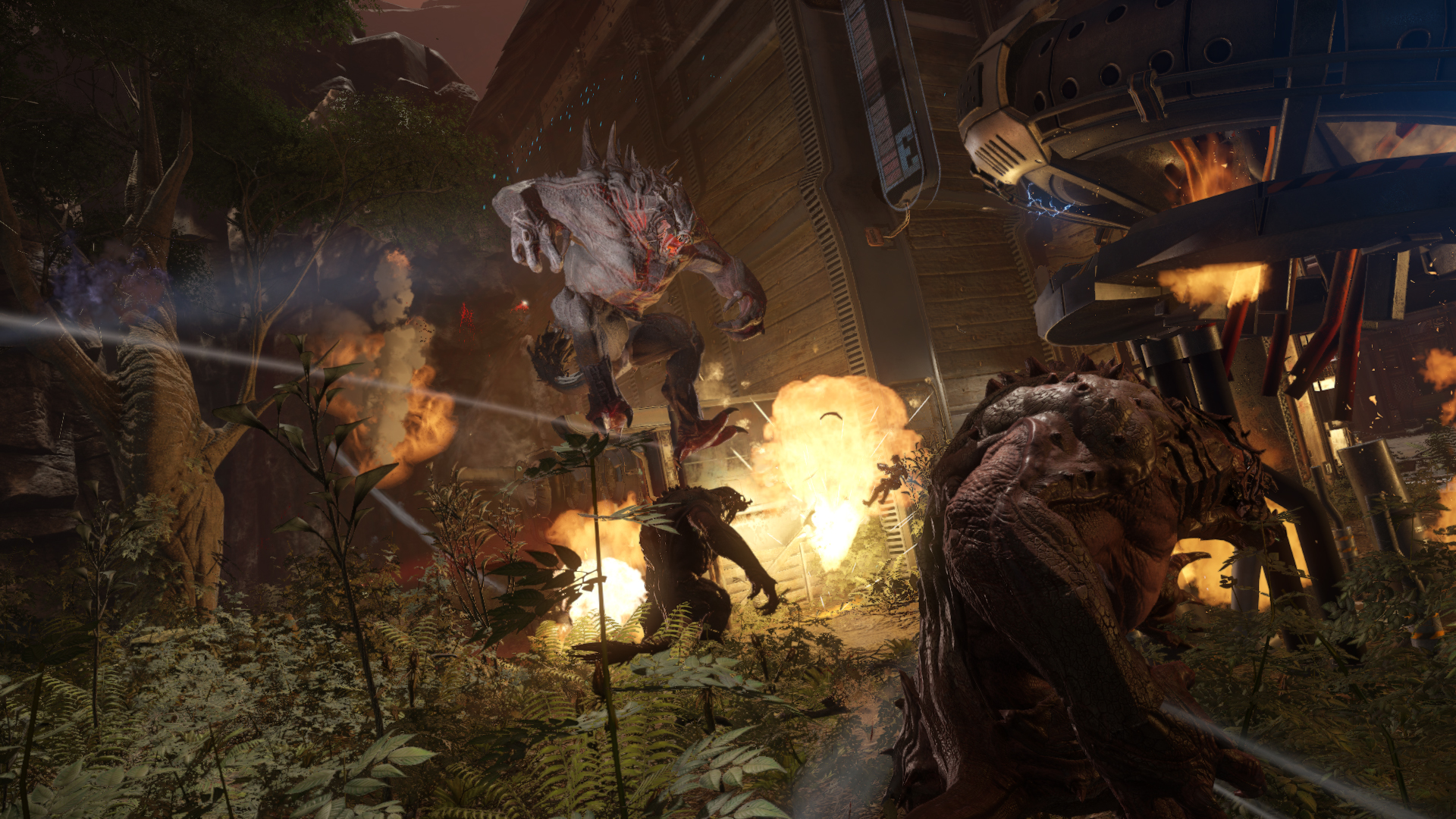 While each of these modes can be played individually, Turtle Rock showed us the game’s full array of content via Evacuation, essentially Evolve‘s take on a campaign. Five players at a time huddled into small, sauna-like rooms, each stuffed to the gills with high-end PC equipment to get our hands on the game.

Though there is a narrative woven throughout Evacuation, it’s sparse. Taking place on the overrun planet of Shear, colonists have five days to fend off the monsters and get out of dodge. Each day is a mission, the outcome of which impacts the next. Say the monster sabotages a dam, for example. The following stage will be flooded with water full of man-eating eels. Robb told me about another scenario where the hunters win and release “a shit ton of birds” into the atmosphere, making it hard for the monster to maneuver without tipping off folks to its location.

It always culminates in a Defend mission, but the journey to that point has the potential to be different. Apparently there are over 800,000 possible combinations of mission types, maps, and environmental effects. Pair that with an expansive roster of twelve characters, each of which with their own unique skills and abilities, and it feels like I’ve barely scratched the surface — even after spending several hours with the game. 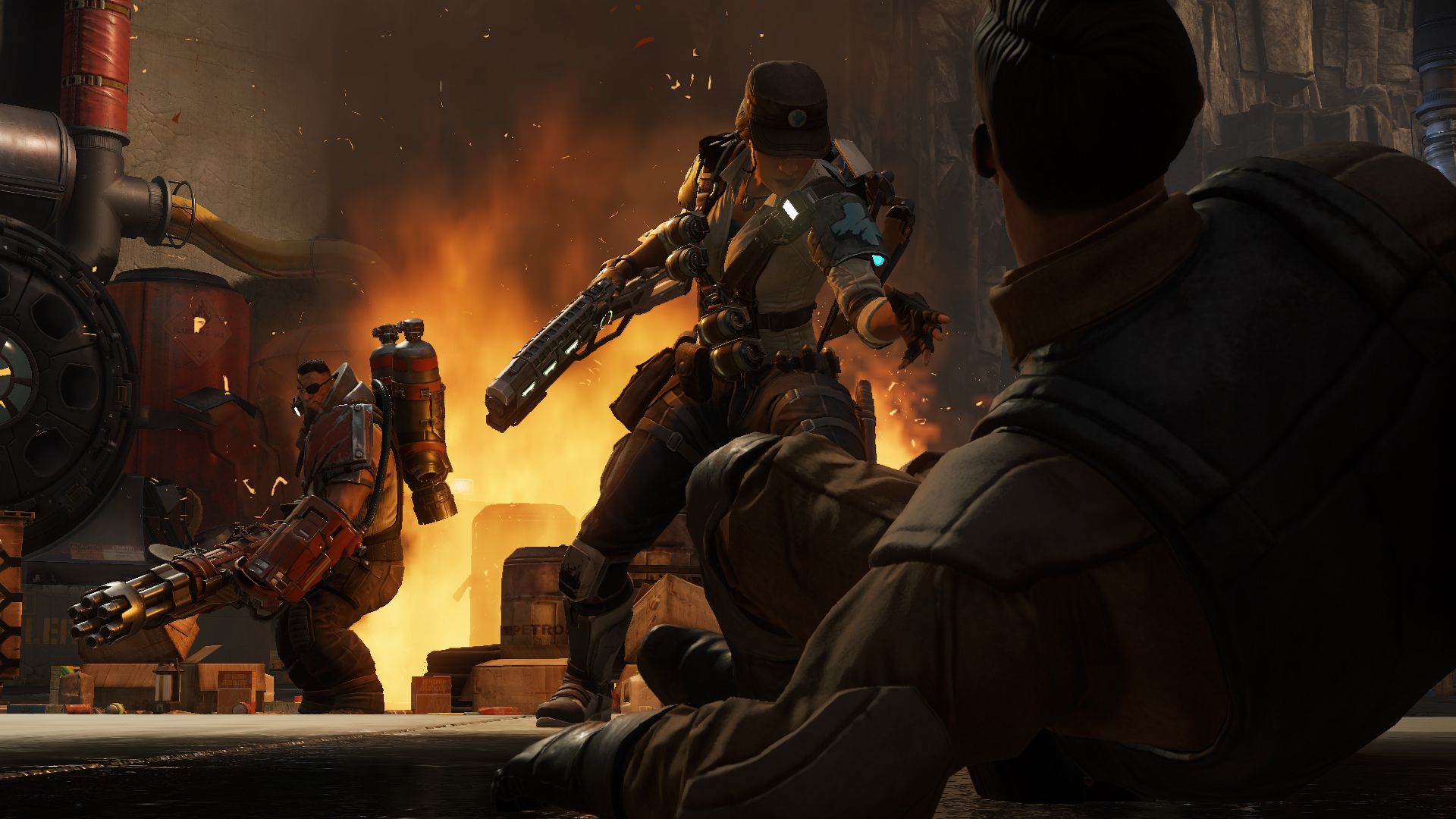 It was difficult to walk away from Turtle Rock Studios and Evolve without positive impressions. The game certainly seems to have a lot of potential, and I can safely say I’m looking forward to its February 10, 2015 release on Xbox One, PlayStation 4, and PC.

Should you wish to get a taste of Evacuation mode before then, be sure to check out the open beta, which is coming exclusively to Xbox One in January.