The push and pull of good intentions and capitalism

Evolve was peddling pre-order bonuses before its publisher had even shown off what the game looked like. A year later, we have a better idea what type of experience Evolve will offer when it releases next month. However, concerns regarding its business strategy linger.

Months ago, Turtle Rock Studios co-founder Chris Ashton made headlines when discussing the developer’s plans for DLC. He stated the game was built “from the ground up” for add-on content, something he claimed Evolve would support “more so than any game ever before.”

I broached the snafu with creative director Phil Robb during a studio visit late last year, a conversation that once again seems relevant in light of recent announcements surrounding the game’s mystifying DLC plan and the negative reaction it has elicited from fans. 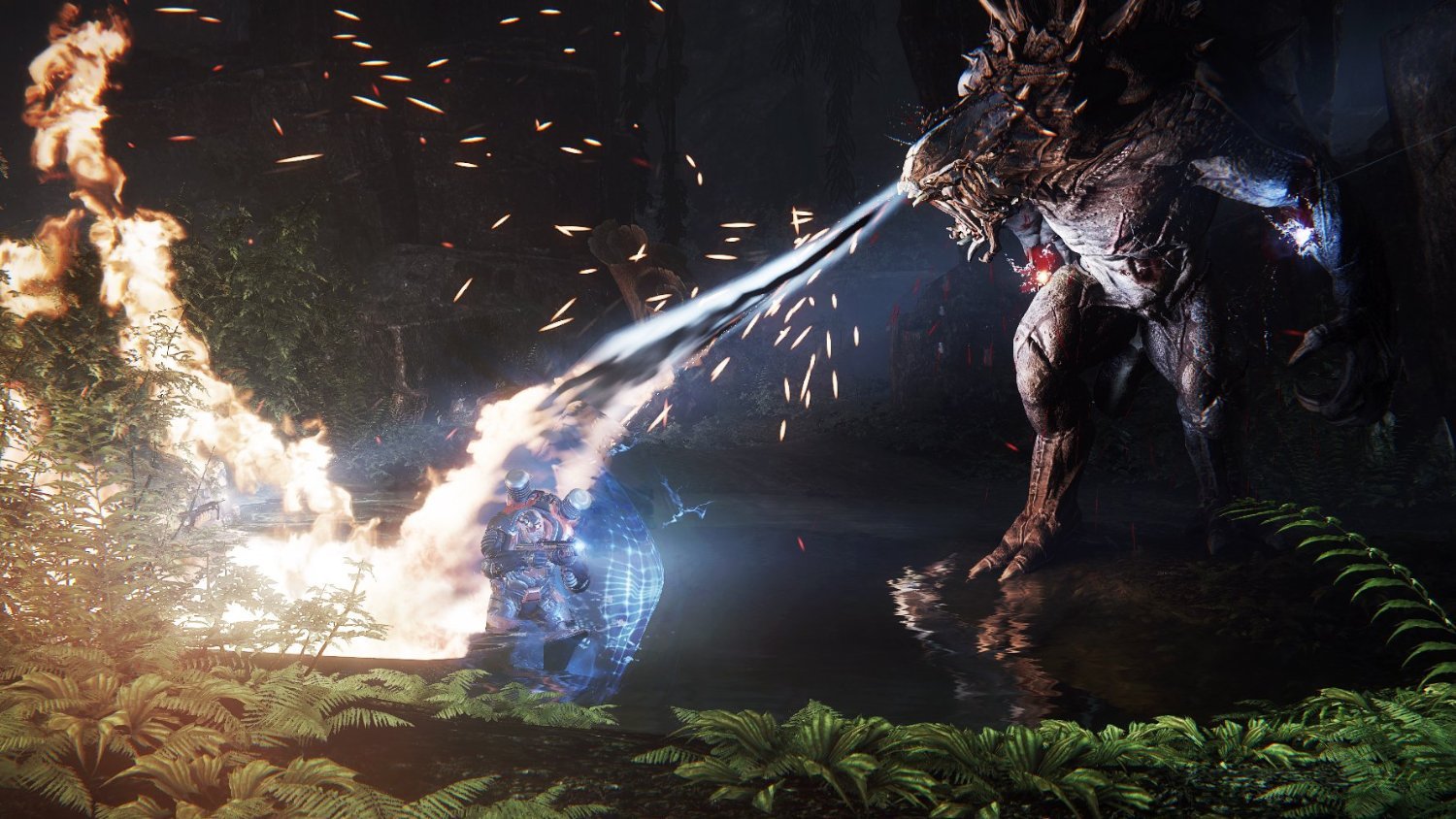 Robb expected questions about Evolve‘s DLC-abetting design, and was quick to label Ashton’s choice of words as unfortunate. He attempted to assuage any fears Evolve was some sort of DLC delivery system, explaining the game’s architecture was designed to be adaptable, something easily expanded upon. The furor, he said, stemmed from a misunderstanding and a lack of clarity.

“That was hugely disheartening for me,” Robb said candidly. “I don’t like people thinking we’re doing underhanded, dirty shit.”

It’s easy to take Robb at his word. Unlike other executives, he comes into work wearing a hoodie and trainers rather than a suit and tie. He sports a long, silvery beard, like many others at the studio, refusing to clip until the game ships (for charity, no less). He’s genuine, down to earth, the epitome of casual, and the first to admit he isn’t really much of a businessman.

Robb describes himself as more of a “gamer geek,” one who’s just “lucky enough to make them.” He keeps a bearded dragon in Turtle Rock’s open-air office, where the seating is in a constant state of flux and the company’s newest intern may be sitting beside one of the founders. He talks like a real person rather than some corporate robot, complete with liberal use of profanity and cartoon character voices.

“We have the game set up in such a way that we can expand upon it if that is the desire,” Robb told me. “Our plan is one we pushed for as consumers. Never split the community, no pay to win, all that kind of bullshit that are hallmarks of DLC plans specifically made to leech money out of people.”

Money is definitely a concern, though, as Robb points out the studio has bills to pay and nearly a hundred families to support. Plus, there’s a money-hungry publisher involved. Still, it seems like Turtle Rock is at least advocating for a more consumer-friendly post-release business model. 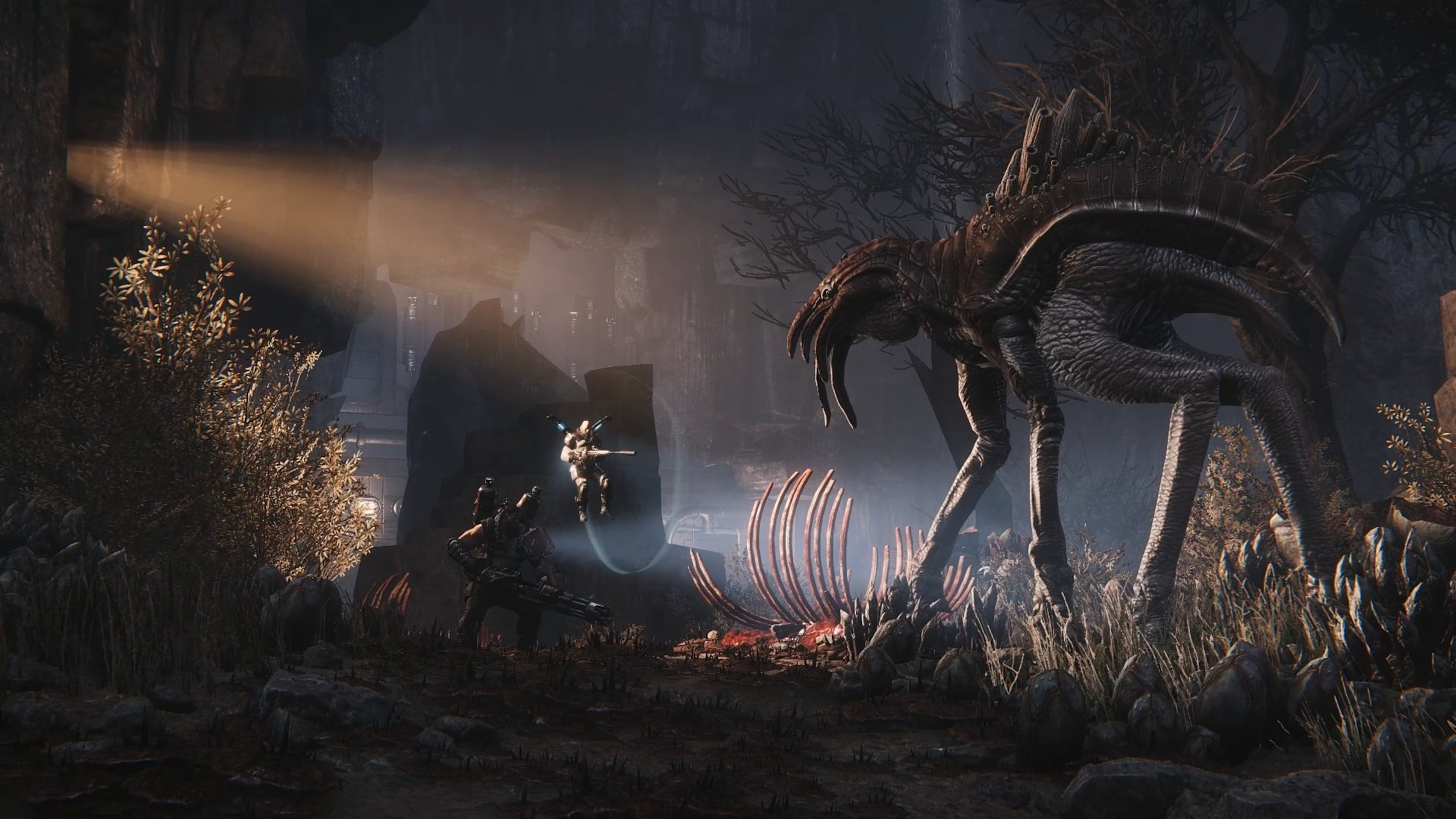 “If we’re going to make money we want to feel good about the way we’ve done it,” Robb said. “We don’t want to feel like we’ve hoodwinked people.”

That doesn’t mean he views DLC as some sort of taboo, though.

“I don’t quite understand the knee-jerk negative reaction to DLC. Because I know for me, as a gamer, when I have a game I really love and I play it for a while and I want more, I want more. I’ll pay for it. I don’t mind.”

Robb is cognizant the industry is teeming with parasitic DLC programs, and was quick to point out all of Evolve‘s maps will be free. “Good,” I tell him. “People hate shelling out $20 for map packs.” So does Robb. At this point in the conversation, I recall glancing back at a 2K Games PR handler sitting in the corner, trying not to squirm as Robb made one unbridled remark after the next.

“I think a lot of people probably feel like [DLC] is milking the community,” Robb admitted. “That’s fair because a lot of companies approach it that way.”

“All our maps are gonna be free,” he told me again, and would do so a few more times before our talk was over. “Everyone gets that. Any of the monsters or hunters we put out are going to be paid DLC, but the nice thing about that, and this is something we pushed for really hard, even if you don’t buy it you can play against it. So it’s still not splitting the community. And not only is it not splitting the community, but it’s enriching your game experience even if you’re not interested.”

Turtle Rock hopes Evolve is something people will continue to play for a long time and views DLC as a way to keep folks invested in the experience.

“Just keeping the game fresh in some way is always a good way to bring people back for more. Any of the DLC we make, our plans around DLC are about introducing new experiences. We want to have more content that significantly changes the game and breathes life into all the stuff that came first.” 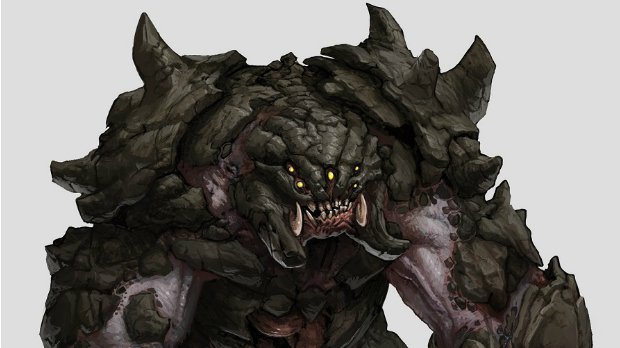 “You have all these maps, and maybe you get bored of them after a while, but you throw a new monster in there and that has a ripple effect across the entire game.”

It sounds reasonable, the way Robb explains it one-on-one in a secluded room, but the way 2K presents it to the world at large comes across as anything but. Evolve projects like an experience that’s being carved up part and parcel between its downloadable pre-order bonus monster (which retails for a hefty $15) and a complicated web of premium bundles.

It’s disheartening, really. 2K is preying on a part of your psyche that fears if you don’t get the biggest, most expensive package you’ll wind up missing out or paying more later. Meanwhile, you have no idea if you’ll even enjoy the $60 base game in the first place.

“There are way too many ideas we cannot fit into the box,” Robb told me. “Budget-wise, time-wise, there’s too much cool shit for us to leave it laying there and never do anything with it. But we wanted to be good about it as consumers.”

Robb seems like his heart is in the right place, but just as that 2K representative lurked at the back of the room, a massive corporation with stock and investors looms over the whole operation. This isn’t some indie passion project. It would likely be handled differently if it were. There are other interests involved, and a lot riding on this project’s success.

Evolve was salvaged from THQ’s wreckage, purchased by Take-Two Interactive for $10.8 million. They want a return on that investment. As always, consumers will be the ones footing the bill.