Another panel at EVO was the Ultimate Marvel vs. Capcom 3 panel, which I was personally excited for. Being a huge Marvel vs. Capcom 3 fan, I wanted to see what Niitsuma-san had to say about this newly announced game. Serving on this panel with producer Ryoto Niitsuma were Capcom’s Seth Killian and Neo_G, who is the battle designer for UMvC3 and many other Capcom fighting games.

Niitsuma-san started off the panel by mentioning that this would be geared towards the fighting game fan. He noted that the key additions were the highly anticipated Spectator mode and tweaks to X-factor. After showing a slide of all the characters that are included in the game, the panel went on to talk a little about each announced character as well as hold a question-and-answer session with a special surprise at the end!

One person asked about the evolution of X-factor. Niitsuma-san explained that the original idea came from the fact that in Marvel vs. Capcom 2, often times the match would come down to one character versus three, with practically no way for comeback. X-factor was a feature designed to always give a player the chance for victory.

Another question was asked by famed MvC2 player Cl0ckwork. He wanted to know if the producers were surprised by the evolution of gameplay in MvC2. Neo_G responded that the fighting game community ended up performing tricks that the designers themselves didn’t know were actually possible. 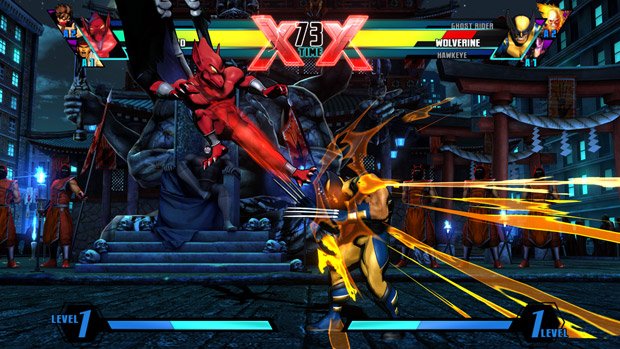 After confirming that Ultimate Marvel vs. Capcom 3 would launch simultaneously with a strategy guide, they offered the audience a surprise. With them was a list of every single change made to each character plus some general character changes. One change for every character is that each will have a move that can do increased damage with button mashing. The audience laughed when it was revealed that Wesker would have the ability to speed up if he hit the opponent with his sunglasses, and erupted into cheers when they said Tron lost her invincibility on the assist and that Sentinel had even LESS health…albeit by a fraction.

This was a really fun panel to attend, since everyone in the audience was a huge fan of the game, and it showed. Later on, I will have time to meet with Niitsuma-san and ask more questions about what was discussed at the panel, so keep reading for more coverage from EVO!