When people talk about EVO, most people recall the big names in Street Fighter or Marvel vs. Capcom 3, such as Daigo Umehara and Justin Wong. However, Capcom games aren’t the only ones getting representation at this fighting event. One of my favorite fighting games when it came out, BlazBlue: Continuum Shift 2, was also present this year in a competitive format.

While at EVO though, it was noticeable that most eyes were on the big Capcom fighters. Wanting to get a sense of the BlazBlue community that existed here, I sat down with BlazBlue competitive gamer DacidBro to talk briefly about his love of this game and the tournament scene.

When I asked him about why he loved BlazBlue, he mentioned that he really enjoyed the variety of the characters. According to him, whereas the other games tend to deal with balance issues, in BlazBlue, once a character gains an offense, every one of them has the opportunity to continue that aggression and be competitive. 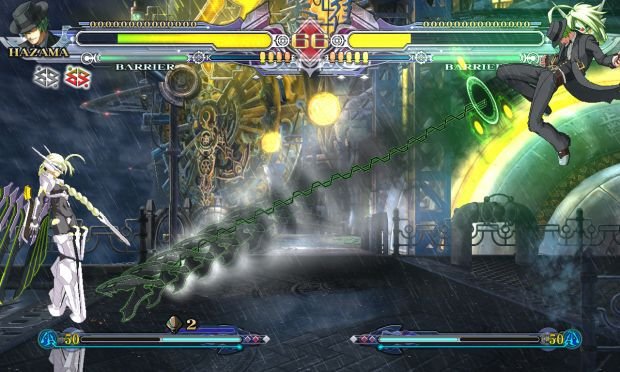 As to his thoughts on why BlazBlue doesn’t get as much attention at EVO, he believed it was because of the fact that Street Fighter is a game marketed towards Americans, where BlazBlue has an anime feel that leads to a more niche following. It’s not all bad, however, since this community is very tight knit and seems to avoid the harsh level of competition that can be exhibited by the other more popular fighters. There is hope that the two communities can come together, as evidenced by the level of interaction that he’s had with the Capcom players.

While sitting in the audience during the BlazBlue Grand finals, and watching Spark fight his way back from Losers match to win it all, there was no doubt that this crowd was just as electric as the Street Fighter scene. So whether you are a fan of the higher-profile fighting games, or even the more niche ones, attending EVO to feel the hype is definitely worth your while.