The Cruciatus Curse of mobile gaming

Since last year, I’ve been making a push for more and better mobile game coverage on Destructoid. I know some of our readers don’t like that — making me fully aware of their displeasure in the comments — but there really is a fair share of charming, engrossing, and well-made mobile titles that can certainly appeal to long-time console and PC gamers. In just the past five months I’ve had the pleasure of reviewing top-notch premium mobile games like Florence, Gorogoa, Oddmar, and Part Time UFO. I’ve also reviewed a nice slice of free-to-play games I thought well enough of to actually put the time and effort into playing for the sake of a full review.

For every game I cover, there are three or four I play for a day and move on from. I can’t write about every game and I decided last year it’s better to focus on the good mobile games rather than bog down the site with articles that amount to nothing more than “This game is shit.” There are exceptions, but I try to keep things positive. That’s why I won’t be covering Marvel Strike Force or The Sims Mobile for instance. They’re both mediocre games, but not so repulsive they deserve public condemnation.

Harry Potter: Hogwarts Mystery, however, is so fucking awful it deserves every bit of scorn it has coming its way.

As the first title from Portkey Games, the label founded last year by Warner Bros. Interactive Entertainment to publish games based on The Wizarding World, Hogwarts Mystery casts players in the role of a new student at Hogwarts years before the arrival of Harry Potter with a dark family history of their own. Playing as either a boy or a girl, I’m constantly teased and reminded of my older brother Jacob who was previously expelled from the school and has since disappeared. There are rumors he went mad or joined up with He Who Must Not Be Named. During his tenure at Hogwarts, Jacob was obsessed with something called The Cursed Vaults, which may or may not be real.

Like the book series, the story is divided into years. I create my character, choose my house, and begin attending classes while pushing forward with the narrative. I make friends, Rowan Khanna and Ben Copper, and find myself a rival in Merula, a Slytherin student. The story, through the first year at least, is not engaging in the slightest. And I could sit here and do that thing where game bloggers pretending to be journalists pad out an article by breaking down the visuals and music and whatnot, but none of that matters when a game is this goddamn bad.

Harry Potter: Hogwarts Mystery bills itself as a narrative-driven RPG, but the only role I’m playing is one of a Harry Potter fan who is incredibly disappointed. An absolute relic from the free-to-play 1.0 era of mobile gaming, Hogwarts Mystery thinks it can squeeze money out of players by putting time restrictions on everything.

The basic setup has me going on story quests, class lessons, or various side-quests, all of which use energy. Energy is extremely limited. To succeed and advance the story or class sessions, I have to obtain a certain number of stars for each quest/lesson. This is done simply by tapping the screen until I spend enough energy to nab a star. These quests have strict time limits, so if I forget about it, I lose and have to start from the beginning. Most of these quests use a great deal of energy, far above the 25 points I have available, meaning this is the most common screen I see in the game: 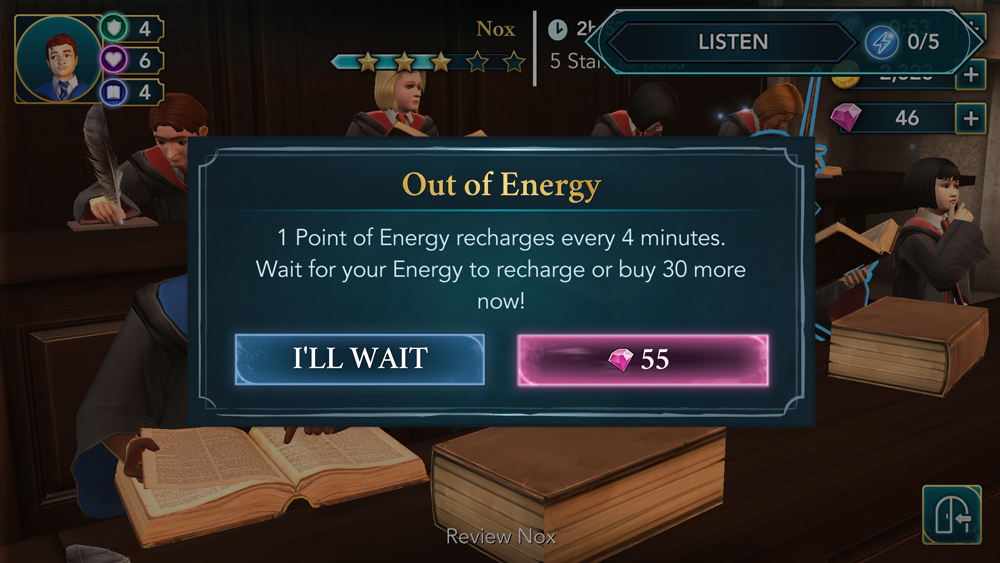 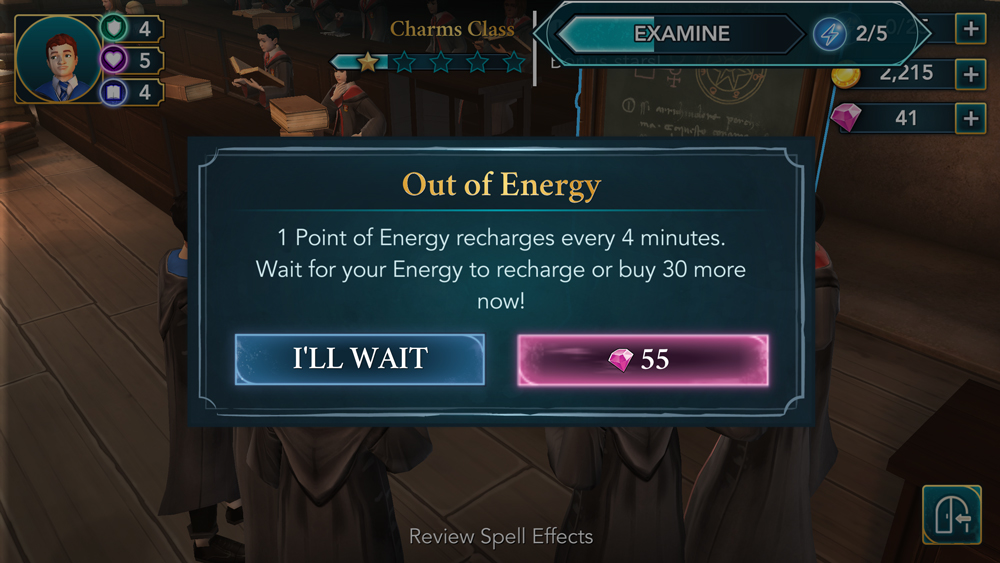 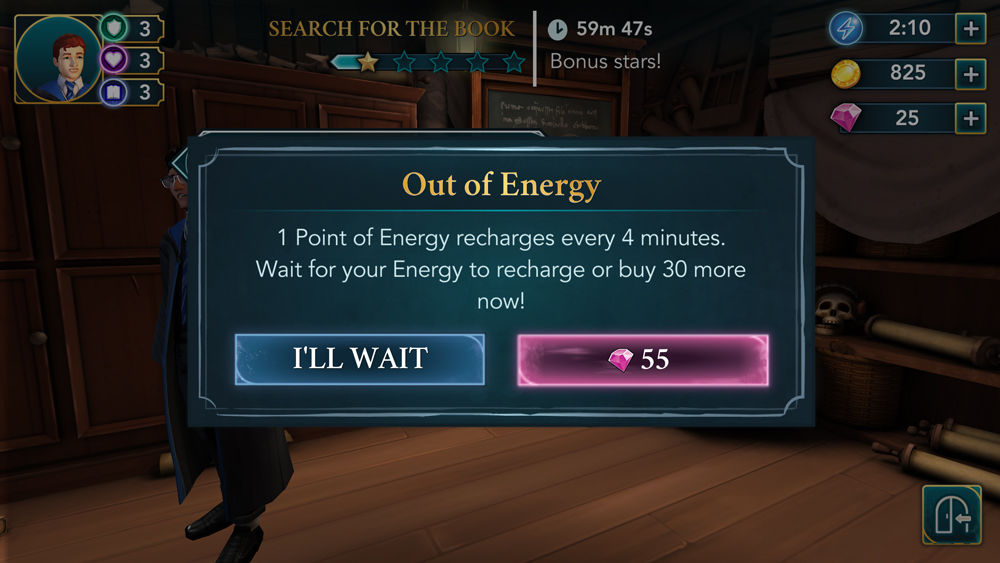 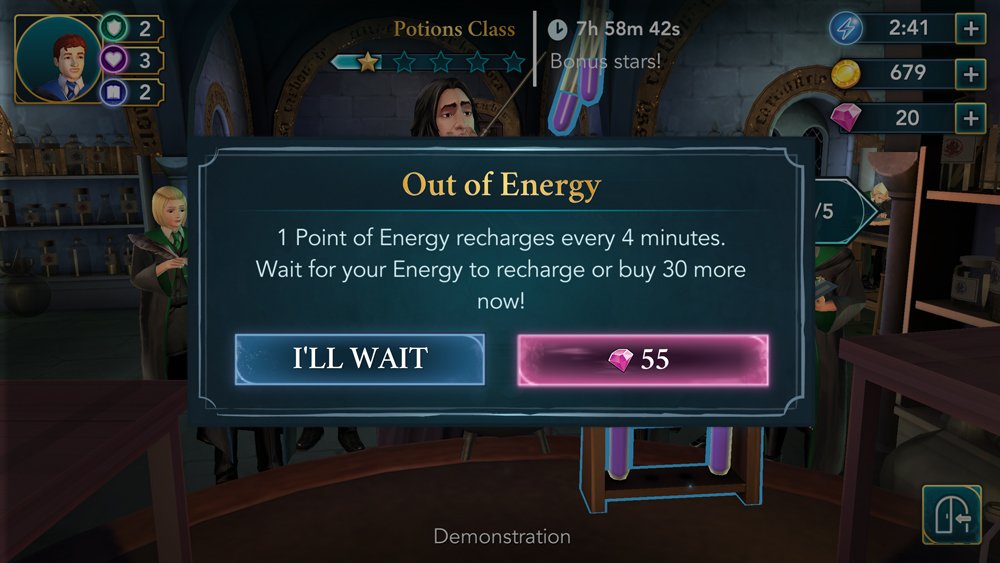 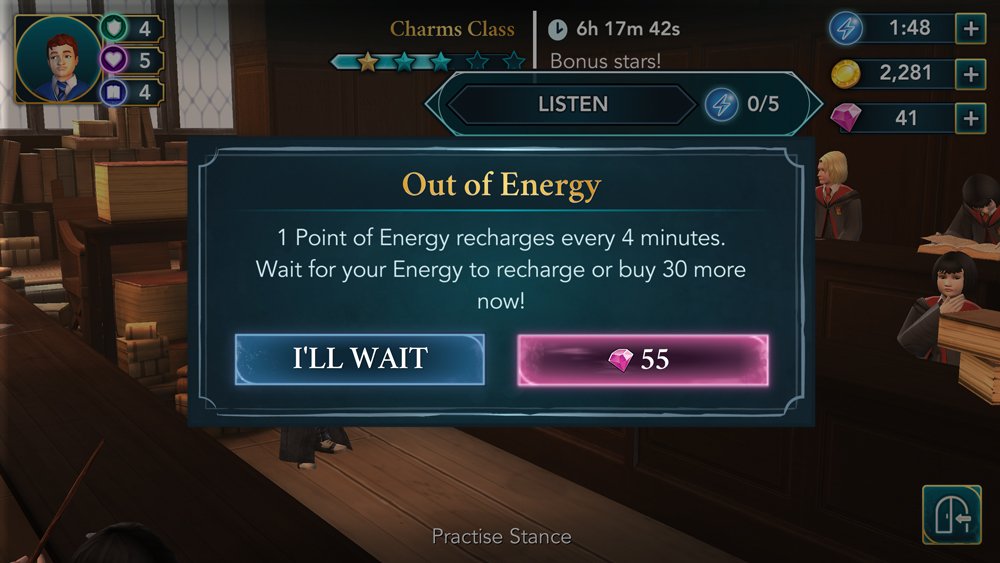 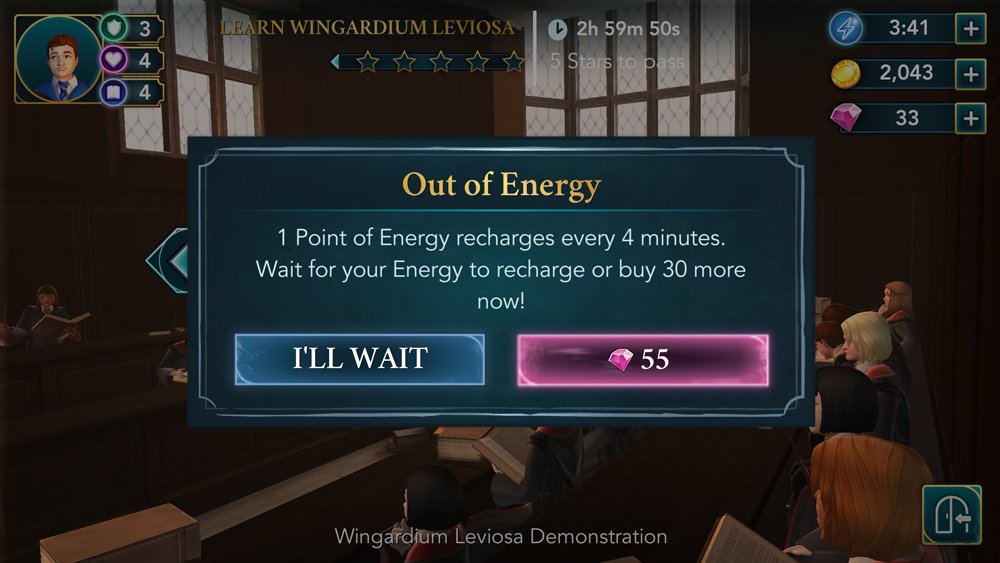 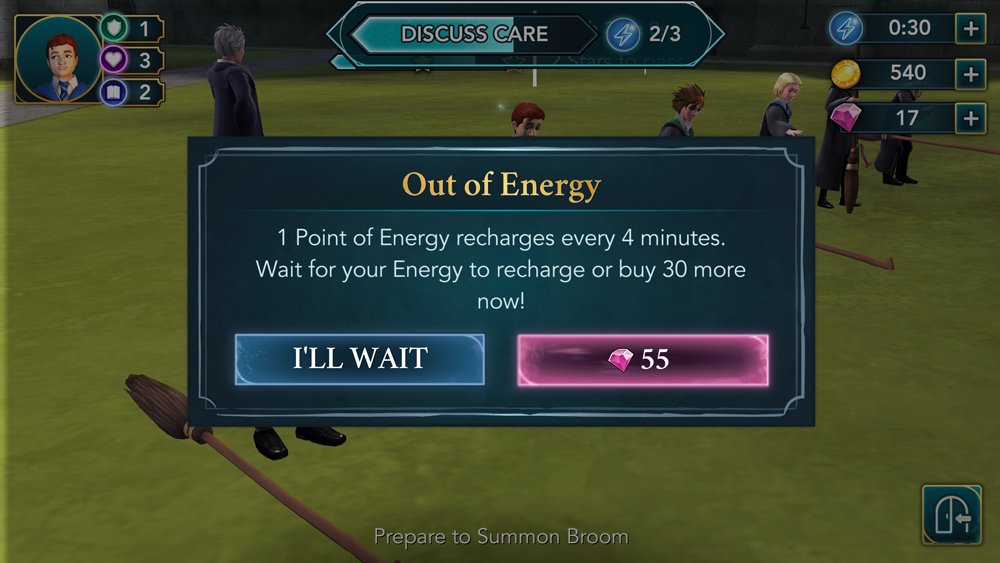 Each of those images is from a different quest or lesson I ran out of energy on. It happens a lot. Yes, there are little energy balls I can find by tapping certain objects around the courtyards and corridors of Hogwarts, but it’s not like there’s an endless supply just waiting to be found. I’m eventually going to have to pay up or wait, and the game will throw my character into situations it thinks will push me towards choosing the former rather than the latter.

Perhaps you’ve seen it discussed online since this game launched. Very early in the story, my character is being strangled by Devil’s Snare and the only thing I can do to save myself is to cast a Lumos spell. This takes energy, and when I run dry, I’m left to watch my little wizard struggle for air as a vine chokes him out.

Want to save him right away? All I have to do is pay $4.99 for 130 gems I can use to buy 90 energy points that will last me probably five minutes. Or, I can spend half those gems on energy points and save the rest for unlocking the story as the game holds the advancement of the narrative behind a pay-or-wait wall for no other reason than I’m proceeding too fast. 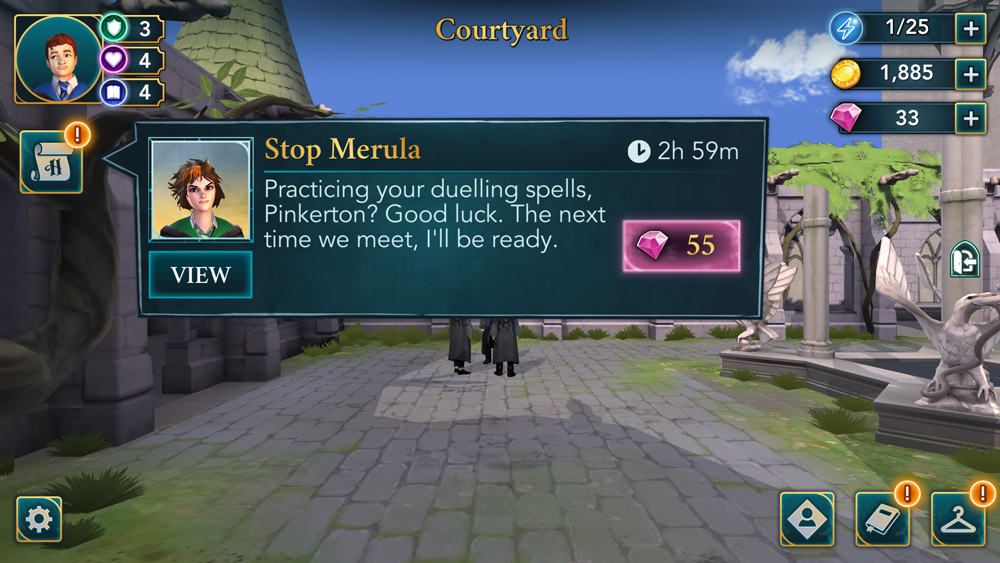 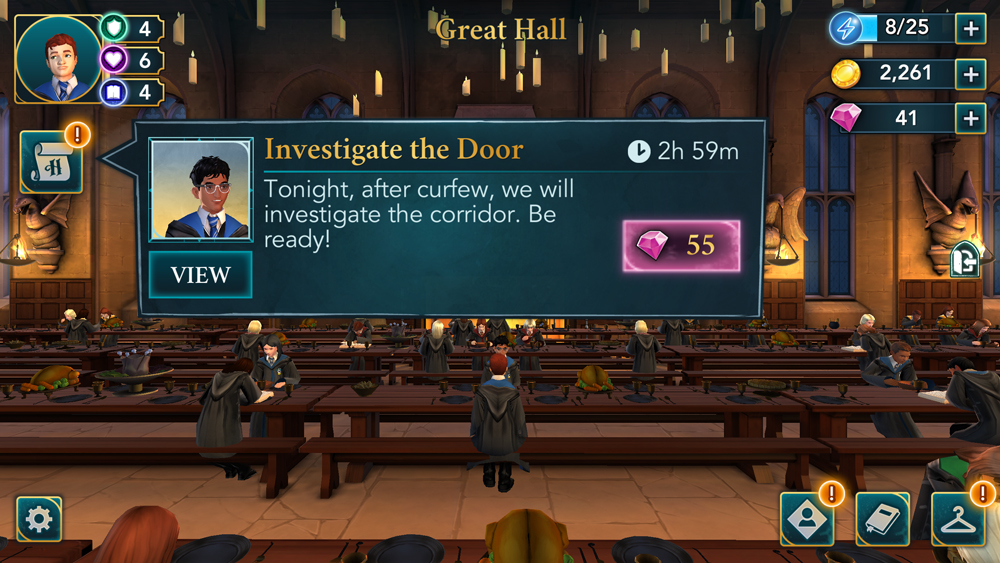 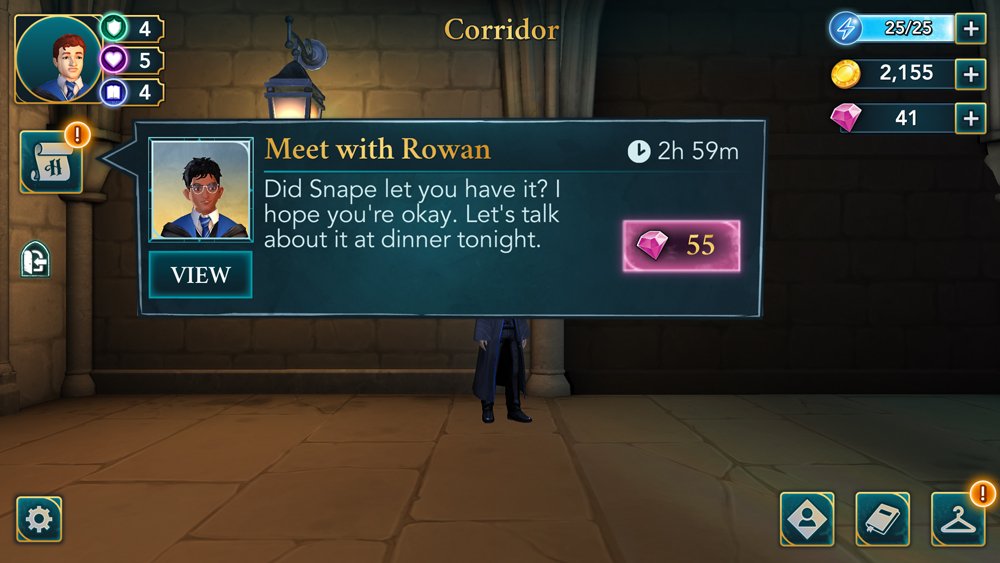 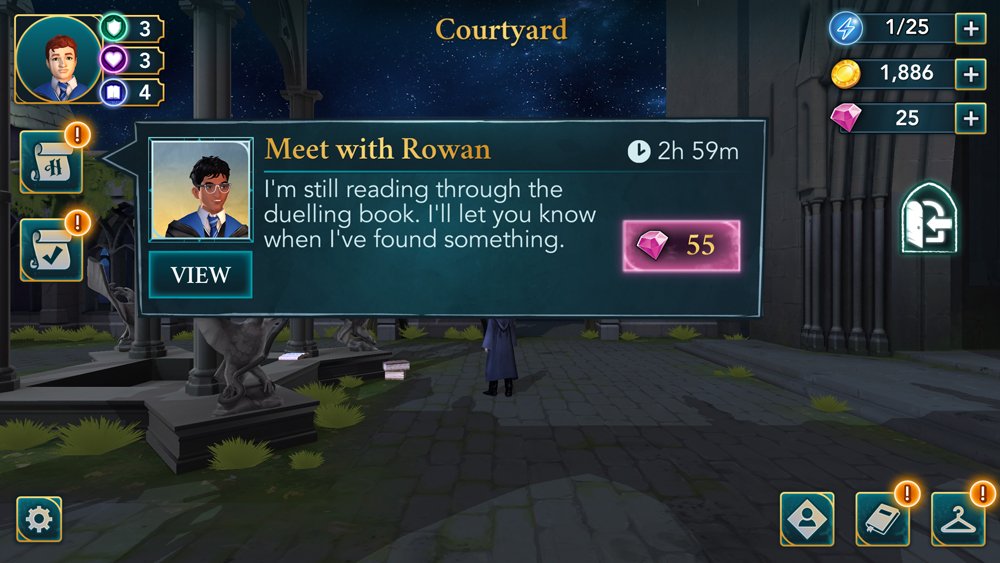 Hogwarts Mystery‘s biggest flaw is it commits the cardinal sin of free-to-play games: it imposes restrictions on players long before they ever have a chance to be hooked. Getting caught in the Devil’s Snare happens approximately 10 minutes into the game. Forcing me to choose between waiting or paying so soon has me going with option number three: deleting it off my phone.

Even if there were no waiting or the game was extremely generous with its energy and did adequately build up to its paywall restrictions, Hogwarts Mystery is still awful. It’s a basic bitch of a mobile game, where all gameplay is boiled down to just tapping the screen until I run out of energy, participating in rock-paper-scissor magic duels, or making friends and advancing the story through question and answer sessions. There’s no variety, only monotony. And all of this is to say nothing of the ridiculous prices it charges for character customization options.

It’s clear Portkey Games thinks the allure of a new mystery at Hogwarts will be enough to snare long-time Potter fans. For some, it might be. There are already websites doing guides on it hoping it’ll be the next internet obsession. Me, I think it’s a horrid and wretched game; one that deserves to be dragged into the Forbidden Forest by a hoard of centaurs. If you absolutely need something new on your phone that you don’t want to pay for, check out Shadowgun Legends or the Bayonetta-like Honkai Impact 3rd. They may not be the best games available for mobile, but they’re certainly better than this shit.