This weekend, in Akihabara’s event space, an event called Dengeki Game Festival 2011 took place. Dengeki, the fine publishers of several Japanese gaming magazines, hosted this event, and they invited the Japanese gaming public to attend. Held in Akiba’s Belle Salle event space, this event welcomed companies like Sega, Namco and Arc System Works among others to show off their latest games. Sony even had an entire floor to themselves at this event.

Each company showed of new and upcoming titles, and I managed to play a few. I also snapped a few pictures. Read on for impressions of these games as well as for pictures from the event.

The two-floor event was packed. The main floor was mostly game kiosks surrounding a main stage where public performances and announcements took place. And lots of gamers. 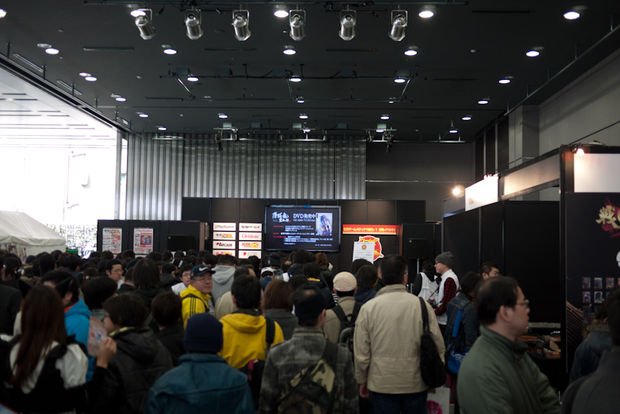 Believe it or not, they had some mad Magic the Gathering action going on at the event. They had a couple of tables, lots of spectators and a healthy line. They even gave me a free Japanese M:TG starter deck. Does somebody want this thing? 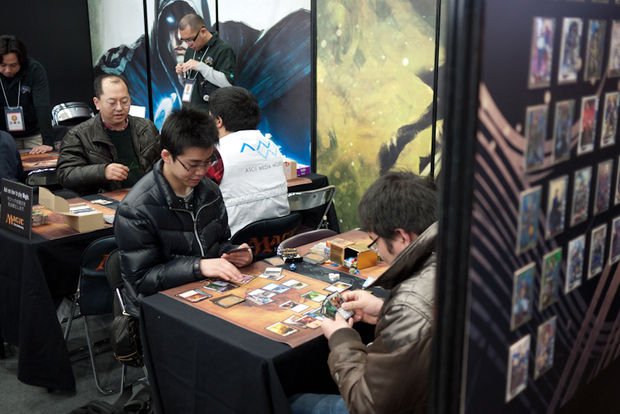 Not all games gathered lines, but I can tell you the ones that did. Arc’s BlazBlue for PSP always had a healthy line, as did Acquire’s Akiba’s Trip. Another crowd pleaser was this cool looking arcade card game from Sega. 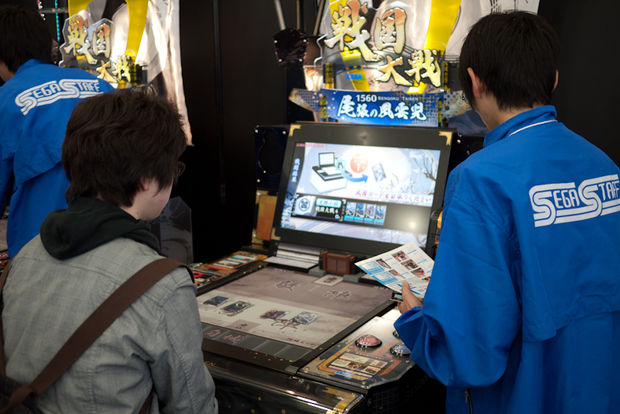 Alienware had some fancy gaming machines to show off, with Call of Duty and some other cute MMOs running on them. I’ll let you guess which one had the better reception. 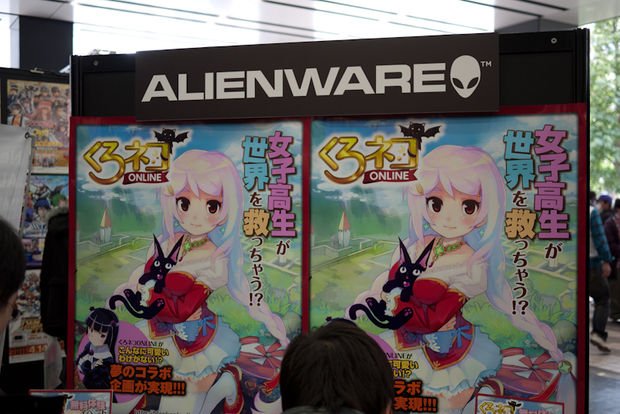 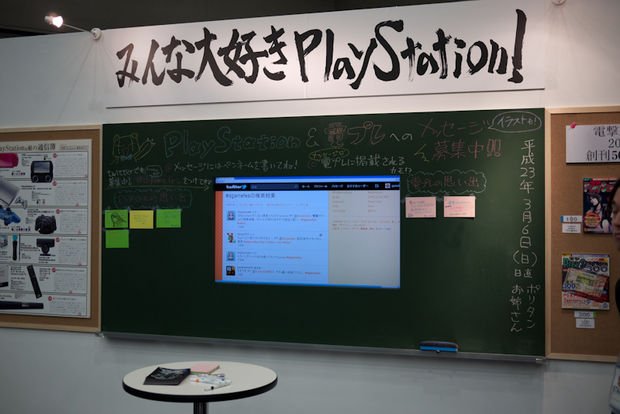 Down below, on the first basement floor, Sony had a little bit of everything set up for play. They showed off the new Silver PS3 (see our gallery below). They also had a big Twitter wall, shown above. It was here that I got some time in on a few titles like the hilarious Way of the Samurai 4 the super arcade-y Motorstorm 3. I spent some quality time with Yakuza of the Dead and Patapon 3. As for the rest of what was there we’ve already previewed some of it, and the rest probably isn’t coming to the US market. Or already has.

Yakuza of the End is a trip. Take Yakuza, mix in a bit of Dead Rising zombie action, the accessibility and arcade-like feeling of House of the Dead, and you’ve got the right idea for this upcoming PS3 release. The demo was short, but in it I got to shoot a lot of guns. While the majority of the demo was mindless shooting, there were some button-timed events that had you doing things like blowing up gas cans or shooting flame grenades for massive damage. 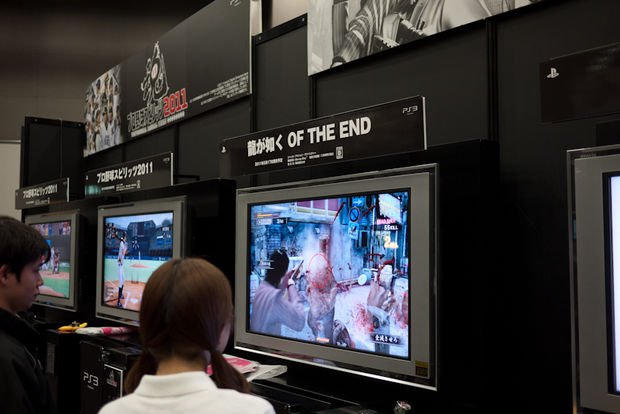 The zombies in this game are definitely more varied when compared to other recent zombie games.. There’s the standard working stiff turned zombie, but I also saw fat, gassy guys, screaming blonde subbosses, school girls and even a hipster zombie. I killed that hipster bastard quick.

The demo itself was kind of weak and short, but I liked the tight corridor segments and how easy it was to have fun chaining kills. This game is going to be a mindless pleasure when it comes out. 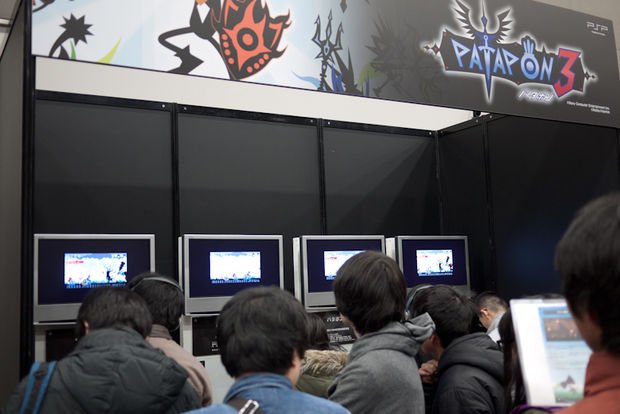 Patapon 3 was playable in a four-player co-op session, which was really cool. You know that this PSP game has you tapping out beats to make your little pata-guys attack, progress, and eventually conquer. This new game leans more towards Action RPG, and with the co-op play, it’s quite a bit more appealing to me than past tiles. Your party will move together mostly, with each member tapping commands listed at the bottom of the screen, to the beat, to advance and take down enemies. As always, the graphics are lovely, especially considering that you’re really looking at a bunch of shilouettes. There were huge, screen-filling sub-bosses to mow down in this short demo. When we finished, we were rewarded items from our quest. Again, it was very Action RPG like.

On the event stage Gust showed a trailer that left watchers scratching their heads. This was a teaser for a new title, but we got nothing in the way of name, date or platform. We know it’s a new Atelier game, but that’s it. It’s on a Sony system, that’s for sure. Of course, Dengeki has screenshots from the trailer. Here’s one: 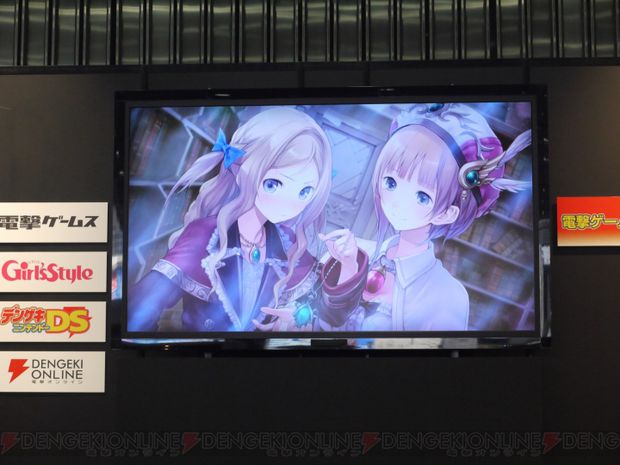 Japanese people love to wait in line. At the kiosks, for food, for the bathroom — anything. I saw a massive, slowly crawling line for something off to the side of the stage. It turned out to be a pop-up shop at the event selling game-related merchandise aimed at girls. There had to be hundreds of people in line to buy things like posters and junk. Japanese girls are silly. 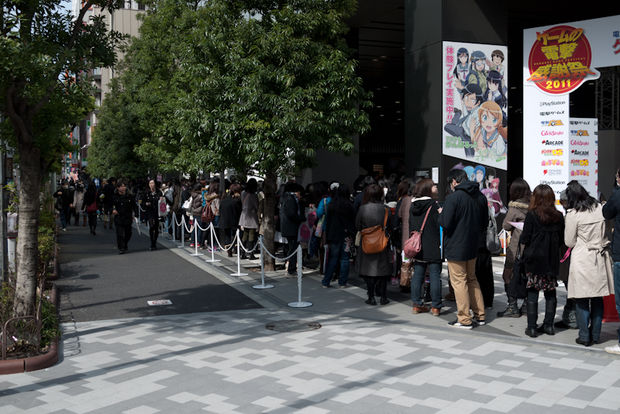 Although nothing big came from it, Dengeki Game Festival 2011 was a fun little event. There was a Monster Hunter tournament, girls singing on stage, freebies, and plenty of new games to play. I almost felt bad doing something as easy and fun as this while the rest of the Destructoid team was slaving away at GDC 2011. Almost.