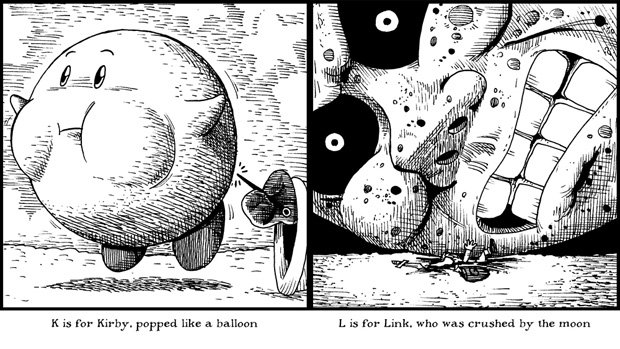 A couple weeks back, brentalfloss the comic began an arc parodying the dark comedy children’s book The Gashlycrumb Tinies — that book’s author, Edward Gorey, is the subject of today’s Google Doodle, by the by. Anyway, “The Game Over Tinies” features entries for every letter of the alphabet, each representing a game character’s untimely demise. And it’s deliciously clever.

Since my previous post, the comic covered the remaining letters, K-Z, which appeared in strips #145, #146, #147, and #148. The heroes and villains on stage this time include Mario (of course), Kirby, Final Fantasy VI‘s Ultros, and even SoulCalibur‘s Voldo. Most deaths are quite appropriate for their respective characters, but some are so out of left field — I’m looking at you, X — that they are nevertheless funny.

I really enjoyed these, and I hope you do to. I wouldn’t mind plunking down money for a physical collection of all the strips!