It was almost a year ago (ten months, more accurately) when I sat down with EVE: Valkyrie‘s developers, and they told me “We’re ready to ship when Oculus is ready to ship.” At the time, Valkyrie was considered a flagship title for virtual reality, but it’s unclear if that’s still the case. There are a lot more entrants in the arena now, after all. However, EVE: Valkyrie‘s developers have their sights set on a more aggressive goal.

“We just extend our ambitions,” Valkyrie executive producer Owen O’Brien told me when asked what it’s like to stretch out the production schedule an extra year on a title that has been technically ready for quite some time. O’Brien elaborated “A year ago, I don’t think I would’ve stood up and said ‘I want to be the best multiplayer game in VR,’ but now I feel completely comfortable saying that. So, I think an extra year in the production cycle, it’s fine because we’re not a huge team. We’re working on bleeding edge technology that is still developing. CCP as a company kind of knew what they were getting into. That’s something that was to be expected with VR, and we’re still very happy to be at the forefront of it.”

But, not only does O’Brien want Valkyrie to be a heralded multiplayer title, he wants it to be the pinnacle of VR competition. Thinking about his ultimate goal for Valkyrie several years down the road, he offered “I would love this to be the eSports of VR.”

Odds are decent that Valkyrie might hold that ambitious mantle because of the inherent nature of VR. One thing that O’Brien’s CCP Newcastle team quickly found out is that VR works best when there’s a minimal disconnect between the real and the immersive world. “For every bit of immersion that you’re getting in this other world, there’s less and less of the real world there. We’re going for full immersion, because if you end up somewhere between the two, that can make simulation sickness worse and you’ll feel weird. Like, we really avoid, for example, big hand movements or your character doing something that your brain tells you you’re not doing. Even our controller is positioned not in a joystick position, but in the position of the console controller. We very minimally move the pilot. I mean, the ship moves, but we don’t do any touching other screens because that really jars you out of the experience. So, I actually think in our experience, the more immersed you are, the less likely you are to get simulation sickness.”

That’s the kind of learning on-the-job that CCP (and, really, all VR developers) have had to deal with. As O’Brien says “It’s becoming less and less true, but a year ago, there were no real VR experts. We’re kind of learning, and talking to the manufacturers, there aren’t any hard and fast rules. They have guidelines of what to try to do or what to try to avoid, but really, we’re all still learning.” 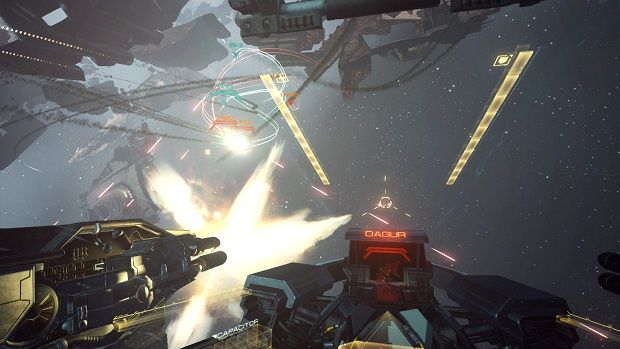 And, it’s that learning curve which hamstrings a current eSports favorite: first-person shooters. Developers are working on integrating FPS to virtual reality, but no one’s done it particularly well yet. O’Brien thinks it’ll eventually happen, but he’s not sure when. “I’m sure at some point, someone will crack FPS, but they haven’t yet. FPS in VR is very disorientating because your body is doing things that you’re not doing. There are set ups that you can get where you’re walking on a treadmill, but one of the disconnects that breaks immersion is when your body is doing something in the immersive world that you’re not doing in the real world. It’s little things, like in most first-person shooters, the gun is your hands, but in real life, you could be looking around. There are a lot of things to solve there. But, the main thing is locomotion. You’re running and jumping in the virtual world, but you’re really seated in a sofa. That’s very disorientating for the body.”

For all the extra time that CCP has had to spend on Valkyrie, it legitimately seems like time well-spent. The game running on the new Crescent Bay headset is a significant upgrade over what we’ve seen in the past. Despite being a space dog-fighting game, the world is now filled with enough debris and objects to feel occupied. There’s also a new emphasis on color that makes the world vibrant and enjoyable to cruise around in. Even dying is neat because the respawn screen puts you inside a pod that seems like it’s ripped straight out of Alien‘s Nostromo.

However, even if Oculus launched, say, six months ago, O’Brien is confident that Valkyrie would’ve eventually ended up where it is today (and, further, where it’ll eventually go). “We would’ve shipped a smaller experience and built on it,” he said. That building could go in any direction, but an obvious one is to connect it to the greater EVE universe. O’Brien would like to eventually do that, but it’s not a priority now. 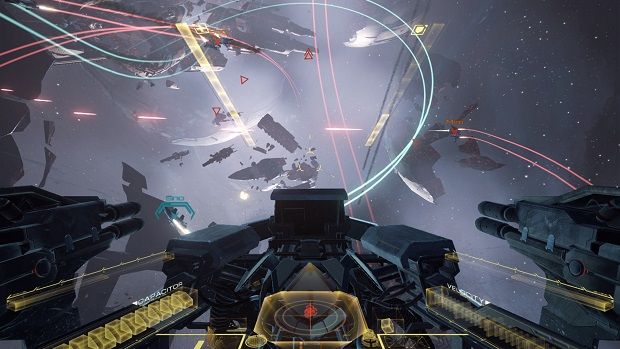 “We have a small team, and I want to stay focused on making a great competitive multiplayer game,” O’Brien stated. He continued, “I think you need to focus on one thing: the game, rather than what’s the link to the EVE universe. I think once the game’s up and running and working well, then we can look at longer term things. Ultimately, I don’t know how many years hence it’d be, but it’d be great if the battle you just saw was real capsuleers there, as well. But right now, I want to give that experience in the EVE universe without actually getting hamstrung by a direct connection.”

He’s right; talking about melding Valkyrie into EVE Online is kind of putting the cart before the horse. For the time being, getting this game into people’s hands is the main priority. O’Brien acknowledges that it won’t be easy, but that road is getting less rocky.

“There are more and more people coming into the arena, and that can only be good for VR in general. There are a lot of people that are starting to invest because the tech does work now,” O’Brien commented. “I think the key to adoption is going to be facilitating easy trial, because I haven’t met anybody yet who has tried one of these headsets and gone ‘eh, it wasn’t great.’ Once people have done that, as long as it’s at the right price point and not too hard of a tech setup – right now, I think it’s more about making it easy for the consumer rather than the quality of the experience, because the quality of the experience is definitely there.”

But, virtual reality is nigh impossible to convey second-hand. It really is something that needs to be personally experienced. O’Brien concluded the interview by empathizing with anyone who’s VR-wary, even if he’s a believer. “There are two types of people in the world: There are people who have tried a VR headset and those who haven’t. People who have tried are all converts, and people who haven’t are all skeptics because VR has already been the next big thing so many times.”