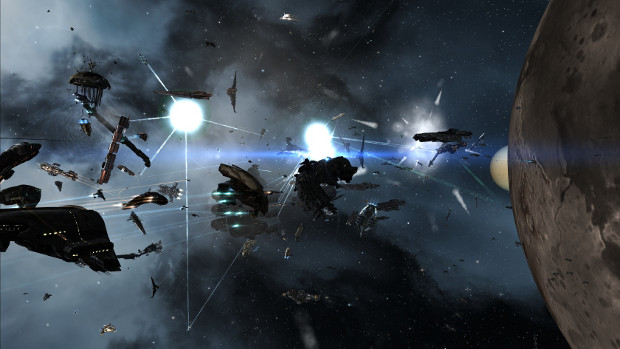 Some people just want to watch the world burn. Goonswarm, EVE Online’s famed alliance of griefers, are known to do things that are simply astounding. Their latest project has been months in the making, and it’s lighting up the space around Jita, the largest trade hub in-game.

“Burn Jita” is a campaign by Goonswarm to destroy EVE’s delicate economy by assaulting all the trade and industry ships in the game’s largest hub. The alliance created about 14,000 thrashers, a small attack vessel worth about one million ISK, EVE’s currency. Since you can buy ISK with real world money, you could say that this fleet of ships is worth upwards of $38,000. And that’s without the cost of weapons or fittings.

Most developers would put a stop to this. Not CCP. They love it. Jon Lander, EVE’s senior producer said  “I tell you what, it’s going to be f***ing brilliant, absolutely brilliant.” CCP have even gone so far as to set up Jita on a separate server, just to handle the massive player load. They want players to be able to do whatever they want. If they want to mess things up, then they can mess things up.

The devs go so far as to even say that this could be a good thing in the long run. By destroying a lot of expensive ships, those players will be forced to work their way back up again. In high-security space, it’s possible to fly a very expensive ship for a long time without having to buy a new one. If enough of these ships are destroyed, players will have to buy or build new ones. This will cause an influx of money to go to things that might not be a part of the current stable economy.

Whatever the reason for it, or whatever the actual impact may be, it sure is pretty fun to look at.