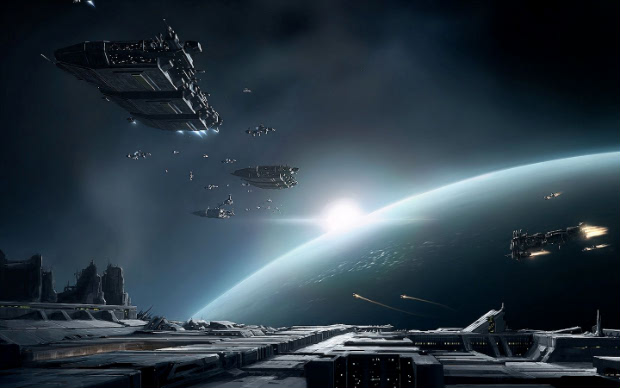 Mega-popular MMO EVE Online prides itself on its realistic, player-controlled economy. In a scarily familiar episode of games-imitating-life, EBank, EVE‘s largest virtual bank, has been shut down after a former CEO embezzled 200 billion ISK from it.

Known only as “Ricdic,” the former CEO is actually a 20-something Australian guy who works in the tech industry, according to Reuters. After he made off with a fat wad of virtual spacebucks, he sold them for about $5000 worth of realbucks, which he used to make a down payment on a house and pay some medical bills. I probably would’ve used the loot to buy PCP and Taiwanese ladyboys, but to each his own.

When the rest of the EVE community caught wind of the theft, things got a little nasty. According to the New York Times, 5.5 trillion ISK were quickly pulled from EBank, effectively crippling the bank’s ability to operate or give out loans. There are about 300,000 EVE users, 130,000 of which had accounts with EBank. With thousands of them clamoring to be refunded in full, some users are appealing directly to the developers for help, but CCP’s laissez-faire approach will probably preclude any sort of intervention — this wouldn’t be the first time they’ve let players sort out their own messes.

Ricdic has been banned from EVE, but not for embezzlement: trading in-game assets for cash is against EVE‘s terms of service. If he had simply stolen the money and used it in game, he’d still be playing EVE. “”We have never seen ourselves as gods who make the rules of social interaction,” said Eyjolfur Gudmundsson, an economics adviser to CCP. “You are able to lose the things you have created. That’s what makes the world interesting.”

A married father of two, Ricdic says that, while he regrets stealing the money, he would do it again in the same situation: “I saw that as an avenue that could be taken, and I decided to skim off the top, you could say, to overcome real life difficulties.”