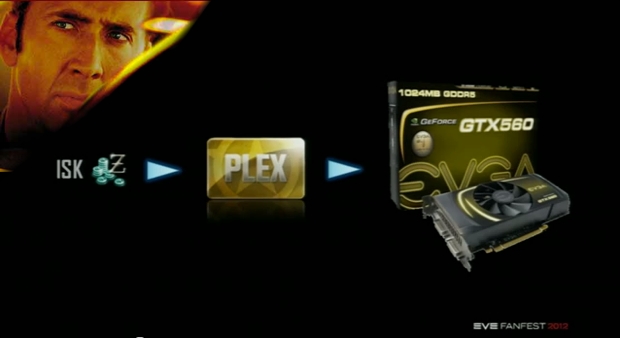 At EVE Fanfest 2012 we told you that players would be allowed to use the game’s PLEX currency to purchase an Nvidia GeForce GTX 560 graphics card. PLEX isn’t exactly in-game currency, but the game’s ISK currency can be exchanged for PLEX, and that could be used to buy a shiny new video card. In this deal, 20 PLEX units would get the user an EVGA card and shipping.

The program exceeded expectations, to say the least. It kicked off on April 13 with 100 available cards, but the supply only lasted 64 seconds! That’s 64 seconds from the first redemption through the last of the stock, meaning that these cards disappeared almost instantly.

I can’t wait until I can buy real dog food with points earned from a dog owner sim like Nintendogs.