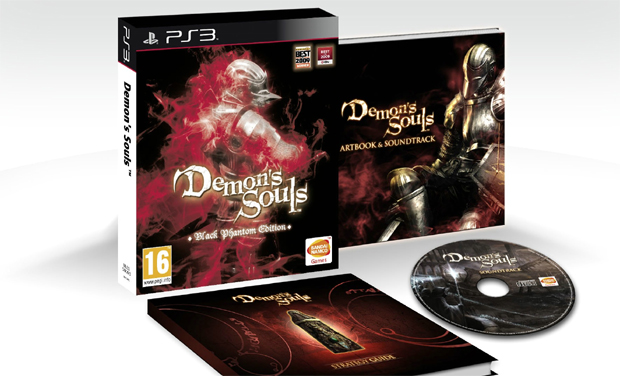 Yesterday, we rejoiced at the news that Demon’s Souls, my personal game of the year for 2009, was on its way to our oft-neglected friends in Europe. As part of the promised official confirmation from publisher Namco-Bandai in a press release today, we now also have been told that it’s going to be a limited special edition.

Called the “Black Phantom Edition,” the package comes with a copy of Demon’s Souls, a hardcover art book, a strategy guide and a soundtrack CD. It’ll be dropping on June 25th. Look at that picture. It’s so, so pretty.

I’m not going to mince words. You want this game. And that’s why I’m going to encourage you to pre-order right now. You need to make somebody take your money for this. They’re calling this a “limited release” for a reason and I would hate for any of you to miss your chance at such a phenomenal title.

LYON, FRANCE – 16 April 2010 – NAMCO BANDAI Partners S.A.S., one of the video game industry’s leading distribution, marketing and sales companies, today announced an agreement with renowned Japanese publisher Sony Computer Entertainment Inc. (SCEI) for the distribution of the acclaimed action RPG title Demon’s Souls across the EMEA and Asia Pacific regions. Following its release in Japan and North America where it garnered high praise from media and a loyal audience of fans, the PlayStation®3 (PS3™) game will be launched on June 25, 2010 as an exclusive European limited edition retail pack containing the soundtrack CD, a new artbook and brand new strategy guide.

“We’re very pleased to be working with SCEI to bring the fantastic Demon’s Souls to gamers outside of Japan and North America,” said Olivier Comte, VP Marketing, Sales & Publishing NAMCO BANDAI Partners S.A.S. “The game is exactly the kind of quality experience with which we are continuing to grow the NAMCO BANDAI Games portfolio of titles, and we will be working hard to ensure it’s at least as much of a success in our markets as it has already proven to be elsewhere.”

Beautiful, compelling, and unforgiving, Demon’s Souls is one of the hardcore RPG experience PS3 owners have been waiting for since the platform’s launch.

Revolutionary online features support your adventure like never before, presenting seamless interconnectivity that serves in every instance to enhance the single-player game. Team up with other players in simultaneous cooperative play, working together to topple some of the game’s colossal bosses, or force your way into the games of skilled players and challenge them to PvP battle.

Leave hints and clues for those who will follow in your footsteps; either intentionally or through your own inadvertent demise, your bloodstains will allow your successors to view a replay of your death, hinting at how to avoid your gruesome fate. Unprecedented in its depth and subtlety, peerless in its relentlessly challenging gameplay, Demon’s Souls is the ultimate action RPG.

UK website Eurogamer.net awarded the title a resounding 9 out of 10 – “absolutely compelling; dark, detailed, unforgiving, creatively cruel,” and adding, “You can learn to love Demon’s Souls like few other games in the world.”

Gamespot awarded the game ‘Game of the Year 2009’ – “Brutally challenging and utterly engrossing, this innovative role-playing game is one of the year’s best.”

Featuring the game, a brand new hardback artbook filled with mesmerizing concept and game art images, a new strategy guide, plus the deeply atmospheric original soundtrack of the game on CD, the limited edition retail pack of Demon’s Souls is coming exclusively to EMEA and Asia Pacific on June 25, 2010, only for PS3. The European limited launch of Demon’s Soul’s can be pre ordered now from Play.com, Game.co.uk, HMV.co.uk and other leading retailers whilst stocks last.

Filed under... #DO WANT#Europe#Role-Playing Games