[Destructoid Europe, lead by mistic, had one of their giant parties a couple weeks ago in their infamous party location ‘Teh Lair’. Read on for a recap of the weekend’s events, and information on their upcoming party this summer! – JRo]

I left my home on Thursday, February 17th, at 8am, after getting up at 6am and loading the car. Made my way to Teh Lair for what would become another legenday NARP. I finally made it there at 10am and started unpacking immediately. Lots of stuff had to be done — our first task was to clear out the chimney which had become blocked with soot from years of use during all our other winter parties… 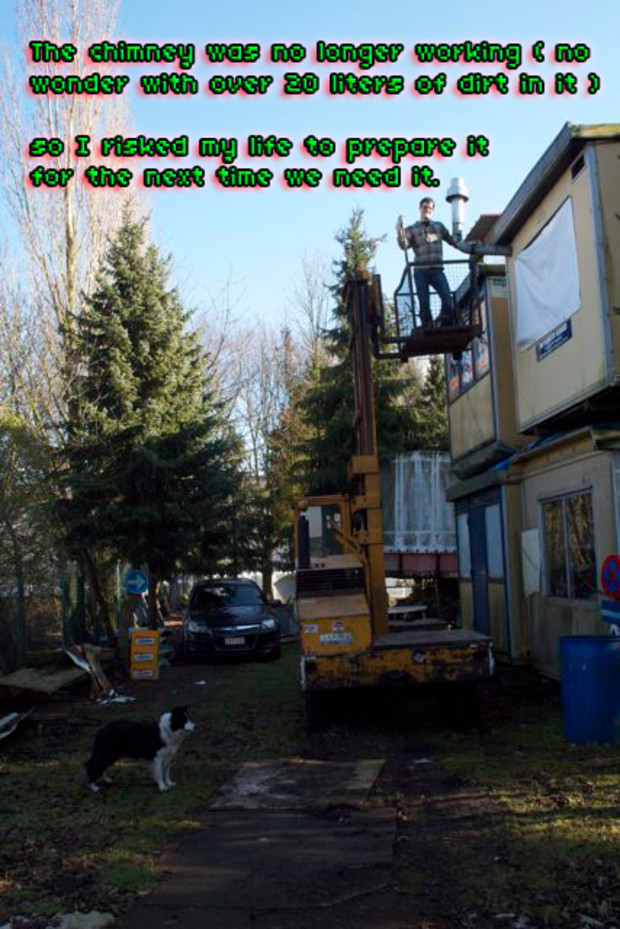 Next I had to completely reorganise the main room to make space for 2 extra seats. This, as always, resulted in a huge mess… 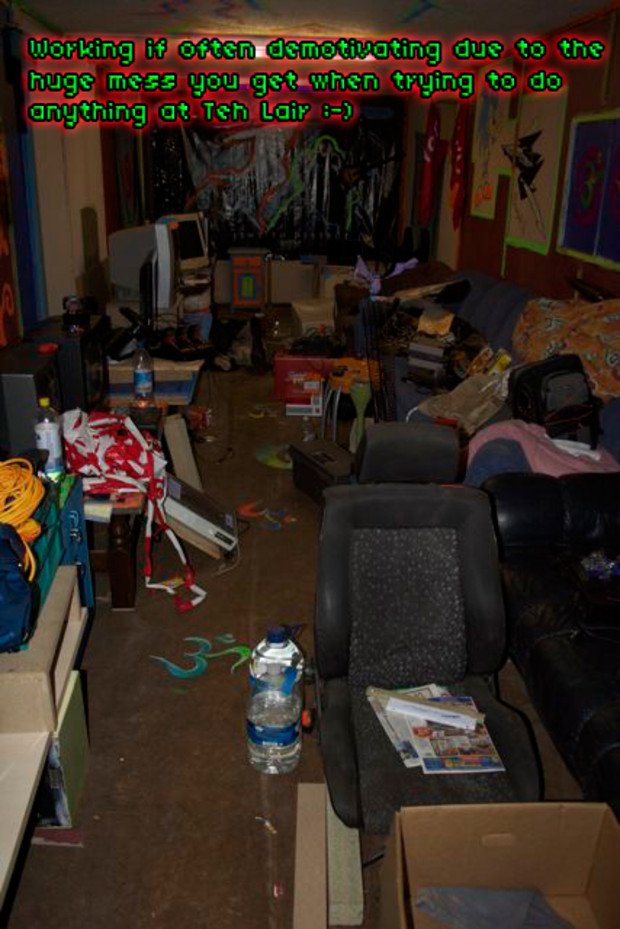 Around 2am in the morning, I called it quits and went to sleep on one of our couches. I got up at 8am again to prepare for the arrival of Po0ky and Rex. We quickly cleared out Po0ky’s car so we could go have breakfast at a local bread-place.

Once back, we flew at our work again – the first guests would be arriving at 6pm with more materials, so we had to be done with our own stuff. Two hours before the start we were good as done, so we decided to fill up the white wall behind the main TV with our new Narped-Logo: 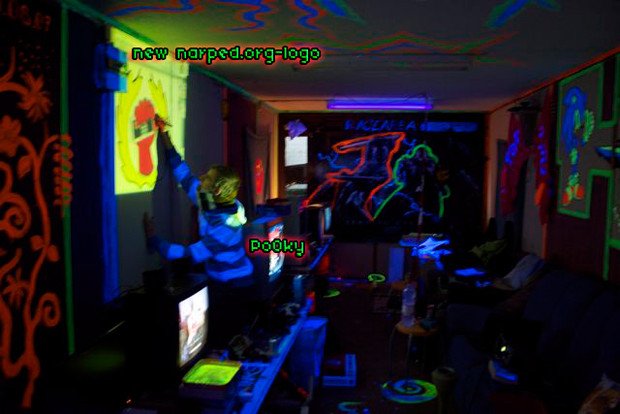 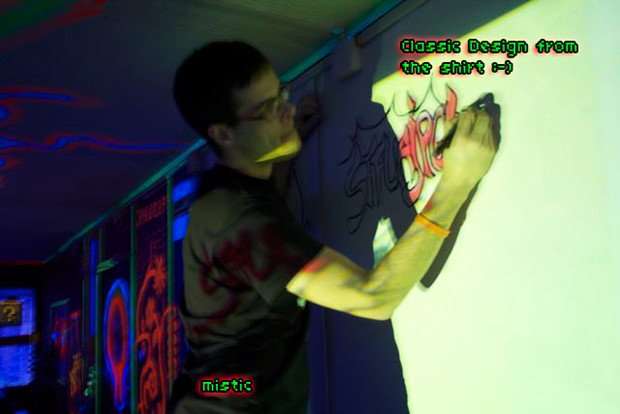 At 6pm we ‘officially’ opened the NARP: 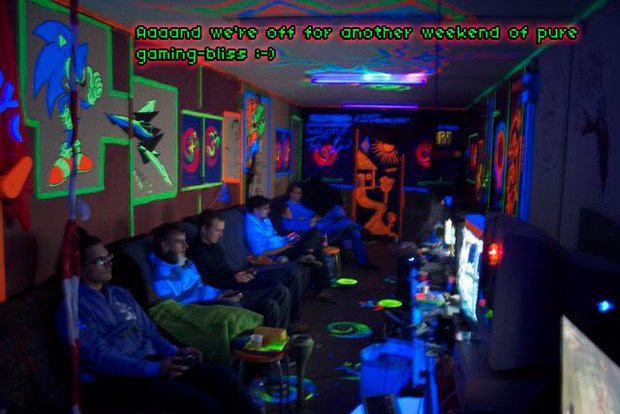 One thing of which I’m quite proud is the sheer amount of systems we always manage to get together. This time we had 11 active TVs/monitors with close to 23 active consoles attached to them in one single room. Thanks to this, we got some cool comparisons going: 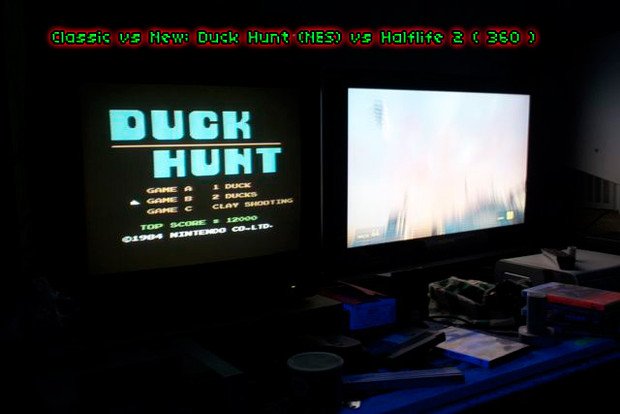 During the years we’ve been doing this, a number of classics have emerged, the most important clearly being “Mashed – Polar Wharf – Chaos Powerups & Airstrikes” on the old Xbox. There is not a single game that even comes close to the mount of playtime this game has gotten over the years, and it NEVER gets old. 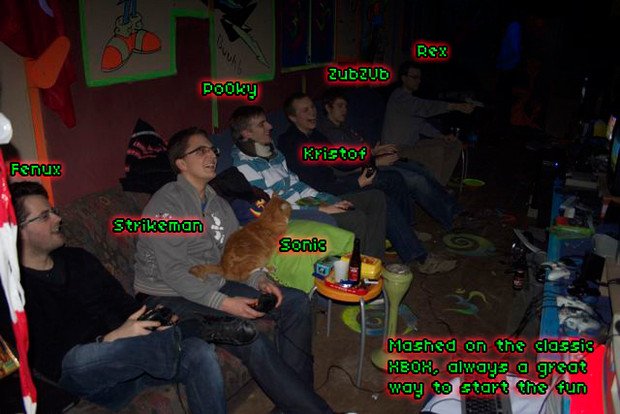 Since we were doing a three day event, we did everything we could to make decent food available for all of our visitors. We had breakfast everyday, and a celebratory dinner on saturday for my birthday. 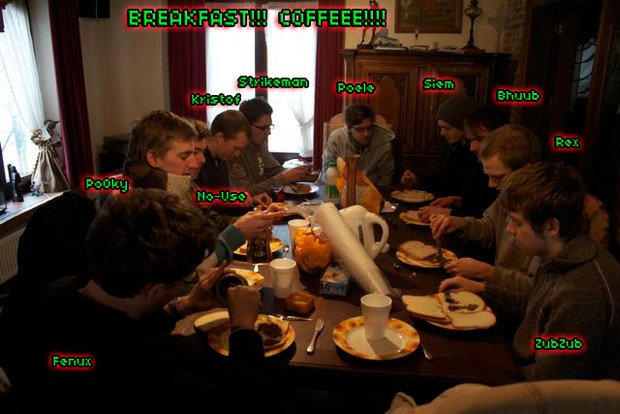 After the breakfast interlude, we threw ourselves at our games again ASAP 🙂 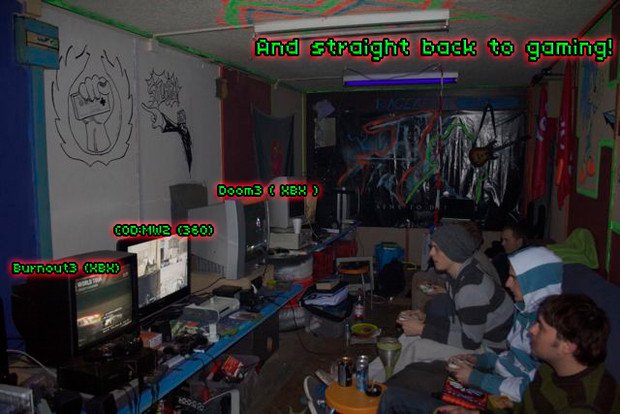 Bhuub playing some Virtua Cop on the SEGA Saturn: 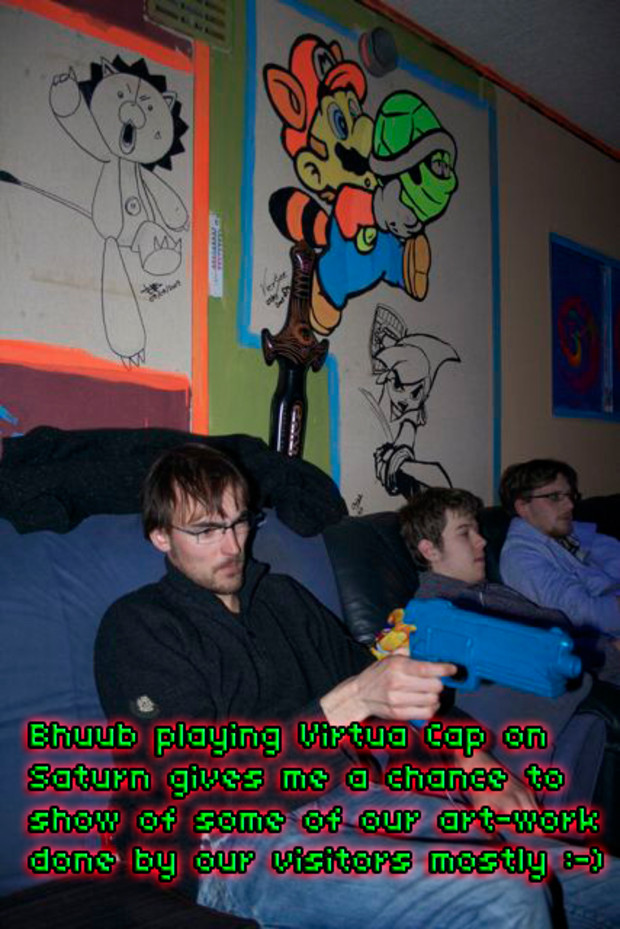 No comments needed for this one (since they’re on the pic): 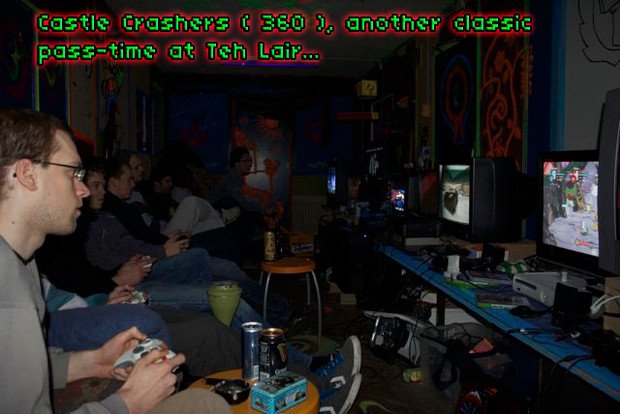 On Saturday after our dinner, Viersee and Smis arrived, bringing along a Fanatec GT3 RS-wheel and RennSport Wheelstand so we could all “test its durability”: 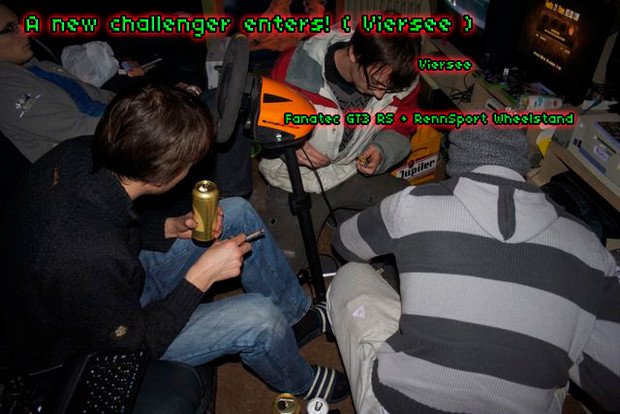 This caused a slight “rift” in the container as the people in the racing-area were playing NFS:HP while the people near the Fanatec-wheel were playing the more ‘serious’ WRC3 🙂 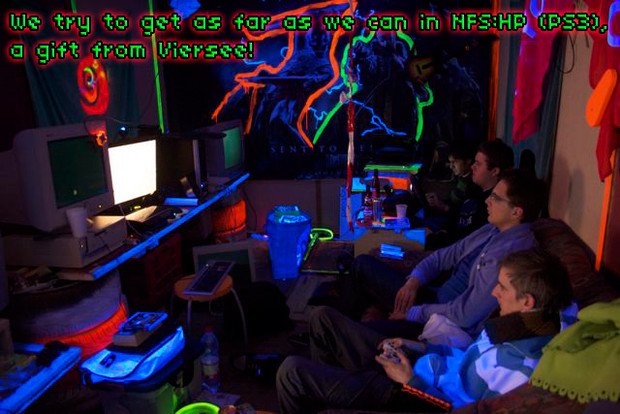 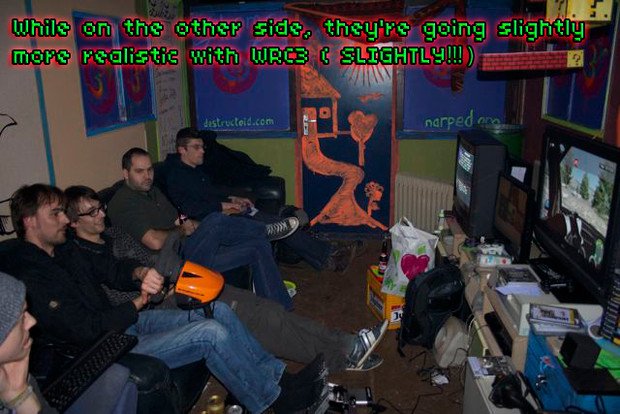 After that the biggest battle of the weekend broke out on the classic XBOX with an all-time-classic, 4vs4 HALO1. We connected the old XBOX’s using SCART-cables to 32″ HDTV’s, which gave a glorious pixel-soup to play in 🙂 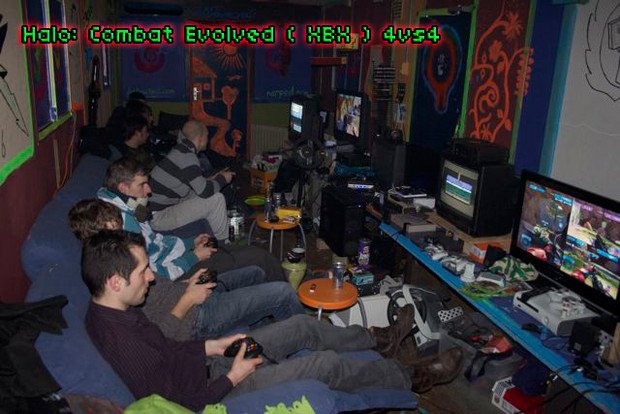 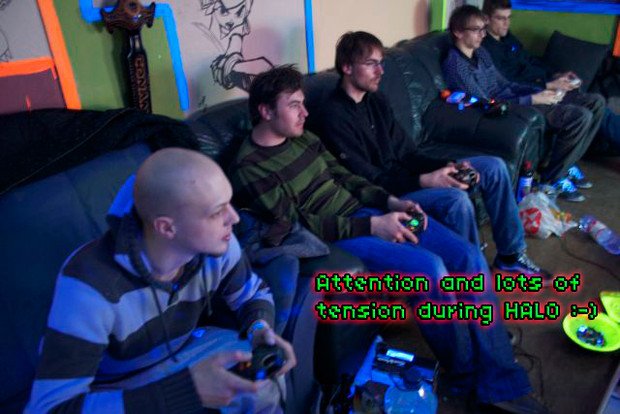 They might’ve been the last to arrive, but they were also the last to stop gaming in the morning: 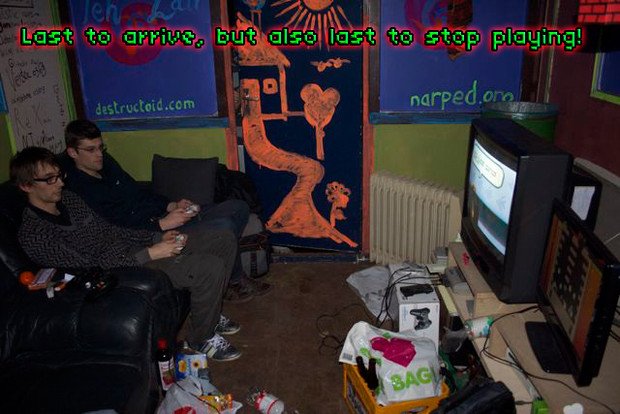 Keep an eye on our Google Group and blog to find out more about EuroNARP4 on the weekend of July 15th, 2011!