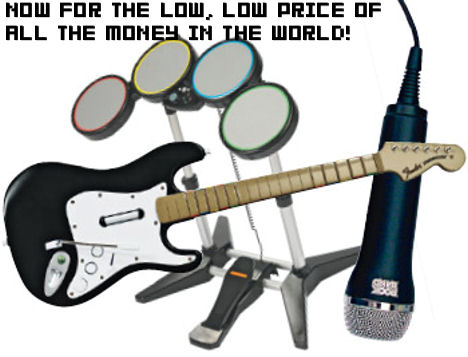 Harmonix may think that we maligned European gamers are getting a good deal when we’re expected to drop £180 for a full Rock Band set, but the people actually selling the games are starting to realize how ridiculous it is to charge more than a Wii for a single videogame and a Singstar microphone.

Play has already sliced £30 off the ‘Band in a Box’ set and sheared a tenner away from the game disc’s asking price, making for a slightly more acceptable total price of £139.99. It’s only slightly acceptable, however, because there is no way in an eternity of Satan’s buggery that I would be caught dead paying £139.99 for a game.