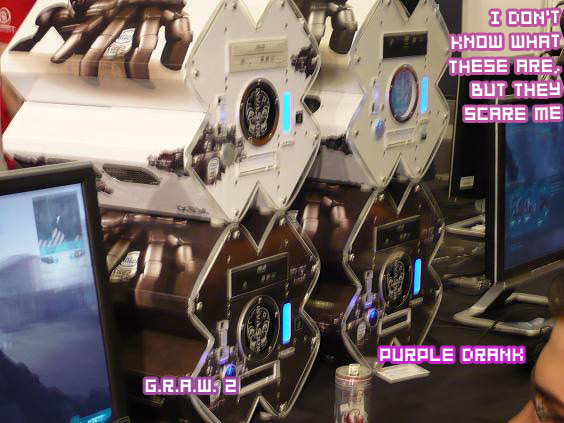 The thing about the 5th Electronic Sports World Cup is that the competetive gaming was actually the least interesting part of the entire event. I’ve been playing video games for the better part of my short life, and professional gaming bores my balls off. Completely off. Think Bobby Brown, but after he meets Freddie. Don’t get me wrong — I have no problems watching athletic feats of prowess, on TV or otherwise. I just can’t seem to get into watching people frag each other.

Thankfully for me, there were some other relatively interesting things popping up here and there to keep me busy. Hit the jump to find out what was cool, what wasn’t, and why Turrican II was way more engrossing that Counter-Strike.

First thing’s first: this was a competition with winners and prize money. Here are the results:

Notes to self: Never play against a Pole in an FPS; of course South Korea won the Warcraft tournament; like soccer, Counter-Strike seems to be something that American women do better than American men.

As I mentioned earlier, the indie development section of the ESWC floor entertained me. Here was the only place that people seemed friendly and approachable. I realize that they’re probably grasping at straws to get as much positive press as possible, but I’m willing to admit that my attention can be bought. I’d much rather talk about some tiny company’s vaporware that have the Ubisoft goons scowl at me as I watch the same old G.R.A.W 2 footage, especially if you’re nice and have stickers.

Also extremely cool was the retro gaming section, provided by Intel and MO5.com, a videogame and technology museum and research institution. I’d rather play Turrican II on an Amiga 600 than watch a Crysis video we’ve had since January. Or better yet, do my own fragging with Doom and Half-Life, courtesy of Intel Pentiums I and III. Here’s a quick rundown of the retro goodness:

While the indie and retro sections were great, the rest of the games at the event felt kind of tacked on. Here’s what I figure the conversation sounded like, but in French:

“Oh shit, we’re going to need something for people to actually do here!”

“I know, why don’t we just set up a handful of booths with slightly-stale games from a few months ago in them? We could put them on the perimeter, completely out of the way. What about that one game? Y’know, with the tits? Dead or Alive or something?

The problem is that ESWC, and I suspect professional gaming in general, is too insular. Here, we have an event featuring professional gaming, and the biggest displays (aside from the competition itself) are selling professional-gaming equipment. No, SteelSeries, I certainly will not spend $60 on a mousepad, and Logitech, I definitely don’t need your keyboard to tell me my Counter-Strike stats — I’m not a professional gamer! I realize that I’m not the target market, but neither were everyone else at the event. It’d be like going to a football game and, instead of foam fingers, the only thing in the gift shop are steroids and shoulder pads.

Moving on, here are some snippets and observations that I managed to make:

The free energy drinks taste like all other energy drinks: bad. They are, however, cold, an invaluable adjective in a gaming convention. Any time you get a bunch of people in one room with a bunch of massive gaming rigs, it gets hot. And sweaty. And gross.

France has chavs too.

The booth babe (I use that term liberally. She was attractive, yet fully dressed.) is being payed to talk to you, but no amount of money will ever mask the deadness in her eyes, especially when you start waxing philosphic about Rayman. Dearest Dtoiders, don’t be that guy.

I realize that this post seems overly negative. Don’t get me wrong: the event was entertaining and interesting, but I just never really got into the whole pro gaming thing. Which is, y’know, why I was there. But, what do you guys think? Professional gaming: yay or nay? Crysis or Turrican? Paper or plastic?

In any case, hit the gallery for a few shots, and don’t forget to check out the rest of the coverage.