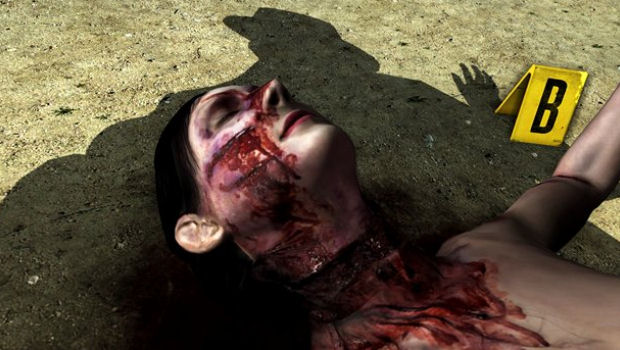 It’s yet again time for my favorite kind of post — ESRB rating summaries! The Entertainment Software Rating Board has finally tackled Rockstar’s L.A. Noire, and as you’d expect from a Rockstar game, the details are tasty, to say the least.

Like always, the ESRB has gone through the violent and sexual content in clinical detail, revealing some hot details. There’s tons of violence, with blood spurts and “realistic” gunfights. Plenty of nudity as well, but perhaps not the best kind, considering it’s mostly mutilated murder victims with their clothes off. There is pubic hair on them, though … so I guess that’s it’s a trade-off.

There’s also plenty of foul language, include some pretty heavy racial terms that would be quite fitting for the game’s 50’s setting. They’d get me fired if I reproduced them here though, so check out the full ESRB summary below for the censored versions.

This is an ‘open-world’ action-adventure game in which players assume the role of Cole Phelps, a rookie detective on a mission to stop a deranged serial killer. Set in late 1940s Los Angeles, the game allows players to advance through various ‘desks’ at a police department (i.e., Patrol, Traffic Squad, Homicide, Vice, Arson) by interviewing witnesses and suspects, searching crime scenes for clues, and apprehending criminals.

Players use pistols, rifles, machine guns, and flamethrowers to engage in firefights with various enemies — these shootouts are highlighted by realistic gunfire, cries of pain, and blood spurts that stain injured characters and the surrounding environment. Cutscenes also depict instances of violence, including a character being beaten with a crowbar (off screen)—large spurts of blood are depicted in the foreground.

During the course of the game, players may come across crime scenes in which badly beaten or mutilated corpses are subject to investigation; players are able to examine victims’ bodies close-up, surveying various bruises and bloody cuts for evidence — a few female corpses are depicted fully nude with fleeting images of pubic hair.

Investigations sometimes pertain to sexual assault crimes, and details are often conveyed in clinical terms through dialogue or on-screen text (e.g., ‘He’s some kind of sex fiend,’ ‘Woman’s briefs torn at seams, forcibly removed,’ and ‘Head trauma . . . external bruising to genitals.’). In one cutscene, there is an implication that a character is engaged in a sexual relationship with a teenager (e.g., ‘You take love where you can find it as you get older, Jack’/That has nothing to do with love . . .’). Some sequences allow players to collect/manipulate drug-related evidence such as marijuana packets, morphine syringes, or amphetamine pills; in one cutscene, a doctor can be seen injecting a character with morphine.