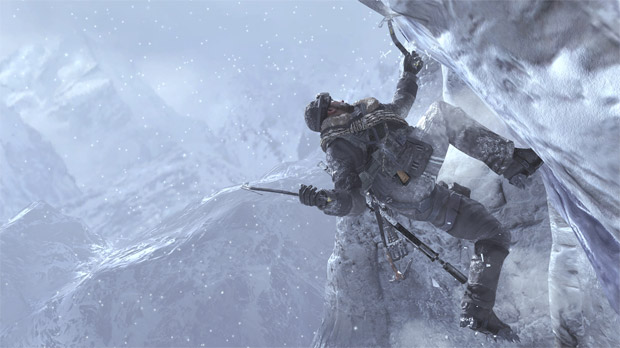 Our prior coverage of the ESRB’s game descriptions has always included praise for the often hilarious write-ups, and I’m not about to stop the trend. While the Modern Warfare 2 description may not be funny, it is insightful, and of course mentions the infamous airport sequence. Spoilers follow, obviously.

“Players defend the U.S. from Russian armed forces, engage in skirmishes and combat missions, and track the ultranationalist in an attempt to discover his true motivations and co-conspirators,” states the ESRB.

“Realistic gunfire, explosions, and cries of pain are heard during the frequent and fast-paced combat. The most intense depiction of violence occurs during a ‘No Russian’ mission where players take on the role of an undercover Ranger: Several civilians are gunned down at an airport as players are given a choice to participate in the killings (e.g., players can shoot a wounded civilian that is crawling on the ground), or walk by and observe without opening fire.”

Continuing: “In either case, civilians scream and emit pools of blood as they are shot to death. Within the multiplayer portion of the game, players can unlock “emblems” to be used on their player name cards. Some of these emblems contain images that reference drugs (e.g., a cannabis leaf; a name card with a depiction of a joint).”

It’s all noted that harsh language is used, with “motherf**ker” listed as an example. I don’t remember the previous game delving into that territory so much, but I guess the whole “No Russian” mission is proof enough that times have changed.

Filed under... #Call of Duty#ESRB#Infinity Ward