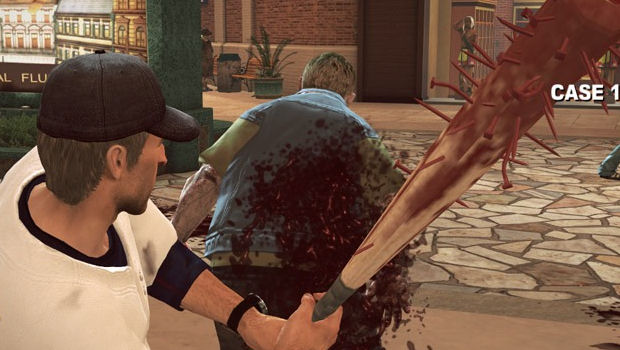 It’s been a while since I got to feature a lovely ESRB rating, so here’s one for Dead Rising 2. That ever-so vigilant board of electronic software rating has cast a critical eye over Capcom’s upcoming zombie grinder, and has let us know that it contains chainsawed priests, chunks of human flesh, and skin tight leather.

This is an action-horror game in which players assume the role of Chuck Greene, an unwitting contestant on a “kill-or-be-killed” zombie game show. Players can use guns, swords, chainsaws, or flamethrowers to kill the myriad zombies and scattered humans. Large sprays of blood frequently occur and zombies frequently get dismembered and decapitated; for example, players are able to ride a motorcycle through mobs of zombies, sawing off multiple body parts. Cutscenes include the following depictions: zombies that rip chunks of flesh off humans; a man whose blood is churned out of him by an impaled spinning blade; and a man who drills a chainsaw into a priest’s chest. Some female characters are dressed in revealing outfits (e.g., skin-tight leather, lingerie, showgirl costumes), and players can enter a “Peep Show” or receive a “Peeping Tom” bonus. Some missions involve making, serving, and drinking alcoholic beverages (e.g., wine, vodka, and whiskey); if players drink too much alcohol, their movements may become erratic and they may vomit. The dialogue includes language such as “sh*t” and “b*tch.”

Every ESRB rating should just be quoted in game commercials, since they do a better job of selling these games than any PR mouthpiece could. Dead Rising 2 will be out on September 28. Hey, that’s not too far!