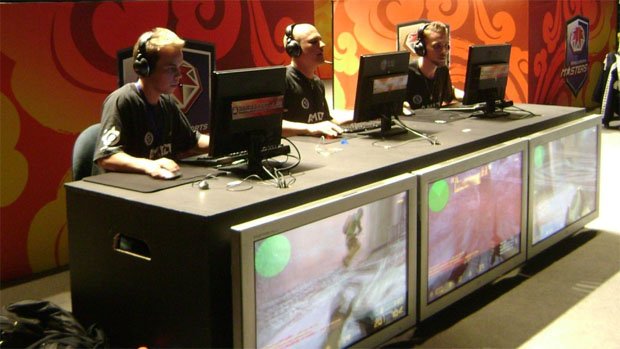 [Today’s promoted blog on the topic of eSports is from Elsa, who argues that games aren’t sports, and don’t need to be classified as such to be legitimate. If you want to see your blog on the front page, make sure you write a CBlog on our current topic, East vs. West. — JRo]

I’ve caught a few episodes of “Major League Gaming” on G4TV and it got me wondering if gaming could legitimately be called a “sport.” I guess this is an old issue, but I remember a few years ago where the GGL (Global Gaming League) had actually tried to get videogaming into the 2008 China Olympic games as a demonstration sport. They were unsuccessful, but they argued that recognized sports such as golf relied more on hand/eye coordination and skill rather than athletics, and they also pointed to the fact that bridge, chess, bowling, and billiards were recognized by the Olympic committee as legitimate “sports.”

I think most would agree that videogaming often requires an equivalent amount of teamwork, skill and strategy to the “sports” such as those mentioned above, and a few could even say that videogames such as DDR require physical exertion, artistic flair and skill — like other more classic sports such as gymnastics. That being said, I personally don’t think that bridge, chess, billiards, or videogames are actually sports. They are GAMES. Call them e-sports, or v-sports, or even “intellectual sports” (a phrase often found when talking about bridge or chess as sport) if you must, but they are not actually sports. Sport requires physical fitness and physical training, and I think that this is the dividing line between “sports” and “games. Sports contain a very real element of danger, that someone could be physically hurt or injured and somehow the mental agony of being teabagged just doesn’t measure up.

Professional sports are also often big money. People will pay money to go to an event to watch physical competition. Apparently as a society we find it entertaining to watch two men beating each other up, or large groups of men or women chasing a ball or a puck around an enclosed area. Part of the attraction to this is the fact that an injury could occur — these are the “ahhh” moments in sports. I don’t know that masses of people would be willing to pay hundreds of dollars to go see a gaming event — it simply lacks that physical sense of danger. Lots of people will watch if the viewing is free but really, honestly, would they pay money to attend?

The other thing is, everyone knows the rules in sports. One of the problems with videogames as either a sport or even as entertainment is that the rules vary from game to game. Virtual sport games such as football or racing tend to borrow the established rules of their real-life counterparts. But then there are also fighting games, shooters, and RTS games — each with their own environment and rules. There are so many genres of videogames that it makes it difficult to offer them as a viable form of entertainment. There is no game that has arisen to international level as “THE competitive videogame” where everyone knows the game and knows the rules. In Korea, StarCraft might be that game, but in North America it might be Halo. Even StarCraft and Halo change too quickly for the casual observer to become interested because there are new editions that come out every few years. There is even the difficulty of viewing the event in that each player of a videogame has their own individual perspective and the entire “game” can’t easily be viewed by an audience.

Videogames will likely never become as popular as true sports, very simply because they are not a sport — they are a GAME. In my parent’s era, they played billiards, darts, bowling, poker, bridge or Canasta. There was both a social and a competitive element. Today, people play videogames. Just as billiards, poker and bowling have all been televised, so too may gaming be televised, but it will never be the same as actual sporting events and because of the different genres involved. Gaming will, to some degree, always be a niche form of televised entertainment, unlikely to appeal to the broader masses.

That being said, competitive gaming will continue to evolve and increasingly it will likely be broadcast in some form. That form may not be on your TV, but maybe on your computer, your PS3 or your Xbox as a livestream. It may occasionally make a TV appearance, but will likely be relegated to the 2AM time slots previously occupied by poker, bowling and billiard events.

Gaming is gaming. Get over it. There is no need for gaming to be “sports” and the people that play games professionally are not “cyber athletes.” They are gamers. Period. And there is absolutely nothing wrong with that.

[The blog author apologizes profusely for the use of the previous header picture and any offense it may have caused.]