Hey, Destructoid Folks. I work for MLG, mentioned in Elsa’s recent blog about eSports, and thought I’d offer another viewpoint on the ongoing discussion of competitive gaming and its place in gaming as a whole. In the interest of full disclosure, I’m going to repeat that in bold, with caps:

I WORK FOR MLG. I AM THE FURTHEST THING FROM AN UNBIASED OR OBJECTIVE OBSERVER ON THIS TOPIC THAT YOU CAN FIND. MY INTENTION IS TO PROVIDE ANOTHER VIEWPOINT ON THIS DISCUSSION. FURTHERMORE, MY OPINIONS ARE MY OWN AND I HAVE NOT BEEN ASKED BY MLG TO WRITE THIS.

There. Now, Elsa had a lot to say about the idea of gaming as a sport, and I have no intention of going point by point through her blog. The long and the short of it is: the post bothers a lot of people in the eSports community, and there are good reasons why, but I don’t think what Elsa said is really that much of a problem. Ultimately, a lot of people saw the blog as a casual dismissal of a movement that’s important to them by someone who doesn’t know much about it. And they’re right. That’s what it is. It is someone who doesn’t know a lot about competitive gaming explaining why it doesn’t hold her interest, and why she doesn’t think it has a lot to offer a potential audience.

And that’s all anyone can ask of her, or anyone else who feels the way she does. We talk a lot about growing eSports, but to do that we have to recognize that the greatest barrier to that growth is failing to listen to the very people who don’t get it… yet. In good faith, Elsa told us what this insane, unbelievably complex, and at times forbiddingly dense institution we’ve created looks like to her. It’s time we put our money where our mouths are, as eSports devotees. So, in equally good faith, please allow me to explain what my perspective is on this whole “are eSports really sports” discussion, as someone who works with it daily. 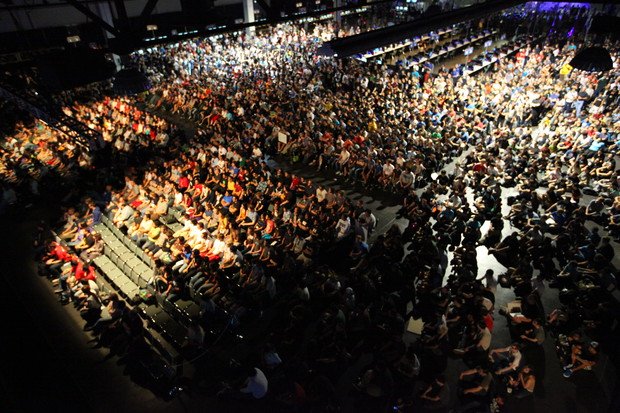 An old teacher of mine used to say, “dictionaries come after language,” meaning that our language changes, and we only learn to define the words we use after we’re already using them. Before everyone falls the fuck asleep, don’t worry — this isn’t going to be a discussion of semantics. The point is, language is mutable, and our understanding of even a common word will change as we come to think of it differently. Whether we define sports as strenuous physical activity or something closer to competitive gameplay will all become moot as the term shifts and flows with the tides of public perception. Right now, I don’t care if the word sport means something that excludes gaming or not. Fuck the traditional definition. What I know is that the competitive gaming community has come to love the term eSports and use it as a rallying cry. It has united us under a convenient and easily-understood banner. There was never a joint decision to give this thing a name and stick to it, and in truth many of us don’t like or use the word eSports. But here is what I do know and care about: thousands of kids screaming for their favorite player. Thousands of kids sitting on dirty carpeting because there aren’t enough chairs and writing all over various forums about how they felt while watching an epic match. A young player who’d never played in North America before brought nearly to tears by thousands of fans he never even knew he had chanting his name after a win. That experience, the skill and the spectacle and the emotion of it — that’s what many of us are now calling eSports.

The idea that what we’re doing is a sport has organically taken shape among us. Not everyone that works or plays in this industry feels this way, but the idea is there and people are latching onto it. Under that banner, we’ve come to believe in the legitimacy of what too many people think of as a childish pastime that grown men and women should have left behind. We’ve seen nerds become heroes, nobodies develop fans, and gaming gradually take hold in the general consciousness as something more than just dicking around in your living room. We have seen and experienced this phenomenon as it has developed, and we are immensely proud of what we’ve seen happen around us. This is why dismissing all of this as unworkable, illegitimate or somehow marginal is so frustrating, especially from fellow gamers.

I submit that the outcry from gamers who don’t yet (and may never) follow eSports, the belief that competitive gaming is not a sport, is, in its way, an attempt to give the type of gaming that they do legitimacy as an adult activity worthy of people’s attention and admiration. The idea that eSports is somehow separate from what the rest of us just call gaming might feel clique-ish sometimes, as though competitive gamers are trying to distance themselves from the gaming community at large by associating themselves with more typical athletes and sports celebrities. When Elsa, and the other people who have made similar arguments, say “There is no need for gaming to be ‘sports’ and the people that play games professionally are not ‘cyber athletes.’ They are gamers. Period. And there is absolutely nothing wrong with that,” that seems to me to be saying “Hey, you don’t have to distance yourselves from the rest of us. Why are you trying to make yourself out to be something you’re not? Being a gamer is awesome. What.”

Hear, hear. Being a gamer is awesome. Which is why it is my pleasure to announce that no eSports competitor, competitive gamer, MLG Pro, or ambitious amateur would ever tell you that they are not a gamer. They also would not tell you that they are a “cyber athlete,” may that miserable collection of syllables rot in whatever circle of hell is reserved for foolish and unwieldy nomenclature.

Because the idea of gaming as a sport isn’t about being like the cool kids, the millionaire athletes, and the jocks. It’s not about the physical demands associated with standard sports. It’s not about separating yourself from noncompetitive gamers, and it’s not about trying to be more than gaming can make you. It’s about recognizing what gaming can mean. For those of us who love our competitive natures, gaming can be every bit as engrossing and meaningful as baseball is to baseball fans, and as lacrosse is to heathen mongrels who will never be loved. We don’t think of this as a sport because we’re industry professionals or insiders. We (and by “we” I mean “hundreds and hundreds of thousands of people around the world”) think of this as a sport because we’re fans. Because we’re fans of the game and we’re fans of the players. Because even the players are (with some notorious exceptions) fans of all the other players. Because when we realized that you can now go to certain bars and watch StarCraft 2 matches the way people go to sports bars to watch football or curling or what have you, we practically broke our legs running to the nearest Barcraft location to join in. Because even those of us who love traditional sports love this just as much, and those of us for whom traditional sports held no appeal have now found a world that offers us just as much joy. So it’s only natural, and frankly inevitable, that we as a community would – organically – take the term that we associate with competitive fandom and joyfully claim it for ourselves. Yes, we love this sport. We have this, now, where we didn’t always. Halle-fuckin-lujah.

We love single player gaming as much as any other gamer does. We would never want to distance ourselves from it. We all skipped work the day Portal 2 came out, just like you did. As a community, we agree on nothing except this: we believe that we are contributing something amazing to gaming. Something that makes this unique and limitlessly expressive thing we all love a little bit better – not by improving what it means to be a gamer, but by expanding on it. We’re not better than gamers, and we’re certainly not different from gamers. We are gamers. We are all on the same side, and there’s room here for all of us.

So on behalf of MLG, TSL, NASL, IPL, GSL, OSL, MSL, WCG, Gotfrag, The EG Master Series, Halo50k, Quakecon, EVO, Blizzcon, Dreamhack, Gamescom, every other league or series I’ve neglected to mention and every kid running a local LAN, allow me to say “Welcome to gaming. Gaming as a live event. Gaming as online tournament. Gaming as shared experience, in awe of human potential. Yes, Gaming as a sport. Welcome to gaming our way.”