[Our first promoted blog for last week’s eSports topic is from I Palindrome I who, like many of this week’s respondents, talked about EVO. Promotions will happen this entire week — if you want to see your blog on the front page, make sure you write a CBlog on our current topic, East vs. West. — JRo]

In order to answer the question “Can video games work as a spectator sport?” we must first look at the criteria for what makes for good, watchable material. However, I will tell you right now that I would answer that question with a resounding “yes!”

If you properly read the title, then you will know that the main focus of this blog will be the EVO championship series, meaning that I will be mentioning fighting games only. If you watched this year’s EVO, whether you were at the event yourself or tuned in to streams/YouTube recordings, you know that the crowd had all the hype that you would see at a regular sporting event. I think that alone is good enough to prove the entertainment value to a spectator, but I would like to take a closer look, comparing the norm of “real” sports to the virtual realm of fighting games.

Most televised sports (save golf) are fast-paced and intense. Some of the more popular sports (American football, hockey, soccer, NASCAR, boxing, MMA, wrestling, etc.) can get pretty violent. I won’t assume that all people that watch those sports enjoy them for the savageness and brutality alone (although that’s hard to say for fighting sports), but it is certainly a factor that influences the aforementioned intensity.

Most fighting games are rather fast-paced and visceral as well. Games like Mortal Kombat, Super Street Fighter IV: Arcade Edition, Marvel vs Capcom 3, BlazBlue: Continuum Shift II, and Tekken 6 are very colorful, feature full-contact battles, and have their own unique feel to them despite being in the same genre. However, this does bring up a point that cannot be ignored about the nature of fighting games: both the arena and the fighters themselves are a product. When I say the fighters are a product, I am, of course, referring to the characters in the game who have preset moves and stats. They have a set amount to their abilities that cannot be changed via exercise or training. 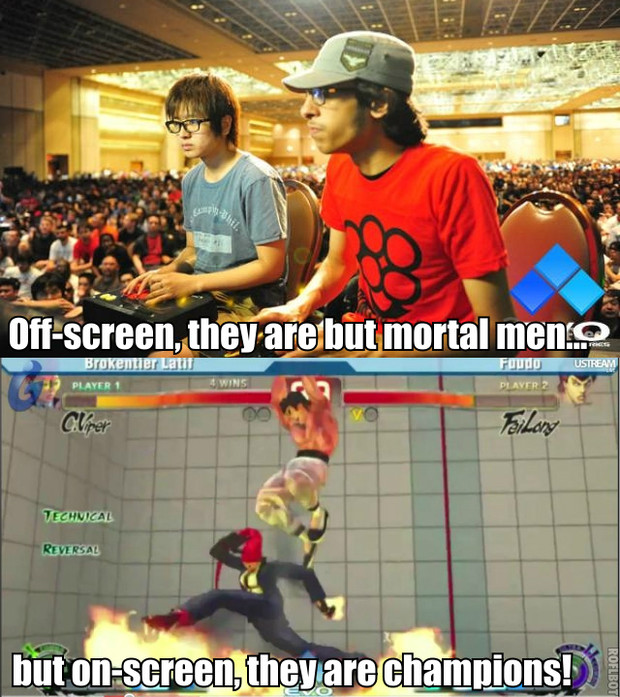 This creates a phenomenon not seen in other sports. The competitors must work around the virtual constraints of their chosen avatar. Unlike a conventional sport where players must maintain their physical condition, fighting game players must assume the identity of their character and use strategy to win. That’s not to say that sports don’t employ strategy, rather fighting games use strategy exclusively. The training a fighting game player undergoes is less about physical condition and more about timing to get combos down correctly and testing out the tools their character has. This is also enhanced by the fact that fighting games nowadays have new iterations/patches very frequently, meaning that gameplay and strategy is kept fresh due to game mechanic and character changes.

Within this phenomenon, there becomes an advantage: anyone can be a competitor. I know that sounds like your typical, motivational speech “you-can-be-anything” dribble, but before you think that, consider the fact that an 8-year-old competed and placed highly in MvC3 this year at EVO. I can’t stress enough that you need to see it to believe it. The other good advantage is that competitor injury is not a factor. Poongko may have bodied Daigo, but the scars are only emotional, no health insurance required.

Yes, eSports have their big, recognizable names as well. Poongko, Daigo, Justin Wong, Tokido, Mike Ross, Floe, Marn, FlashMetroid, Chris Hu, Alex Valle, and Combofiend just to name a few. As well as this similarity with physical sports, fighting game tournaments have sponsorship/advertising. The great thing about the sponsorship is that the people who make the games and gear often sponsor the tournament. Among this year’s sponsors for EVO were Capcom, Atlus, Bandai-Namco, Mad Catz, Brokentier (shirts), THQ, Galaxy4Gamers, and Focus Fire. Hell, fighting games even have their own commentators with the same amount of hype you would see in MMA or Wrestling.

One question should be on your mind at this point: “If fighting games have all of the tools and similarities to other viable sports, why don’t they have as large of a following?” Part of that is because video games themselves didn’t exist until the 1980’s. Other sports have much more of a foundation throughout history, wrestling itself having origins as far back as B.C.E. times. Video games didn’t become really prominent and culturally relevant until recently. Even then, that’s thanks to iOS titles, facebook, and the Wii bringing aboard the casual audience. Fighting games are generally very technical (in advanced play, at least) and not the most popular genre, so this hinders it somewhat.

This technical play, however, creates one last uniqueness seen in fighting games as an eSport: the majority of the audience is active in the community in some way. This can mean that they do something as simple as play at least one major fighting game casually to something as complex as running an online tournament service or providing merchandise. If you think fans of physical sports are extreme in devotion, consider the actions of certain community members like Goryus, the producer of Third Strike: Online Editon, or Mike Z of the upcoming game Skullgirls. This, to me, is one of the most heart-warming things about being part of the fighting game community. Although there is some showboating, the overall good sportsmanship in fighting games is rather refreshing.

So what does the future hold? It’s hard to tell, really. As a BlazBlue player, I’m glad to know that yesterday, August 2nd, marked the peak of user activity on Dustloop, the unofficial BlazBlue forums. I’ll let you decide whether or not that’s because BlazBlue finally became a major/featured tournament at EVO this past weekend, but I’m rather optimistic about the possible influx of players that might be brought into the community. I showed the Daigo vs Poongko video to a friend of mine, and he doesn’t even like fighting games, yet he enjoyed it and understood the hype.

I hope this bodes well for the future. Perhaps this might be the next step to games gaining respect as a whole; as works of art, as mediums for competition, and as culturally relevant pastimes. Remember to do your part to spread the community, even if it’s just one person or if they would rather watch than play.

As always, thank you for reading.

(If you guys want to try and get into the fighting game genre, you should check out Wonderful World. It’s a completely free indie/doujin fighter that’s pretty cool and has somewhat of a player base. If you want to find out more about it, check out it’s page on the Mizuumi Wiki.)