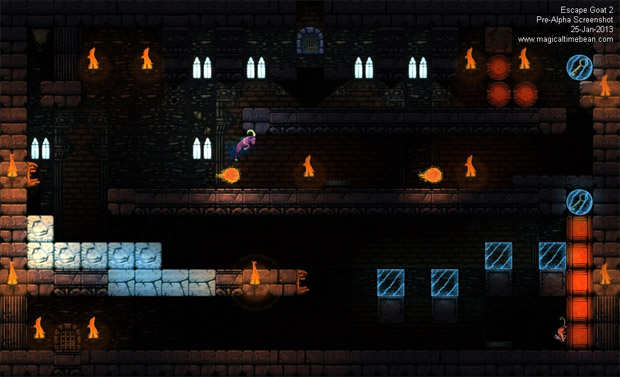 When you find a gem of a title on the Xbox Live Indie Games platform and it doesn’t heavily feature Avatars or have some manner of crafting (all but guaranteeing a spot on the best-sellers list), the first thing you want to see is if it’s available on other services and has picked up the ensuing sales. Escape Goat was one such title that impressed, made the transition to PC, and has apparently been successful — enough to get a proper sequel, at any rate.

Breaking news of Escape Goat 2, Indie Statik has chatted with MagicalTimeBean’s Ian Stocker, who confirms that “the basic gameplay is the same: single screens, puzzle platforming. There will be some changes to how you progress through the game, though it will remain similar to the hub-and-stage system of Escape Goat 1.”

Even in the above pre-alpha screenshot, the game looks like it is packing significantly improved visuals over its predecessor’s old-school aesthetic. Stocker explains: “…that’s where the bulk of the programming work is being spent right now. For the first time in my indie career I’m working with an artist: Randy O’Connor (known for his work with TigerStyle, and a fellow East Bay resident).”

Also of note, an integrated system for user-made levels is under consideration, though nothing has been decided yet. “It’s possible that it will be added after launch if I don’t have time to get it into version 1.0,” says Stocker. That’s something most of us would love to see, I’d wager.