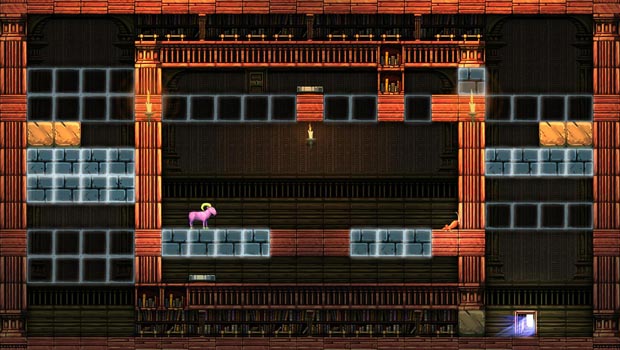 New details and screenshots for the upcoming PC title

While the unique puzzles and platforming featured in the original Escape Goat made me a fan, the new map system being introduced in Escape Goat 2 immediately had me thinking of the 2D handheld Castlevania games. Rooms are now sequentially linked to one another, with certain rooms having multiple exits. You may not be able to access an alternate exit the first time you encounter a room, so the mapping system will allow you to easily backtrack once you acquire whatever it is you need to open the previously inaccessible exit.

After seeing the game at E3 last week, I have to say that development seems to be progressing nicely since its early stages at GDC earlier this year. The visual style is greatly improved as you can see from the detailed backgrounds in the above screenshot, and the addition of new gameplay gimmicks like disappearing blocks and surface physics should make for a great experience when the game hits PCs this summer.

Did you have the opportunity to enjoy the first Escape Goat? Will you be joining this purple goat on its second adventure?