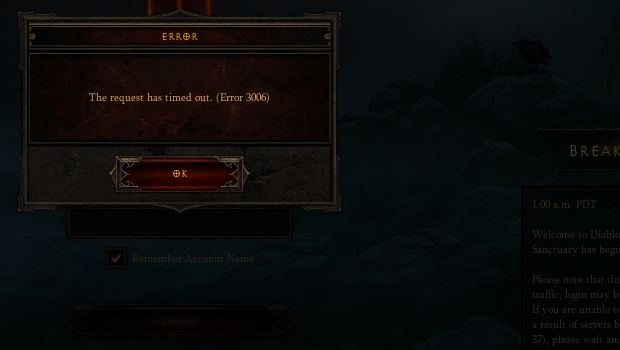 Let’s all try to act really surprised! Diablo III‘s always-online requirement has caused problems for a significant number of folk who bought the game today and tried to log in. The “Error 37” that Blizzard warned us about has done exactly what any idiot could have guessed it would — it’s pissing people off.

Additionally, Blizzard has said it’s aware of the character creation issues that some users are experiencing. Those that made a character and then logged out might have accidentally maxed out all their character slots, though logging out and logging in again may resolve it.

Further error messages include 3005 and 3006, which may occur while playing. Blizzard’s solution is to just try again. Those hit with 14009 and 315300 errors, however, are being asked to create a new Windows user account with admin powers before trying again. A more desirable fix is being looked into.

One potential game-breaker involves an unstoppable 3006 error after meeting the Templar and giving him a shield. Users have been logged out and found themselves unable to get back into their Battle.net accounts. The issue seems to be hitting Demon Hunter players specifically, and it’s advised that no gear is traded to the Templar until after he’s accepted as a follower.

I’ve been able to log in and play this morning without much fuss, but be warned that these problems are there, and the best you can do right now is just keep trying. Videogames, my friends. Videogames.