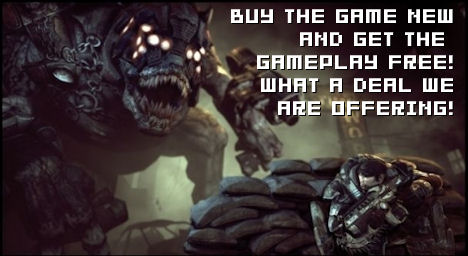 The games industry continues to complain about second-hand games, and this time Epic Games man Michael Capps has chipped in to reiterate how big an issue this is for people that like money. Capps suggests the industry will take steps to combat this problem, bringing up the dodgy use of DLC as a honeytrap.

“I think DLC will be increasing in scope just because in the US we really need to make strides against the second-hand market,” explains Capps. “The secondary market is a huge issue in the United States. Our primary retailer makes the majority of its money off of secondary sales, and so you’re starting to see games taking proactive steps toward that by… if you buy the retail version you get the unlock code.”

See, now while I believe DLC incentives are actually a good idea if they are true rewards, the idea of deliberately crippling a game and including DLC as a means of completion rather than enhancement is lazy and disgusting. What Capps is suggesting, that a game’s final boss will basically be a form of DLC, is ridiculous and, in my opinion, an abuse of what downloadable content could and should be. Not to mention the people whose consoles aren’t connected to the Internet. I think Epic’s use of downloadable maps in Gears 2 was a good thing. I think the extreme that he is suggesting, however, is disgraceful.

Reward your gamers for being loyal customers. Don’t make them download the game’s conclusion. Why can’t game makers get it into their skulls that customer loyalty should be rewarded rather than simply expected?