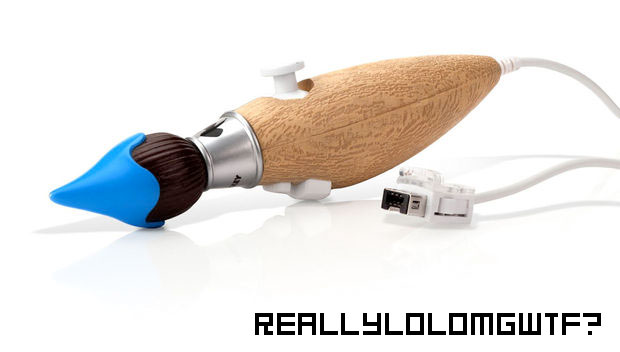 PDP sent over a press release yesterday announcing Tron: Evolution and Epic Mickey controllers it was making, and we basically ignored it. Because, you know, “LOL, controllers,” right?

Today’s slow news day forced my hand into giving them a closer look and… words are failing me right now. The Tron ones for Xbox 360, Wii, and PlayStation 3 are cool I guess; they glow and are all Tron-y. But the paintbrush Wii Nunchuk is the most outrageous, mind-bending peripheral I’ve seen since those “Freaks” controllers Game Elements released for the original Xbox and PlayStation 2.

Seriously, what the hell are we looking at here? Well, up there you see a Wii Nunchuck that looks like a damned paintbrush. PDP is also releasing a Wii Remote controller charger that only charges one remote and looks like an Evil Blot; the Mickey Mouse figure is removable if you wanted to play with him in the bathtub or something.

All the accessories will be available for the game’s launch, which looks to be holiday of this year.