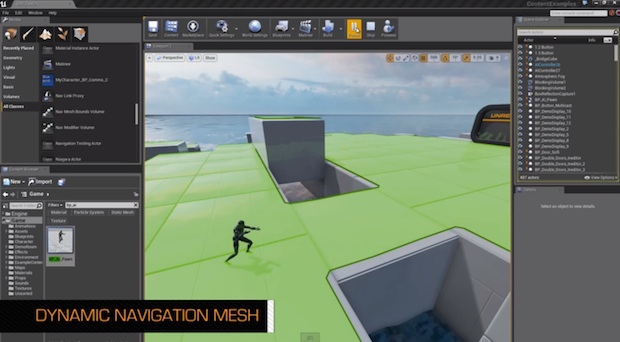 Epic Games announced a new subscription model for Unreal Engine 4 this morning. Any user can gain full access to their tools and source code for only $19 a month and 5% revenue. Developers can deploy to PC, Mac, iOS, and Android. We have new details on just what the subscription plan gets users.

A new Blueprint scripting system lets people without programming knowledge dive into gameplay logic with its visual interface. This opens the door for designers and artists to contribute, and lowers the barrier of entry for game making overall.

The new tools include:

Subscribers will benefit from a support community made of forums and Wikis. The full C++ source code will be available via GitHub, and will be freely sharable.

In a demonstration of the Blueprint system at this morning’s press conference, we saw a building created in a matter of minutes, starting with shapes, continuing onto texturing for walls and floors, then lighting, finishing with props and decorations. The system had a drop-in door automatically opening and closing when testing, with no programming required.

Other demonstrations showed just how easy it is to modify parameters. A new material system lets users play with sliders to change texture, tweaking parameters like roughness and metallic qualities, with changes instantly visible. Materials can even respond to in-game behavior. A test had the demonstrator throwing fire at different objects to show how they’ll react appropriately, with wood burning, or ice putting the fire out. Again, no programming required.

Level design tools in this Blueprint system instantly let the demonstrator drop in railing, with a slider letting him instantly tweak length of the new object, as well as free mouse movement available for placement. Levels can be designed with click and drag motions instead of programming, opening the door for fans of games like Minecraft to funnel their creativity into game making. 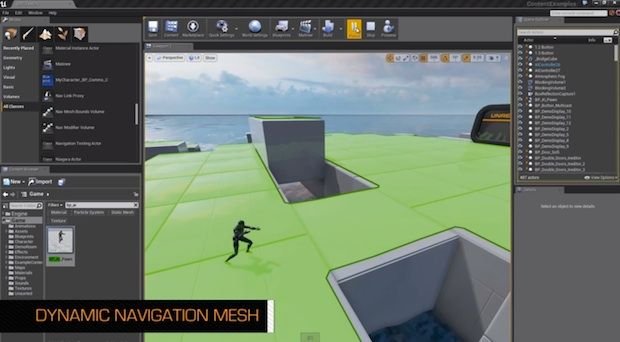 Blueprint even does simulations. We watched as the behavior of a butterfly was followed through its graph in real time. Any of the nodes could be halted to edit parameters at any time in this visual interface.

Several smaller games that were built entirely with Blueprint were shown at the end of the demonstration. A Space Invaders clone and a third-person UFO flying game looked nice. For the latter, while playing with the editing graph open, behaviors are clearly as they happen during play, allowing for easy troubleshooting.

Finally, an Angry Birds clone they called Tappy Chicken was shown to the audience. This was developed in a couple of hours in UE4, with no programming needed. Epic had a playable iPhone version available at the press conference

Imagine schools using this new plan to license UE4 for its students. Kids could soon be working on the next great indie game. Virtually anyone can be a developer now.