You see, “Mad Moxxi’s Underdome Riot” (at the very least) requires that your character is at or around level 15. Otherwise, as the game warns, you’re in for a real challenge. So I ended up playing the first two or three hours of Borderlands for what I believe may be the fortieth time. But I couldn’t stay mad at it for long, because it reminded me as to why we nominated it for Game of the Year — it’s damned fun.

So when my fresh Mordecai finally leveled up to to 15, I thought I was ready to face any challenge Moxxi could throw at me. I was wrong. Playing alone, it kicked my ass. A lot. Feeling down on myself, I checked in with Gearbox’s Matt Armstrong, Director on Borderlands and the “Mad Moxi’s Underdome Riot” DLC. While it might be true that I’m a terrible player, Armstrong kind of let me off the hook.

“‘Mad Moxxi’s Underdome Riot’ is very challenging by design,” he tells me.

Well that’s a relief to my bruised gamer ego. Hit the jump for details on what to expect when Gearbox finally unleashes the challenges of “Madd Moxxi’s Underdome Riot.” 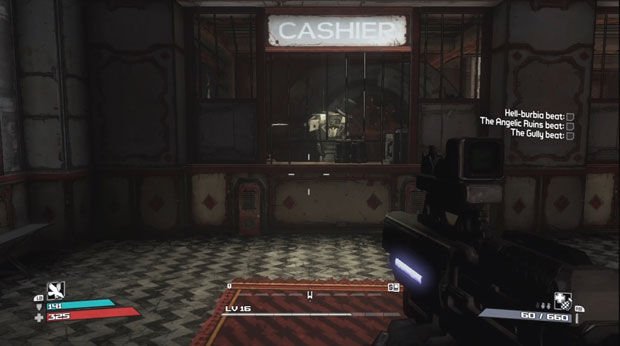 Unlike “The Zombie Island of Dr. Ned,” this second bit of downloadable content isn’t really driven by story. Sure, you’re introduced early on to Madd Moxxi, a carnival barker-like character who uses her sexuality and wiles (or lack of, as it sometimes seems) to wed (and ultimately kill) husband after husband. But that’s basically where any narrative ends and the killings begin.

Moxxi is now hosting a tournament at her Underdome, which consists of three coliseums — Hell-burbia, the Angelic Ruins, and The Gully. Each has its own look and feel — Hell-burbia, for instance looks like Donna Reed’s neighborhood… if it were ravaged by fire and populated by monsters with gastrointestinal problems. But the goal of each area is the same: Survive five rounds of five waves of Moxxi’s Underdome madness, an endless torrent of unrelenting enemies whose only goal is to make sure you don’t live to shoot your next skag.

You’re introduced to the tournament by being presented with a single mission, “Prove Yourself.” In this mission you must survive one round in each of Moxxi’s three coliseums. It’s not as easy as it sounds, as each “round” is broken up into five shorter waves. 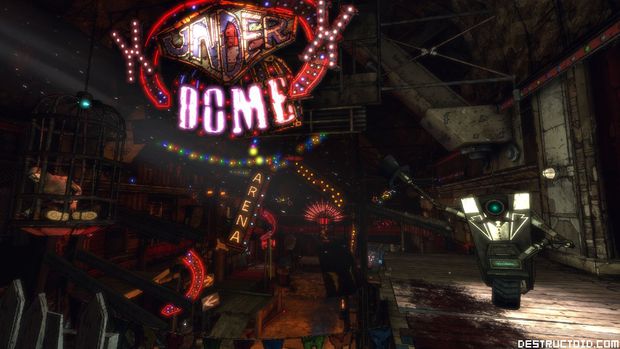 The first wave, the “Starter Wave,” is just a warm up. It’s followed by the “Gun Wave” which, as you could expect, has enemies coming at you with guns. Next up is the “Horde Wave,” which in my experience was mostly made up of a huge groups of enemies doing their best to murder me with melee weapons. The “Badass Wave” comes next, a collection of more powerful enemies with more shields and stronger weapons. Finally, the round ends with the “Boss Wave,” which features one of the game’s “boss” enemies as the center of attention, with minions making the rounds to give you a hard time.

“The waves [always] have the same names,” Armstrong tells me, “but the enemies you face in each one vary the farther you get into it.”

These waves and the types of enemies, I’m told, won’t vary. Armstrong tells me that they had considered random enemies and patterns early on, but found that letting players get familiar with the waves and the enemies led to a more tactical experience. One example he gives is being able to prepare for the horde wave, with players swapping out weapons and defensive positions because they have an idea of what to expect. 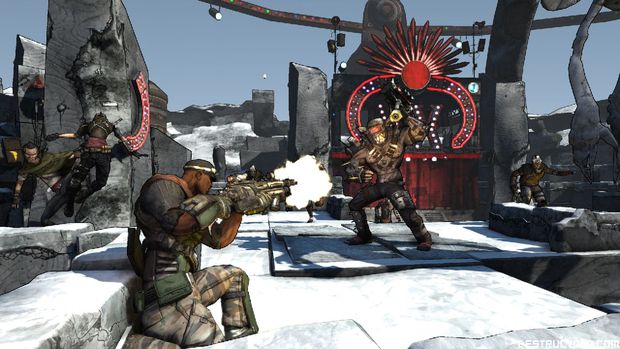 In between each wave you’re given a break, and Moxxi is kind enough to drop caches of items — huge boxes of health (indicated in purple) and ammunition (indicated by blue) — onto the playing field. The drops on the field are random, and since the enemies don’t seem to drop ammo (and rarely, if at all, drop health), it’s a mad dash to get suited up and ready to go before Moxxi starts counting backwards from five to indicate the next wave is approaching.

“Can you keep up this pace?” Moxxi shouts from her megaphone. “Don’t let this flood of flesh overcome you. The Horde Wave!”

Throughout the event, Moxxi provides commentary for both the player and the in-game cheering crowd that demands more violence and more more. She comments on the battle directly, sometimes even addressing the crowd: “Who takes care of you? Who gives you what you want?” The result makes it feel like you’re part of a sporting event, and despite the lack of any real narrative (this DLC is all about the action), seems to pull everything together rather nicely.

During the few hours I spent with “Moxxi’s Underdome Riot,” I spent a lot of time in the “Penalty Box.” This is where you go when you die, sent to a “cage” high above the coliseum where you can continue to watch the action from the sky. In my single player experience the round ends immediately — you’re shown your total numbers of kills for the game (as well as “all time”) and are given the option to restart or exit. When playing with four other players, things are a bit different.

“[The] penalty box holds anyone who dies until the end of the current wave, then they respawn,” Armstrong explains. “The penalty box is unique and quite surprising. Unlike the ‘ghost mode’ that you might expect, you can fight from the penalty box! Get a sniper rifle or a rocket launcher and help the survivors! It’s great fun with Roland to be healing his teammates by sniping them while they carry on the battle.” 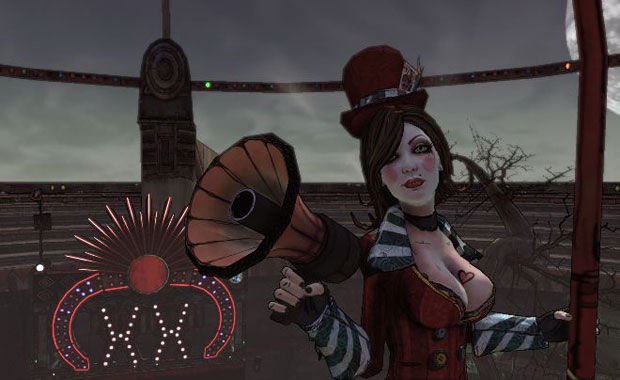 While I couldn’t complete an entire round on my own with my level 16 character (I could have use someone healing me while I carried on the battle) I’m told that the pay off is worth it. At the end of each round, Moxxi drops loot directly beneath her stage, with each successive wave generating more and better loot. But like the in-between-wave item drops, they won’t last — they only stick around for a few seconds, so you’ll have to act fast to pick up the goods.

The DLC features only one mission, “Prove Yourself.” Once completed, players can enter a bigger tournament, which contains all new Achievements and Trophies. The challenges get successively harder, with Moxxi adding new rules and wave modifers. Maybe shotguns will be more powerful during one wave, with other weapons not performing as well. Or perhaps your health will drain as time goes on, so you’ll have to push to clear the wave before you die. Yes, “Mad Moxxi’s Underdome Riot” aims to be challenging — I don’t “just suck.”

“This was built for co-op,” Armstrong tells me, stating what seemed obvious after my numerous failed attempts and surviving solo. “Bring a friend and work together. The more players, the better you’ll do.”

Sure, it’s possible to play “Mad Moxxi’s Underdrome Riot” alone. But Armstrong points out that while many hardcore players might be looking forward to taking on the challenge solo, “the best experience, especially for the casual player, is co-op.” 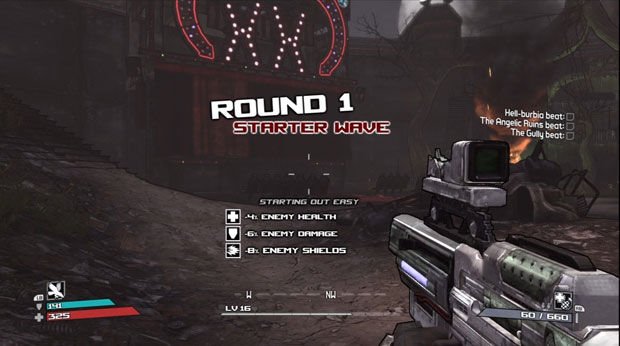 He also gives me an out, an excuse as to why I simply couldn’t overcome Moxxi’s challenges.

“Generally, we expect that anyone without a class mod will have a hell of a time on this,” he confirms. “He’s coming in quite a bit earlier than most players would. We actually considered setting the [minimum] level for all of the enemies to be level 20 so that the players would wait until they had the class mod to try it.”

I look forward to using my leveled up characters and finding some friends when the DLC hits Xbox 360 on December 29. (“Mad Moxxi’s Underdome Riot” hits PlayStation 3 on January 7; a PC release is slated for sometime in 2010.)