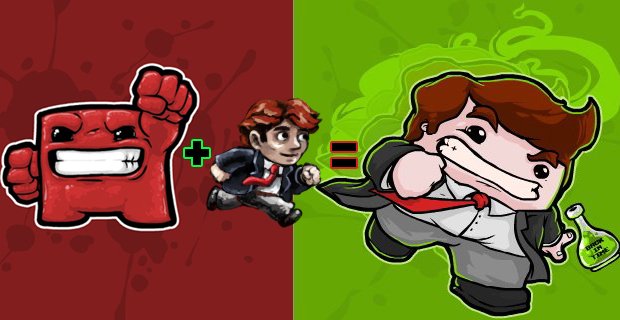 So we already heard that Super Meat Boy was going to have twelve unlockable characters from other indie games, but for all we knew, they were going for nobodies like Pamela Anderson or Anthony Burch. Looks like Meat Boy wont be slumming it like that. The game’s developers have gone straight to the top of indie mountain and come back down with Tim, the star of 2008’s art game of the millennium; Braid.

Turns out that Edmund McMillen, the creator of Super Meat Boy, is also the man behind the bulk of Braid‘s animation and character designs. It makes sense that Edmund would want a character he co-created show up in his latest game, albeit with a Meat Boy-flavored makeover (for visual consistency, of course).

From the looks of that pic, it appears that Tim will have his endless supply of time-reversal potion with him, so we can expect that he’ll play the same way he always has. If you want a better idea of how he’ll look in-game, take a peek the animated Meat Boy sprite sheet at the bottom of this post, and zoom in all the way on the bottom-left hand corner.

So what do you guys think; are you happy to see Tim’s return to gaming, or does his new look (and first appearance on a non-Microsoft OS) have you ready to start a petition?