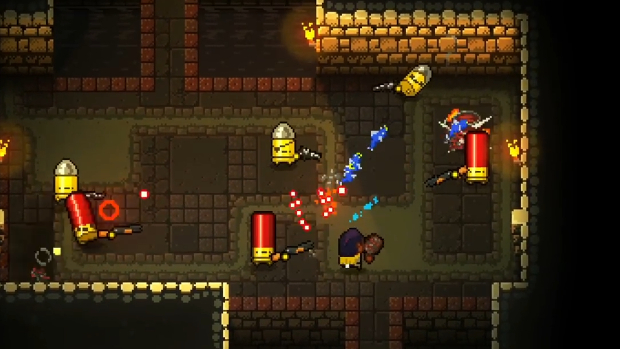 Devolver Digital has announced it is publishing Enter the Gungeon next year.

Something about, “A gun…THAT CAN KILL THE PAST” just won me over. I don’t even have to understand what it means. Plus there’s table flipping cover and a giant pink laffy taffy laser.

Apparently you are able to choose between a variety of playable characters, each seeking the legendary gun that can destroy their tragic pasts. Along the way, you’ll slaughter hordes of Gundead and find weapons that shoots things like bullets and weapons that shoot things like, “a volley of rainbows, fish, foam darts and bees.”

Cute rolling animation, cute enemies to explode, crazy guns. I’d like to play this on my Vita, but PS4 and PC/Mac/Linux will have to do.