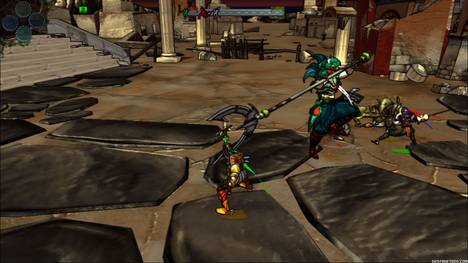 It looks like one of the first titles that will (presumably) making money out of the newly announced Xbox LIVE Community Games initiative will be Colosseum, developed by Sweden-based Shortfuse Entertainment.

A multiplayer arena fighting game, Colosseum has you choosing from 12 different armor and weapon sets to defend an arena. Fighting well will earn your praise in the form of cheers, performing cowardly will result in booing from the crowd. As you play through the game, you’ll complete challenges that will earn you new armor, weapons, and powers.

No word on pricing or exact release details, but we should be seeing Colosseum this fall along with the new dashboard update, when Xbox LIVE Community Games goes live. We haven’t had a chance to go hands-on with the title, but its cel-shaded visuals at least give it an interesting look. It’s like Ubisoft’s Prince of Persia, but probably nothing at all like Ubisoft’s Prince of Persia.

Whether or not the gameplay stands up remains to be seen. Is anyone interested in paying for community developed titles like Colosseum? Without having even played it, let’s put a price on it now. 200 MS Points? 800 MS Points? Somewhere in between?