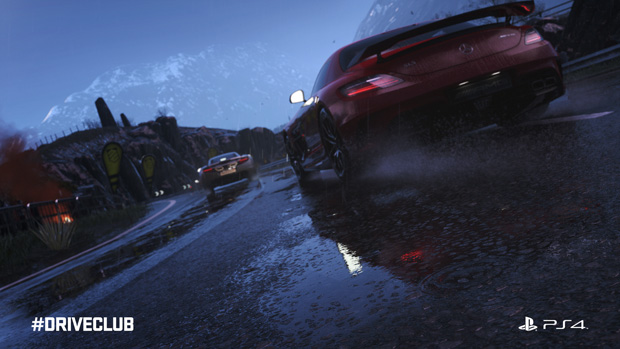 Those screenshots of Driveclub back at E3 — where Evolution Studios demonstrated its dynamic weather system for the PlayStation 4 racer — looked slick. But they were mere images. A month later, we now have footage of this stuff, albeit short clips that aren’t super high resolution.

All the same, the rain, shown below in Driveclub‘s take on Scotland and Canada, impresses. There’s a lot going on behind the scenes to achieve these results. According to art director Alex Perkins, “The cloud cover and conditions you choose will dictate how much snow and rain will fall. The wind direction and speed determines where snow will settle. Then when it stops, the temperature and height of the sun governs how quickly clouds evaporate and roads dry out.”

Players will be able to adjust the weather conditions in their races, though specifics on that customization aren’t known yet. “We don’t want to just offer fixed settings for ‘rain’ or ‘snow,’ we want it to be dynamic and exciting,” noted Perkins. “We’re still working on how best to present this to you and we’ll show more closer to launch.”