Crossovers are a simple but straightforward way to create fun. Ever since we were kids, many of us have fantasized about what Favorite Character X might do if they met Favorite Character Y, or entered Favorite World Z, or fought Favorite Enemy AA. They’re not without complications, but they’re primarily introduced in the first place to make something more fun rather than enhance drama or so forth. If simplistic fun is a game’s primary goal, crossovers involving our favorite characters is a reliable way to drum up excitement, so long as they don’t impair the original material or do anything else to distract from bigger design intentions.

Go figure that freemium mobile games use so many crossovers, especially within gacha games. It’s only natural that introducing iconic heroes from other IPs is a reliable way to spark interest in games that revolve around collecting heroes. It’s a promotional tactic, that’s why they’re also called cross-promotions. And yet I always have a ridiculous, goofy grin on my face whenever I read news such as Deus Ex characters joining Final Fantasy Brave Exvius.

To be fair, I get Anthony’s anxiety, Deus Ex deserves more than just this in its future, and I felt a similar worry years back when Breath of Fire VI was announced as a mobile game. But a cross-promotion would have little value to a publisher if the publisher believed the crossing-over IP didn’t have enough value itself. This would probably have happened even if we already had another Deus Ex game in development right now. Heck, Exvius ran a Tomb Raider event a while ago, and nobody took that as a sign that Tomb Raider is getting the cold shoulder. That’s why I always view this sort of event with starry-eyed fascination instead of disappointment.

Just to be clear, 99% of the time, crossover events in gacha games are just that — events. Time-sensitive events that have ended long before the time of this writing, and which are unlikely to repeat. So it’s almost a guarantee that if you were to start playing any of these games right now, you wouldn’t be able to access this content no matter how much you play. I also strongly advise against spending money only to get a chance at such crossover characters, because as always, I insist that this is the wrong reason to spend money on gacha games despite that this is how they are designed. I want to share these anyway because some of these are so delightfully absurd that their existence deserves to be acknowledged, much like the fact that King K. Rool can punch Lucina in Smash Bros. Just on a cheaper scale.

Many decently-sized mobile games are quick to take advantage of their publisher’s expansive libraries and draw upon them for internal cross promotions. Fate/GO has made a few Servants out of other Nasuverse works, and the aforementioned Final Fantasy Brave Exvius has jumped at the chance to mix Square Enix’s myriad JRPGs with Eidos’ western third-person-shooter roster. These are amusing in their own right, but only the biggest of the big tend to pull interest from other companies all over the world. That’s where the really weird crossovers come in.

For example, take Gumi’s other RPG whose title starts with “Brave”, Brave Frontier. I’m personally not sure what makes this one so popular, but the statistics explain the plethora of cross-promotions. Even putting aside other Gumi-published mobile games like Phantom of the Kill and Brave Exvius, Brave Frontier’s pulled in a wide assortment of anime characters, many of which come from various fighting games or RPGs. The King of Fighters, Guilty Gear, Shin Megami Tensei IV, Secret of Mana, and so on.

At first, I thought that the most unusual crossover in this roster would be the Vocaloids. Yes, it makes sense to want to have an international virtual pop sensation on your side, but it still seems about as unnatural as any other pop idol (like, say, Ariana Grande) joining a JRPG. Yet as it turns out, the one that sticks out the most in that collection is The Hobbit. You know, that iconic western novel that, despite influencing the entire fantasy genre even in Japan, is about as aesthetically distant from anime as you can get? Yeah, Bilbo Baggins was in an anime game, chibi re-design and all. Why? Let’s be honest, they just wanted a slice of that cross-promo cash, but the sheer image of Bilbo fighting alongside anime protagonists is extremely entertaining all the same. 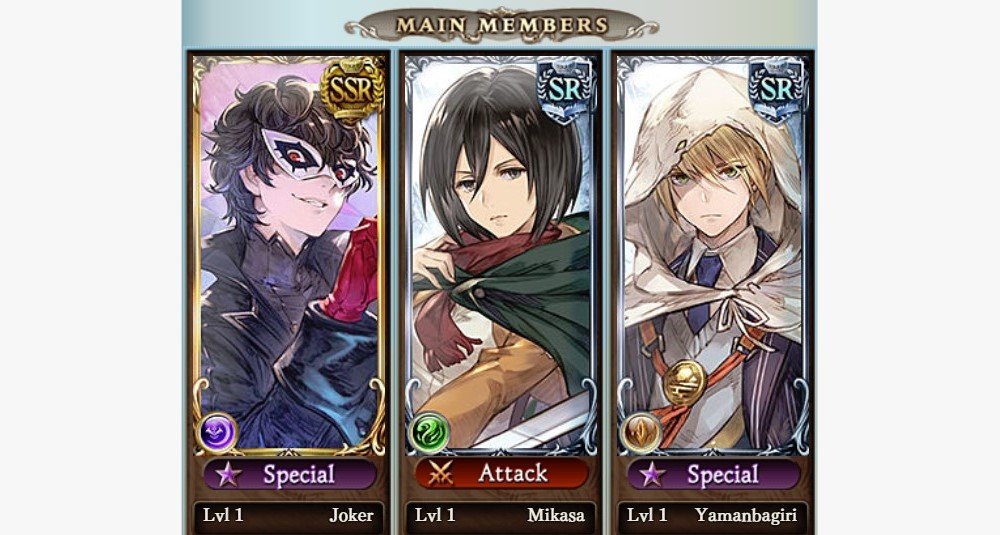 A mobile game whose popularity I do understand would be Granblue Fantasy. Granblue’s English translation requires jumping through a few moonrune-riddled hoops to start playing, but the surprising amount of effort put into its stories — including cross-promo events, even if those often rely on excuse plot instigators like “an elemental god pulled a portal to another game out of its butt” — make it one of the few mobile games I can recommend for its narrative. Not that crossover characters get any chance to interact with each other via story scenes, but the fact that they’re given enough writing for a script of an anime episode makes it more amusing to mix and match them in actual gameplay.

The girls of Love Live can hold a concert with the boys of The Idolmaster SideM, except instead of just singing they can also stabbing monsters in the face while doing so. Cardcaptor Sakura can support Detective Conan, who has no idea why this theoretical scenario puts him on a mixed-element team with Mikasa and Levi from Attack on Titan. Joker from Persona 5 can join forces with SEGA dating-sim romance options like Gemini Sunrise or street-renowned Capcom fighters like Ryu.

All these crossovers from every corner of weebism make Granblue look like a melting pot of anime tropes, which it already is in its original material, actually. As silly as they are, thanks to Granblue‘s episodic but well-put together writing, these crossovers somehow feel semi-believable even in a game that usually takes its story more seriously than the typical gacha excuse plot of “summon dudes, stab the dark lord, repeat”. Usually. This is the same game that made a joke party member whose personality is literally “likes fidget spinners” so we can’t pretend that it isn’t above doing dumb stuff for the reason of “because we can” either. No, I will never let that go, Cygames must live with its memes.

But if mobile giants like Granblue have influence across the bounds of anime, a titan like Puzzle and Dragons knows no bounds. Pretty much everyone, and I mean everyone, wants a piece of Puzzle and Dragons‘ pie because, mobile-wise, it’s the most financially successful pie. Even a fraction of the cross-promos P&D has run could be worth its own listicle. For the sake of focusing on how far they reach, let me paint an image of just a single battle using previous promotions…

The party scatters in the wind, decimated by Frieza’s blast of dark ki. Shinji sobs furiously, clinging to his EVA in a desperate attempt to resist the urge to get out of the robot again. The robots that form Voltron (specifically the NA Netflix series Voltron) quiver momentarily before they reassemble. A tower of Baskin Robins ice cream teeters dangerously close to the ground, saved only by a desperate elemental spirit’s dive. Hello Kitty grips the pancakes in her hand with heckfire in her eyes. But a black glove stops her arm. “I have a plan,” Batman reassures her. He lets go.

Then Batman matches a crapton of colored orbs and nukes Frieza with a rainbow of death, making the space tyrant drop an egg which contains a clone of himself that joins the party.

I may have cheated by mixing NA-exclusive collabs with JP-exclusive ones. It still shows how dumb these crossovers can be and how much more so they might possibly become in the future. And I love that kind of dumb fun.