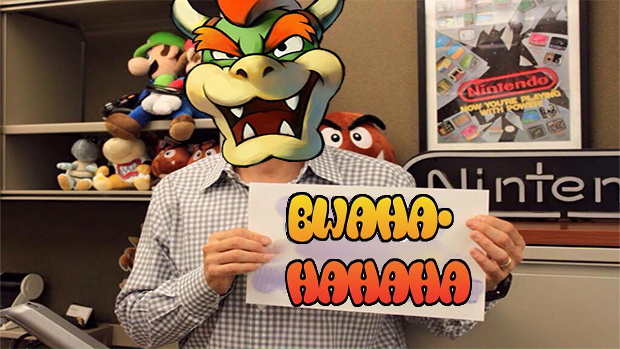 The warm welcome for Doug Bowser, the new Vice President of Sales at Nintendo of America, is over after it was reported female employee kidnappings have increased 500% since he started earlier this week. More than 10 beautiful blonde employees and the one requisite brunette have been missing for more than 24 hours. Witnesses say they spotted Bowser laughing maniacally as he threw the women into his airship and flew away. Nintendo spokesman Kyle Toadsly says management is working with Bowser to get him to stop kidnapping their employees.

“We’ve had several meetings with Doug in hopes that we can curb this kidnapping problem of his,” Toadsly said in a press conference today. “We’ve jumped on his head, we’ve thrown fireballs at him and last night we dropped him into a vat of lava. We were worried that last one might have killed him but were relieved when his skeleton climbed out of the lava and proceeded to pitch a really great idea to increase sales to inner-city transgendered latinas, which is a really hard market to reach.”

Brian Sequor, head of security at Nintendo of America, says his team has had to clock in dozens of overtime hours to get all the kidnapped girls back.

“Yesterday we were able to find several of the girls in the art department,” Sequor said. “They thanked us for saving them but informed us that the rest of the girls are in another building. Probably the cafeteria.”

Sequor believes Nintendo of America can stop Bowser once and for all with another hire.

“Right now the plan is to hire a Marketing Director named Mario. We feel that is the best shot at getting these girls back, but if we’re unable to find one we may have to resort to bringing on a janitor named Luigi. I guess either will work but we have to do something soon because this problem is only going to get worse next Thursday which is bring your child to work day.”