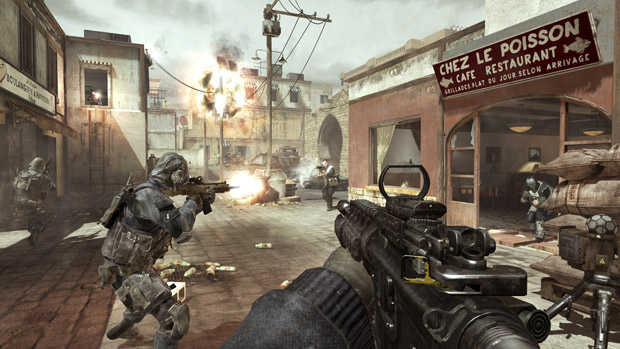 Back in May, we got our first look at Call of Duty Elite, a set of tools introduced by Activision to enrich the game experience. Introduced to players was in-depth stat tracking, video sharing, training tools based on your gameplay experience, and more.

What Activision wasn’t talking about is how it would integrate with the upcoming Modern Warfare 3. At Call of Duty XP this week, Activision is finally ready to spill the beans on how Elite and Modern Warfare 3 will work together to provide a deeper social experience than before.

First up is the obvious: Facebook connect. Players will be able to connect Elite with their Facebook accounts, and will then be able to see (and play with) their Facebook friends right inside Modern Warfare 3. Those who have participated in the Uncharted 3 beta might note that Naughty Dog included a similar service, although that was handled all directly inside the game.

“But Facebook integration wasn’t enough,” said Infinity Ward’s Robert Bowling, “we wanted to take it even further. So with Call of Duty Elite we’re not only letting you play with friends you already have, but also help you find new ones.”

Elite will do this by allowing you to connect — and play — with gamers who have similar interests. Whether it be that you’re fans of a particular sports team, musician, or have an affinity for a certain play style, finding and joining these Elite groups will allow you to directly connect with these potential new friends right inside Modern Warfare 3.

“It takes the anonymous network of Call of Duty and makes it a real community,” adds Michael Condrey of Sledgehammer Games, the co-developer of Modern Warfare 3 alongside Infinity Ward.

Additionally, Elite will be the jumping-off point for clan support in Modern Warfare 3. This includes not only creating clans, but helping to create private clan matches, sharing schedules, having a personalized clan message of the day, and more.

At a private press event held on the eve of Call of Duty XP, Activision let us get hands-on time with the console and mobile versions of Elite. While the Black Ops beta allows players to access their Elite content in a web browser, the service will be expanded to consoles and mobile devices, including Android, iPhone, and iPad. The console version I used (launched either from within game or as a separate application, like you would an Xbox Live Arcade game on your 360) was laid out in a similar fashion to the Elite web site. While obvious tweaks were made to navigation, all of the content was available to view, including stats, heat maps, and more.

The mobile apps even appear to have more functionality than allowing you to simply see your stats n’ stuff on the go. Players will be able to browse their data away from their console on a mobile device, and use said data to select different in-game load outs, for example. The next time players boot up Modern Warfare 3, those load out selected on the go will be ready and waiting for them in the game.

All of this Modern Warfare 3 functionality, including all of the features mentioned previously by Activision, will be free out of the box. Check out our “premium” Elite news for more details on what players will get for a $50 annual subscription.