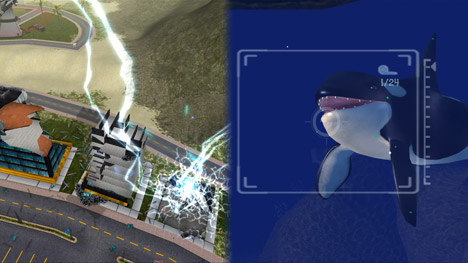 Elements of Destruction has you controlling a mad scientist who’s bent on destroying cities by harnessing the power of lightning, tornadoes, and earthquakes. The game sounds good in theory, but it’s being developed by the same guys who did Screwjumper!, so I’m not holding my breath.

Taking a page from Endless Ocean, Sea Life Safari is all about photographing fish and other assorted sea creatures. If filling up your scrapbook with pictures of marine life sounds like a good time to you, then by all means look into Sea Life Safari.

While I’m not counting the seconds until these games come out, it is nice to see something a little more original on XBLA rather than another mediocre top-down shooter.