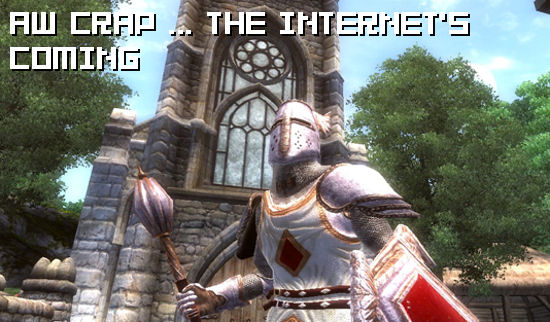 A while ago, Bethesda’s parent company ZeniMax was spotted stumbling out of a seedy back alley bar, clutching only a bottle of gin and a domain name — elderscrollsonline.com. The Internet leapt on this with fervor, eagerly anticipating the news that it could only hope was coming — an Elder Scrolls MMORPG. Guess what … the Internet was right about that.

Bethesda’s very own Pete Hines has confirmed that yes, an MMORPG installment of the wildly popular Elder Scrolls series is on the way. In the announcement, Hines also stated that the company had already put $300 million into the project — that’s a fair bit o’ gold! Said Hines:

I don’t think that this funding changes our focus in terms of what we are about and are trying to accomplish. The additional resources will allow us to expand our publishing efforts-both our own titles and those of other studios-and to pursue development of more titles, working with internal and external development teams.

So there you have it. Elder Scrolls Online is a go, and I think it’s safe to say that World of Warcraft may have its first legitimate challenge to the MMORPG throne, don’t you? We’ll see what happens in the future, but for now, Hines is saying nothing else. Personally, I am eager as hell to watch this one develop.

[Update: It seems that the original story which Jim sourced in this article jumped to more than a few conclusions. We just got off of the phone with Bethesda’s Manager of PR and Marketing Erin Losi, who wanted to clarify a few things.

For one, Bethesda has not announced or confirmed that an Elder Scrolls MMO is in the works. As she points out, the $300 million dollars in question was received by Bethesda’s parent company, ZeniMax Media. This money will be invested across a “multititude of projects.”

As for the an Elder Scrolls MMO, Losi told us that no such announcement has been made. Looking at the above quote from the original QJ.net story, it appears that some drastic leaps in logic were made to reach conclusion of a “confirmation.” Regarding the registered Elder Scrolls Online domain, Losi points out that this is standard practice, where Bethesda will snatch up a number of domains related to their licenses.

We apologize for any confusion we might have caused with this story, and for now, the Elder Scrolls MMO simply doesn’t exist. – Nick]